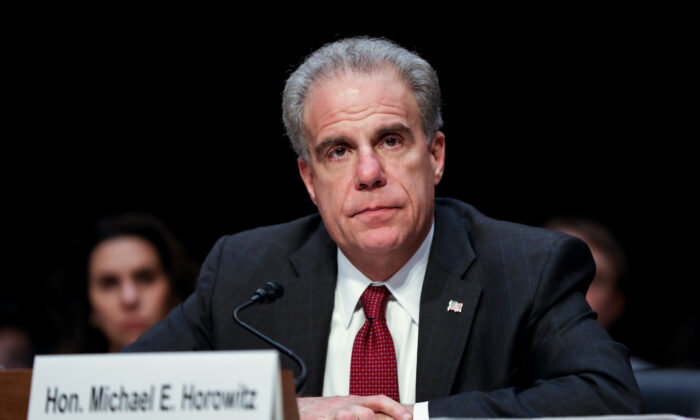 The interview came just a few weeks after Horowitz’s office announced on Jan. 15 that it was “initiating a review to examine the role and activity of DOJ and its components in preparing for and responding to the events at the U.S. Capitol on Jan. 6, 2021.” The IG’s office also is investigating “whether any former or current DOJ official engaged in an improper attempt to have DOJ seek to alter the outcome of the 2020 Presidential Election.”

In a wide-ranging discussion that also included journalist Bob Woodward, Trump was repeatedly vilified, particularly by Woodward and Goldsmith, with Woodward stating that he believed that “you could argue” Trump “should be impeached for the handling of the virus.” Goldsmith stated that “Trump’s performance during COVID was an utter failure of leadership.”

Neither man acknowledged Trump’s early actions in shutting down travel from China on Jan. 31, 2020, nor did Horowitz exhibit any signs of disagreement with Goldsmith and Woodward, although he was clearly more careful with his wording.

At one point during the discussion, Goldsmith noted that the Trump administration represented a “most extraordinary and unprecedented assault” on our norms and our institutions. Goldsmith then asked Horowitz, “what happens when a president is elected precisely to break norms.” Horowitz responded, saying, “I agree with Bob and I agree with you. That was what happened here, it was norm-breaking.”

He told Goldsmith that “it was certainly a challenging time” for the IG community and then segued into Trump’s firing of two inspectors general. Horowitz stated that “it could fairly be said” that both IG’s were fired “not for misconduct” but for “doing their jobs.

But in making this claim, Horowitz overlooked crucial facts behind Trump’s firing of Intelligence Community IG Michael Atkinson. When Trump fired Atkinson, he noted that “it is vital that I have the fullest confidence in the appointees serving as Inspectors General. That is no longer the case with regard to this Inspector General.”

Atkinson had bestowed the status of “whistleblower” on a then-unnamed individual who made a formal complaint on Aug. 12, 2019, alleging that Trump had “pressured Ukrainian President Volodymyr Zelensky” during a July 25, 2019, phone call to “investigate the Bidens for political purposes” and that Trump had made military aid to Ukraine contingent on the Biden probe.

Zelensky publicly denied that he was pressured by Trump, stating that “There was no blackmail. I had no idea the military aid was held up,” during a press conference. Nevertheless, these allegations led to the first impeachment of Trump on Dec. 18, 2020, by a Democratic-led House. The Senate acquitted the president of the charges on Feb. 5, 2020.

Paul Sperry of Real Clear Investigations alleged that the whistleblower was a then-33-year-old CIA employee named Eric Ciaramella, “a registered Democrat held over from the Obama White House” who had “previously worked with former Vice President Joe Biden and former CIA Director John Brennan, a vocal critic of Trump who helped initiate the Russia “collusion” investigation of the Trump campaign during the 2016 election.”

Ciaramella reportedly “had no direct knowledge of the phone call” but instead had received leaked details of the call from one of the “American officials who were on the call with the president.” Later reports indicated that it was Alexander Vindman who was the source of the information.

According to an unclassified version of an opinion issued by the Office of Legal Counsel (OLC) on Sept. 3, 2019, the complaint was sent by Atkinson to Acting Director of National Intelligence Joseph Maguire on Aug. 26, 2019, with Atkinson maintaining the allegations were “an urgent concern” and were therefore subject to the Intelligence Community Whistle Protection Act (ICWPA).

However, as Maguire later testified, he felt that the allegations “did not appear to fall into the statutory framework” of the ICWPA and as a result, he consulted the OLC. After a review that included Atkinson, the OLC determined that the “alleged misconduct is not an “urgent concern” within the meaning of the statute” and did “not require that the DNI transmit the complaint to the intelligence committees.”

“The complaint does not arise in connection with the operation of any U.S. government intelligence activity, and the alleged misconduct does not involve any member of the intelligence community. Rather, the complaint arises out of a confidential diplomatic communication between the President and a foreign leader that the intelligence-community complainant received secondhand. The question is whether such a complaint falls within the statutory definition of “urgent concern” that the law requires the DNI to forward to the intelligence committees. We conclude that it does not.”

The OLC’s opinion noted that the matter was being addressed through the appropriate legal channels as Atkinson’s “letter and the attached complaint have been referred to the Criminal Division of the Department of Justice for appropriate review.”

Rather than accepting the opinion from the OLC, Atkinson sent the complaint to Schiff, who responded with a public letter to Maguire on Sept. 10, 2019, demanding that the complaint be sent to his committee immediately. Schiff also falsely accused Maguire of “withholding from the Committee an authorized and protected whistleblower disclosure.”

In addition to the OLC opinion, there was also an even more fundamental disclosure issue at play. As Maguire stated in his testimony, “many of the allegations in the complaint are based on a conversation between the President and another foreign leader” and as such, were subject to executive privilege. As Maguire noted, “because of [the Executive Privilege], we were unable to share the details of the complaint with the committee.”

Notably, Atkinson admitted in his letter that he “did not request access to records of the President’s July 25, 2019, call with the Ukrainian President.”

Had he done so, he would have discovered numerous discrepancies between the complaint and the actual call by the president.

These important details should have been well known to Horowitz—particularly given his status as the DOJ’s inspector general. That Horowitz was either unaware of these crucial details or chose to simply ignore them is alarming.

In addition to his position on Atkinson, Horowitz also stood by an earlier finding that “the FBI complied with its policies in opening the Crossfire Hurricane investigation in July 2016.” This finding had been disputed by both former Attorney General Bill Barr and special counsel John Durham, both of whom felt strongly enough to issue statements on the matter.

Durham’s statement noted that “we advised the Inspector General that we do not agree with some of the report’s conclusions as to predication and how the FBI case was opened.”

Barr issued a longer statement, noting that in his view, “The Inspector General’s report now makes clear that the FBI launched an intrusive investigation of a U.S. presidential campaign on the thinnest of suspicions.” Barr continued, noting that he believed the evidence used by the FBI was “insufficient to justify the steps taken.”

Horowitz did repeat past criticisms of the FBI’s actions, noting that “the FBI failed in numerous ways in its representations to the Justice Department” and to the “FISA Court in seeking FISA applications for Carter Page.” Horowitz also stated that his two primary findings have “stood the test of time.”