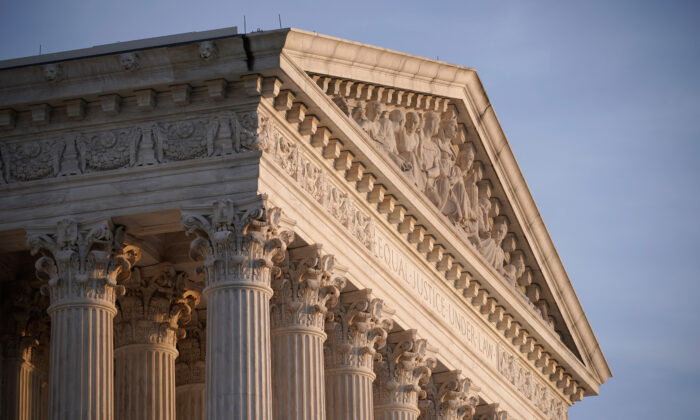 The Biden administration changed its position on an upcoming Supreme Court appeal dealing with Arizona’s electoral integrity laws, disavowing the previous administration’s interpretation of anti-discrimination provisions of the Voting Rights Act of 1965.

Although the Biden administration won’t present oral arguments in the case or update a friend-of-the-court brief filed by the Trump administration, it signaled to the justices and the public that it’s leaving the door open to adopting a more aggressive interpretation of the statute in the future.

Section 2 of the law forbids voting practices that result “in a denial or abridgment of the right … to vote on account of race or color [or language-minority status],” and provides that such a result “is established” if a jurisdiction’s “political processes … are not equally open” to members of such a group “in that [they] have less opportunity … to participate in the political process and to elect representatives of their choice.”

“That text must be construed in light of Section 2’s constitutional context, as an exercise of Congress’s authority to enforce the Fifteenth Amendment’s ban on intentional discrimination,” the Trump administration’s brief filed last year stated.

The filing comes as the litigants prepare to present oral arguments to the Supreme Court in the case on March 2.

The case is two cases that the court consolidated. The first is Brnovich v. Democratic National Committee (DNC). The second is Arizona Republican Party v. DNC. The reach of Section 2 of the Voting Rights Act of 1965 is at issue.

As The Epoch Times previously reported, the Supreme Court agreed on Oct. 2, 2020, to hear the challenge by the state of Arizona and Arizona Republicans to Democratic Party efforts to relax electoral integrity measures and throw open the state to ballot harvesting and out-of-precinct voting. This meant Arizona’s current ban on both practices remained in place for the Nov. 3, 2020, election.

The DNC strategically filed a flurry of lawsuits in battleground states in the 2020 election cycle in hopes of changing state voting rules in time for the recent elections. Many of the lawsuits were successful.

One provision is an “out-of-precinct policy,” which doesn’t count provisional ballots cast in person on Election Day outside of the voter’s designated precinct.

Another provision is a “ballot-collection law,” known as H.B. 2023, that permits only specific persons such as family and household members, caregivers, mail carriers, and election officials to handle another person’s completed early ballot. Most states require voters to vote in their own precincts, and about 20 states limit ballot collection, according to court documents.

Arizona’s law, enacted in 2016, made it a felony, punishable by a $150,000 fine and up to two years in prison, to collect and deliver another person’s completed ballot, with the noted exceptions.

In a letter to the justices, Deputy Solicitor General Edwin Kneedler acknowledged that the previous administration filed a friend-of-the-court brief supporting Arizona and Republicans in the cases, “taking the position that neither Arizona measure violates the results test under Section 2 of the Voting Rights Act and that the court of appeals erred in overturning the district court’s finding of no intentional discrimination.”

But following the change in administration, “the Department of Justice has undertaken a reexamination of the issues in these cases and a reconsideration of the framework for reviewing vote-denial claims under the results test of Section 2 of the Voting Rights Act as articulated” by the government in the brief.

The Biden administration now believes that “although it does not disagree with the conclusion in that brief that neither Arizona measure violates Section 2’s results test, the Department doesn’t adhere to the framework for the application of Section 2 in vote-denial cases set forth in the brief.”