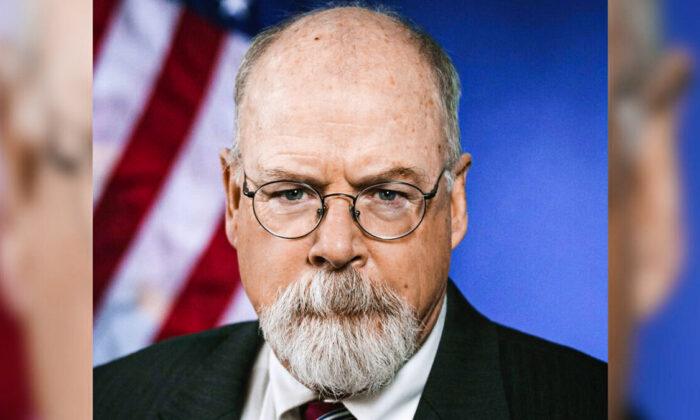 The Justice Department is set to produce a “large volume” of classified materials this week in the case against the main source for former UK spy Christopher Steele’s dossier on the 2016 Trump presidential campaign, according to special counsel John Durham.

The “Steele dossier” contained allegations that then-presidential candidate Donald Trump colluded with individuals linked to the Russian government to help him win the 2016 presidential election against Hillary Clinton.

In a filing, Durham asked a judge in federal court in the Eastern District of Virginia for a deadline extension on the production of the classified discovery, citing the Classified Information Procedures Act, which establishes procedures to protect classified information in criminal cases.

He also cited the ongoing Russian invasion of Ukraine as a reason for the extension.

The deadline was initially set for March 29, and Durham asked for an extension until May 13.

Igor Danchenko, a Eurasia political risk, defense, and economics analyst, was identified in July 2020 as the primary source for the Steele dossier.

The analyst provided information to Steele, who was hired by Fusion GPS, a Washington-based research strategic intelligence firm, to conduct opposition research on members of the Trump campaign during the 2016 election.

In turn, Fusion GPS was retained by law firm Perkins Coie on behalf of the Democratic National Committee.

Danchenko previously told the FBI that he obtained the information that was published in the dossier by “word of mouth and hearsay” from a network of sub-sources in Russia. He was charged in November 2021 with five counts of making false statements to the FBI in 2017 when he misled officials about the sources of the information he provided to Steele.

According to the November indictment, all of Danchenko’s alleged lies “were material to the FBI because … the FBI’s investigation of the Trump Campaign relied in large part” on the dossier to obtain warrants to surveil former Trump aide Carter Page.

“The FBI ultimately devoted substantial resources attempting to investigate and corroborate the allegations contained in” the dossier, including whether Danchenko’s sub-sources were reliable, the indictment states. The dossier and information provided by Danchenko “played a role in the FBI’s investigative decisions and in sworn representations that the FBI made to the Foreign Intelligence Surveillance Court throughout the relevant time period.”

In December, he signed a waiver agreeing to be defended by the same law firm representing members of Hillary Clinton’s 2016 presidential campaign even though that could pose a conflict of interest, The Washington Examiner reported.

Trump had repeatedly denied accusations that he colluded with Russia in an effort to win the 2016 presidential election, claiming he was the target of a “witch hunt” designed to discredit his presidency.

The dossier has been exposed as a collection of lies and made-up stories, prompting a number of criminal, congressional, and inspector general investigations into how the reports were used as the basis for surveilling Trump campaign officials.

Durham also made a similar request for an extension earlier this month, again citing delays due to recent events in Ukraine, in a separate case.