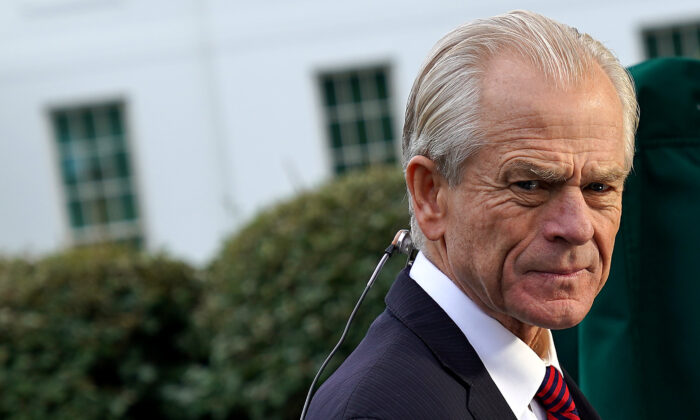 The Justice Department has sued former White House trade adviser Peter Navarro for allegedly violating a record-keeping law, asking the latter to turn over private emails for while he was working for former President Donald Trump.

“Mr. Navarro has refused to return any Presidential records that he retained absent a grant of immunity for the act of returning such documents,” the lawsuit (pdf) says, adding that the ex-Trump aide “is wrongfully retaining Presidential records that are the property of the United States, and which constitute part of the permanent historical record of the prior administration.”

Filed on Aug. 3 in a federal court in Washington, the document alleged that Navarro used “at least one non-official email account” while working in the White House but failed to copy those emails or messages constituting Presidential records to his government email account within 20 days as required by the Presidential Records Act.

The National Archives and Records Administration (NARA) was also supposed to receive them before or shortly after Trump left office but is yet to, according to prosecutors, who said between 200 and 250 of the emails on Navarro’s private account should have been collected.

The department further accused Navarro of declining to turn in the retained records without a grant of immunity. Navarro’s lawyers refuted such claims, arguing that their client “has never refused to provide records to the government.”

“As detailed in our recent letter to the Archives, Mr. Navarro instructed his lawyers to preserve all such records, and he expects the government to follow standard processes in good faith to allow him to produce records. Instead, the government chose to file its lawsuit today,” his attorneys told The Hill in a statement.

The latest case comes two months after a grand jury indicted Navarro on June 3 for refusing to give documents and testimony early this year to the House select committee investigating the Jan. 6 Capitol breach in 2021.

The former White House trade adviser had pleaded not guilty on June 17 to two misdemeanor counts of contempt of Congress, citing executive privilege due to his former position at the White House under the Trump administration, before rejecting a plea offer to a single count in July.

Bennie Thompson (D-Miss.), chairman of the Jan. 6 committee, rejected Navarro’s claims, claiming that privilege belongs to the president but not a White House official, despite the emails involving the former president.

However since January, NARA has handed documents and records from the Trump administration’s time in office to the Jan. 6 House Committee, despite Trump’s attempts to ask the Supreme Court to block the release.