2
CDC: 222 People at the Grand Canyon Got Sick With ‘Explosive’ Symptoms
17hr
sharecomments 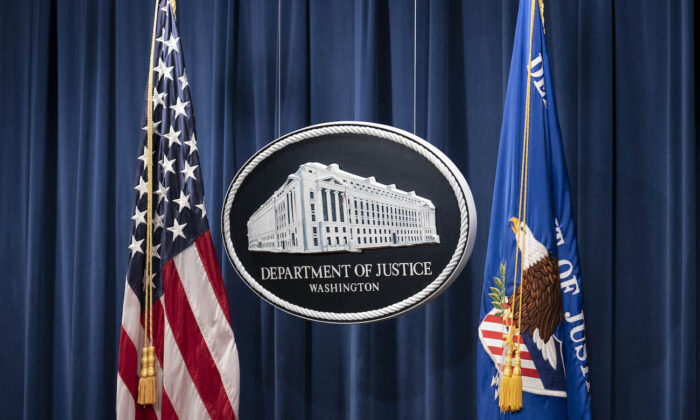 A sign for the Department of Justice is seen in Washington on Jan. 12, 2021. (Sarah Silbiger-Pool/Getty Images)
US News

The Department of Justice has retracted its claim that it seized a “fully constructed U.S. Capitol Lego set” from an accused Jan. 6 Capitol breacher.

But in a supplemental motion, authorities said that they erred in conveying that claim.

“Please note that after a review of the photographs from the search, there appears to have been a miscommunication and that statement appears to be inaccurate. The Lego set was in a box and not fully constructed at the time of the search, as pictured below,” they wrote.

A lawyer representing Morss didn’t respond to a request for comment by press time.

Surveillance footage showed Morss on Jan. 6 pushing his way toward a line of officers guarding the Lower West Terrace doors of the Capitol, prosecutors say. He then allegedly grabbed an officer’s shield and passed it back to other members of the crowd.

Morss and other breachers ultimately entered the Capitol through a broken window, footage showed.

Prosecutors allege that he would pose a danger to the community and present a flight risk if released.

A hearing on whether to allow Morss’s release is scheduled for July 13.