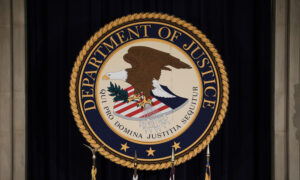 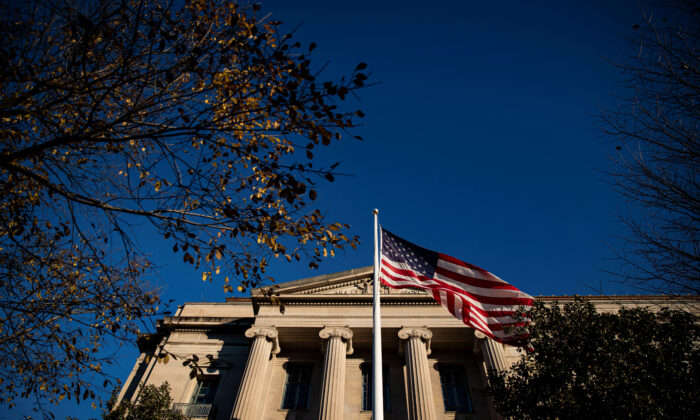 An American flag waves outside the U.S. Department of Justice Building in Washington on Dec. 15, 2020. (Al Drago/Reuters)
Judiciary

The Department of Justice (DOJ) released a portion of a legal memorandum this week that assisted then-Attorney General William Barr in his decision on whether to prosecute then-President Donald Trump for obstruction of justice during the Robert Mueller special counsel investigation.

At issue in this case was whether the DOJ could keep portions of a March 24, 2019, internal memo hidden from the public by using an exemption to the Freedom of Information Act. The federal court ordered that the memo was to be disclosed in full to the public.

The DOJ has since partially appealed U.S. District Judge Amy Berman Jackson’s decision, but also released the first page and one section of the disputed legal memo. The department said it would continue its efforts to keep the remainder of the document redacted.

The newly unredacted part of the memo shows how top officials at the department’s Office of Legal Counsel made the argument in favor of Barr reaching a public determination on whether to prosecute Trump for obstruction of justice. The official had determined that then-special counsel Robert Mueller hadn’t reached the conclusion in his report and recommended that Barr take on the endeavor.

Part of section one of the memo stated: “Although the Special Counsel recognized the unfairness of levying an accusation against the President without bringing criminal charges, the Report’s failure to take a position on the matters described therein might be read to imply such an accusation if the confidential report were released to the public.”

“After carefully reviewing the facts and legal theories outlined in the report, and in consultation with the Office of Legal Counsel and other department lawyers, the deputy attorney general and I concluded that the evidence developed by the special counsel is not sufficient to establish that the president committed an obstruction-of-justice offense,” Barr said at a press conference.

The release of the memo came in a case brought by the nonprofit organization Citizens for Responsibility and Ethics in Washington (CREW), which had filed a public records request for the information that Barr had reviewed prior to his public announcement concerning special counsel Robert Mueller’s report, in which he dismissed allegations that the Trump campaign had colluded with Russia in the 2016 presidential election. The nonprofit made the request after Barr announced his findings to Congress on April 18.

CREW was seeking the documents used in Barr’s consultations with department lawyers regarding the decision not to charge Trump with obstruction of justice.

DOJ attorneys argued that the March 24, 2019, memo was “advice and analysis” provided prior to Barr making a decision on the question of whether to prosecute Trump. However, Jackson rejected the DOJ’s arguments, saying that, at the time Barr received the memo, the writers and he had a shared understanding over the decision not to prosecute Trump. Therefore, the document wasn’t “predecisional,” according to the judge.

She also concluded that the memo represented “strategic, as opposed to legal, advice” and would fall outside the scope of the exemption.

The DOJ is disputing Jackson’s conclusion about the document, arguing that the judge reached the conclusion because the department had “incorrectly described the nature of the decisional process” that Barr was engaged in when he referred to the memo in their filings. They added that the imprecision in its description of the decisional process is what led the court to determine that the memo shouldn’t be protected by the deliberative process privilege.