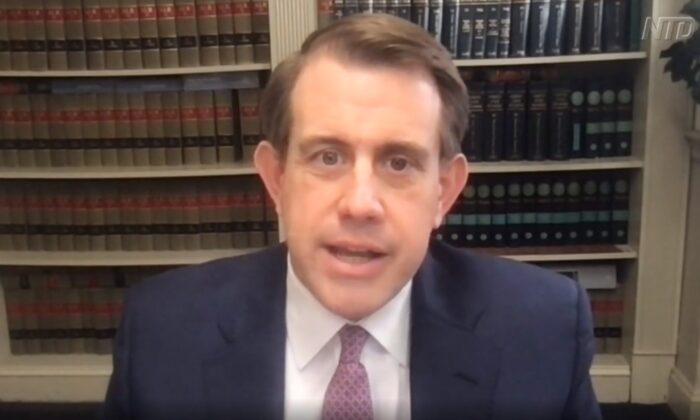 An attorney for President Donald Trump’s campaign said in a Dec. 28 interview that he believes the Department of Justice (DOJ) applies a double standard and should be depoliticized.

Jesse Binnall told Just the News AM that when Republicans are in charge, they “try to bend over backwards” to avoid appearing as if they are politicizing the DOJ, “including sometimes not investigating or not fully investigating the crimes of the left.”

He said that, under the guise of maintaining political neutrality at the DOJ, allegations of corruption and other forms of illegal activity by those on the left are “swept under the rug.”

“It’s turning a blind eye to fraud and corruption, because you’re afraid of what the media will say about that,” Binnall said. He blamed former Attorney General William Barr for not doing enough to depoliticize the department and ensure an evenhanded approach to investigations.

At the same time, when Democrats are in control, the DOJ doesn’t “play by the same rules,” Binnall said, claiming it’s akin to “open season on conservatives and Republicans.”

“I believe the DOJ should be depoliticized,” Binnall said. “I also believe that it was a huge double standard.”

Binnall said the DOJ under Barr took a hands-off approach in investigating claims of voter and election fraud, and expressed hope that Acting Attorney General Jeffrey Rosen “fully investigates the issues of voter fraud we know are out there.”

In a Dec. 22 interview on Epoch Times affiliate NTD, Binnall noted that the courts have largely avoided examining evidence relating to voter and election fraud, with most cases dismissed on technicalities, such as standing.

“It’s really, really unfortunate that courts are trying to find ways to dodge the issue,” Binnall said. “My case in Nevada is an example of that, where we were told: no live witnesses, and you’re limited to only 15 depositions. So, 130,000 instances of voter fraud, and you can only do it with 15 depositions.”

He spoke of other restrictions on the ability of Trump’s legal team to provide evidence.

“Over the Thanksgiving holiday weekend, we were really limited for how we could actually put in our evidence,” he said. “For instance, when we’re able to find evidence of almost 4,000 noncitizens who voted in the election, the court wouldn’t even hear that evidence, the court excluded it completely. And then when it went up to the Supreme Court in Nevada, they gave us two hours to brief our case, to brief all of our issues.

“It’s just completely ridiculous that courts are more interested in being a rubber stamp for this media narrative that there was no voter fraud and ignoring the evidence to the contrary, that there was clear voter fraud, that courts have decided to abdicate their role to be neutral arbiters. That’s really sad,” Binnall said.

Speaking to Just the News AM, Binnall said he hopes the DOJ under Rosen engages with allegations of election-related irregularities in earnest, to “expose the voter fraud that is out there.”

“Something can still be done,” he said.

DOJ officials didn’t immediately respond to a request by The Epoch Times for comment on Binnall’s criticisms.