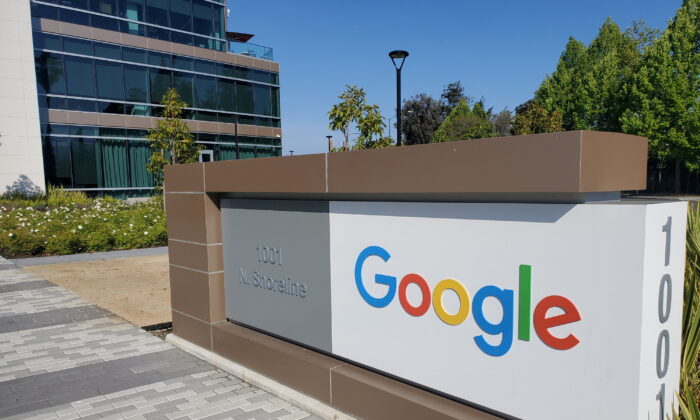 A sign is pictured out of a Google office near the company's headquarters in Mountain View, Calif., on May 8, 2019. (Paresh Dave/Reuters)
By Jack Phillips

The Department of Justice and eight states on Tuesday filed a lawsuit against Alphabet-owned Google, calling for the breakup of the firm’s ad-technology business and alleging it’s engaged in monopolistic practices.

“Google abuses its monopoly power to disadvantage website publishers and advertisers who dare to use competing ad tech products in a search for higher quality, or lower cost, matches,” said the Justice Department in a complaint (pdf) filed in a federal court in Virginia.

“Google has used anticompetitive, exclusionary, and unlawful means to eliminate or severely diminish any threat to its dominance over digital advertising technologies,” the government said in its antitrust complaint on Tuesday.

Monopolies “stifle innovation” and “increase costs for consumers,” said Attorney General Merrick Garland in a news conference announcing the lawsuit. The U.S. government, he said, has suffered as a result of Google’s allegedly monopolistic practices because it has overpaid for advertisements through its networks.

The suit takes aim at Google’s advertising business, which is responsible for some 80 percent of the Mountain View, California-based company’s revenue. In addition to its well-known search, which is free, Google makes revenue through its interlocking ad tech businesses, which connect advertisers with newspapers, websites, and other firms looking to host them.

But over the years, advertisers and website publishers have complained that Google has not been transparent about where ad dollars go, specifically how much goes to publishers and how much to Google. The tech giant made a series of purchases, including DoubleClick in 2008 and AdMob in 2009, to help make it a dominant player in online advertising.

Google, the Justice Department said, “has corrupted legitimate competition in the ad tech industry by engaging in a systematic campaign to seize control of the wide swath of high-tech tools used by publishers, advertisers, and brokers, to facilitate digital advertising. Having inserted itself into all aspects of the digital advertising marketplace, Google has used anticompetitive, exclusionary, and unlawful means to eliminate or severely diminish any threat to its dominance over digital advertising technologies,” according to the filing.

Further, it claimed that Google first worked to “neutralize or eliminate” other ad tech competitors via acquisitions and then used its “dominance across digital advertising markets to force more publishers and advertisers to use its products while disrupting their ability to use competing products.”

“Whenever Google’s customers and competitors responded with innovation that threatened Google’s stranglehold over any one of these ad tech tools, Google’s anticompetitive response has been swift and effective,” the suit said. “Each time a threat has emerged, Google has used its market power in one or more of these ad tech tools to quash the threat. The result: Google’s plan for durable, industry-wide dominance has succeeded.”

Previously, Google has argued that in the ad technology field, it was competing with Meta’s Facebook, AT&T, and Comcast, among others. Last December, the firm asked a federal court to toss the DOJ’s first antitrust lawsuit, saying it was “deeply flawed” and used “dubious antitrust arguments.”

It argued that its overwhelming market share is thanks to the quality of its search product, adding that its efforts to promote search were entirely legal.

Schmidtlein also said that companies want to partner with Google “because they want to” and not “because they had to.”  The company “had extraordinary success and was doing something incredibly valuable. Competition on the merits is not unlawful,” he added.