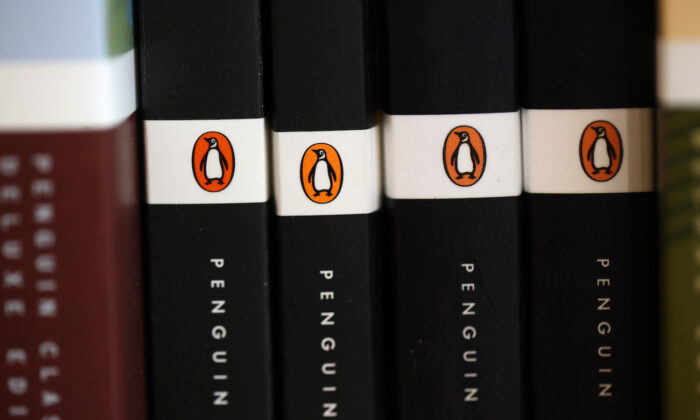 The Penguin logo is visible on the spines of books displayed on a shelf at Book Passage in Corte Madera, Calif., on Nov. 2, 2021. (Justin Sullivan/Getty Images)
Executive Branch

The Department of Justice filed an antitrust lawsuit on Nov. 2 to block a merger of two major book publishing companies.

Penguin Random House, the largest book publisher in the world, is seeking to acquire its competitor, Simon & Schuster, for $2.18 billion. The sale was announced in November 2020.

The DOJ said the acquisition would enable Penguin Random House “to exert outsized influence over which books are published in the United States and how much authors are paid for their work.”

The DOJ seeks to “ensure fair competition in the U.S. publishing industry” and its complaint (pdf), filed in the U.S. District Court for the District of Columbia, reflects the DOJ’s “commitment to pursuing economic opportunity and fairness through antitrust enforcement,” Attorney General Merrick Garland said in a statement.

Five publishers control the publishing industry in the United States. The other three publishers are HarperCollins, Hachette Book Group, and Macmillan.

“If the world’s largest book publisher is permitted to acquire one of its biggest rivals, it will have unprecedented control over this important industry,” the attorney general said.

The complaint alleges the proposed merger would eliminate competition between publishers, which would mean lower advances for authors, fewer books, and less variety for consumers.

“Simply put, if Penguin Random House acquires Simon & Schuster, the two publishers will stop competing against each other. As a result, authors will be paid less for their work. Authors who are paid less write less, which, in turn, means that the quantity and variety of books diminishes too,” the DOJ said.

It also alleges that the merger would give Penguin Random House control of close to half the market for acquiring publishing rights to books and thereby leave “hundreds of individual authors with fewer options and less leverage.”

Penguin Random House and Simon & Schuster said in a statement they would fight the lawsuit.

“This is a pro-consumer, pro-author and pro-bookseller transaction,” the statement said. “Blocking the transaction would harm the very authors D.O.J. purports to protect. We will fight this lawsuit vigorously and look forward to [Penguin Random House] serving as the steward for this storied publishing house in the years to come.”