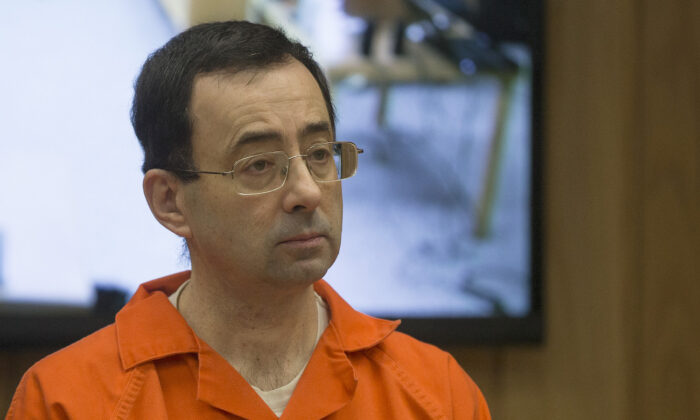 The U.S. Justice Department (DOJ) on Thursday announced that it will adhere to a previous decision not to charge two former FBI agents who mishandled an investigation into convicted sex offender Larry Nassar, the former doctor of the USA Gymnastics national team.

“This decision comes after multiple reviews and analyses of evidence gathered in the investigation of the former agents, and reflects the recommendation of experienced prosecutors,” the DOJ statement reads.

After allegations of Nassar’s abuse were first reported to the FBI Indianapolis Field Office by the president of USA Gymnastics in 2015, local field agents failed to respond “with the utmost seriousness and urgency that the allegations deserved and required,” a 2021 report by the DOJ’s Office of Inspector General (OIG) found.

Further, the report found that two FBI officials lied during their interviews to cover up or minimize their errors. One of the agents also made a false statement to the media in 2017 and 2018 about how his office handled the Nassar case.

That agent also violated the FBI’s conflict of interest policy by discussing a possible job with the U.S. Olympic Committee while he was involved with the Nassar investigation.

The OIG noted the seriousness of the former agents lying during the investigation into their conduct in the years after the events but said there wasn’t enough to bring a federal criminal case.

“We will continue to learn from what occurred in this matter, and undertake efforts to keep victims at the center of our work and to ensure that they are heard, respected, and treated fairly throughout the process, as they deserve,” the DOJ statement reads.

“To that end, the department has continued to assess gaps in the law to protect the most vulnerable among us from exploitation. Addressing those gaps could help prevent events like this from taking place in the future and hold perpetrators accountable. We stand ready to collaborate with Congress to do so.”

Altogether, Nassar was sentenced to up to 175 years in prison for separate charges, including possessing child sex abuse material and for sexual abuse. He was named in hundreds of lawsuits by female athletes who said Nassar abused them when he worked for Michigan State and Indiana-based USA Gymnastics.