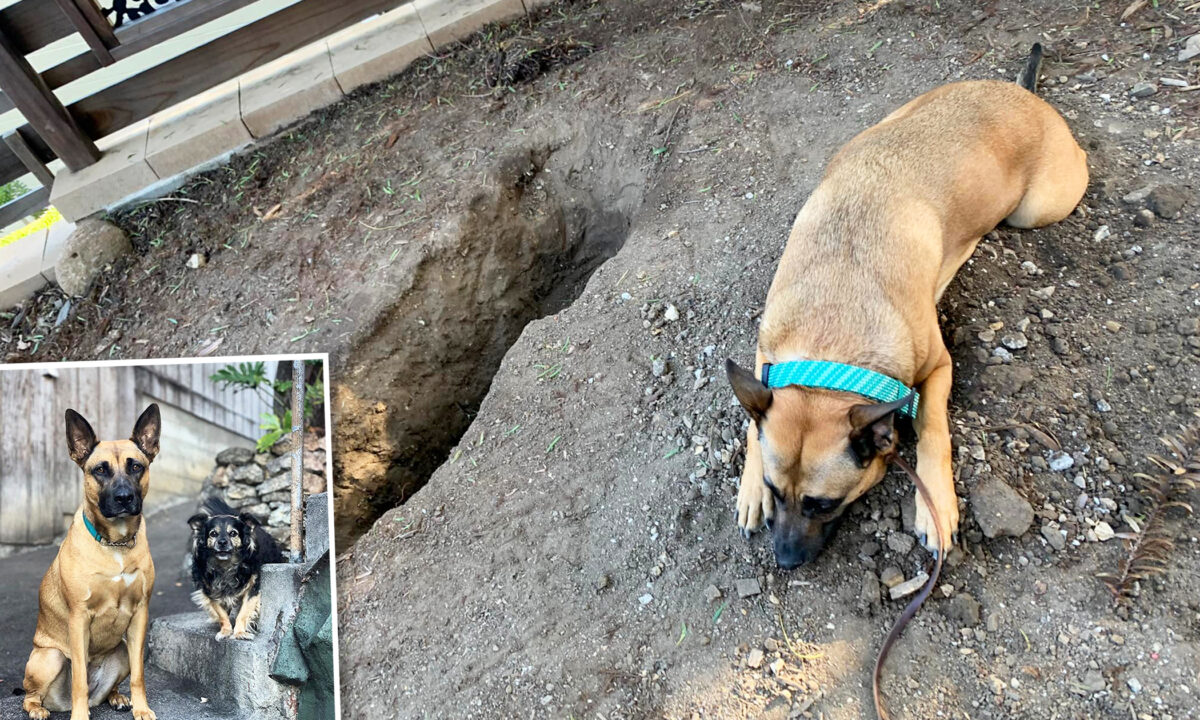 A grieving dog got the chance to say goodbye to her best friend, a senior Chihuahua mix who died from terminal illnesses. The moving moment was caught on camera and immortalized in a series of photos that has tugged at the heartstrings of thousands.

Pepper was already a 9-year-old senior pup when his owner, 31-year-old Tona Gonzales Karlsson, adopted a German shepherd mix, Yari, in September 2017. Despite their odd-couple appearance, the two of them became fast friends.

“Pepper was the sassiest, bossiest dog ever,” Karlsson, a Santa Cruz county jail therapist from Watsonville, California, told The Epoch Times of his personality.

Initially, when Karlsson welcomed Yari into the house, Pepper tried to set boundaries with her. However, Karlsson made sure to take them for pack walks and ensured that she kept a good amount of Pepper’s regular routine going, to ensure they bonded.

“I spent all my time outside of work with them to develop our bond as a trio,” Karlsson said. “I took them to the park together, I would take them places where they could do ‘pack walks’ together.”

Pepper had been a “super-spoiled” only dog for nine years, but seemed to trust Yari pretty quickly, more so than most other dogs he had met. Soon enough, Yari convinced Pepper to play with her, and they became inseparable friends.

Pepper even took on the comic role of “big spoon” for her larger cuddle buddy.

The senior Chihuahua had received his first diagnosis the same year Yari was adopted. An X-ray revealed an enlarged heart and a level 4 heart murmur. He was also at risk of congenital heart failure and was susceptible to infections, which would make him cough. Karlsson worked on treating them with antibiotics and he slowly improved.

Pepper then fell sick in the fall of 2020, when he suffered from vestibular disease. At this time, Yari was his “nurse dog,” making sure Karlsson knew when he needed attention.

“She was so patient and calm with him, and she put up with many times we needed a mellow day,” Karlsson recalled. “For a German shepherd mix, that’s a big ask!”

“She has a lot of energy and is used to a lot of daily activity,” Karlsson added.

Pepper was treated with medicine and antibiotics and recovered.

However, later, a new X-ray revealed that Pepper was dealing with tracheal collapse. It was untreatable as it was primarily behind vital organs—and the most collapsed part of his trachea was behind his enlarged heart.

In the fall of 2021, Pepper had an overnight ER stay—after he ended up having a syncopal event—where he received oxygen. Pepper was prescribed a couple of new medications by his primary veterinarian before Karlsson saw a specialist.

Shortly after this, he was scheduled to see a cardiologist who would do an echocardiogram to look further into his syncopal episode.

By this time, Pepper was dealing with three terminal diagnoses: pulmonary hypertension, collapsing trachea, and congestive heart failure. He was prescribed the human drug Viagra to manage his symptoms, and far outlived his prognosis.

“Pepper was diagnosed in October, and he not only survived but lived with a good quality of life up until the day he passed away,” said Karlsson, “well beyond the 91-day average.”

Pepper stopped eating the day before he died as he didn’t feel well. Karlsson, who had taken a week off work to care for her sickly pup, couldn’t medicate him because he wasn’t eating.

“It worked out to be exactly 14 years since the day he came home; I brought him home April 20, 2008, and he passed away April 20, 2022,” said Karlsson. “Could be a coincidence, but it felt like he was trying to tell me something when he stopped eating, and stopped wanting to walk or do anything.”

Witnessing his condition, Karlsson decided to load him up in her car and take him to her parents’ house.

“He didn’t stick his head out the window like usual, but I could tell he enjoyed the wind in his fur on the way to my parents’ house, which would be his final resting place,” she recalled.

To Karlsson’s amazement, after Pepper was placed on a comfy cushion in her parents’ backyard, as they waited for the veterinarian to arrive for his scheduled euthanasia, Pepper rose up and walked over to his grave under the shade of a pepper tree.

“It felt like he was telling me he was ready, and was trying to comfort me with this small but incredible and seemingly magical gesture,” Karlsson said.

Yari saw Pepper before and after he passed. She nuzzled his body, and after he was placed in the ground on a bed of flowers and herbs from the garden, Yari laid down at the head of his grave.

“I felt relieved that she seemed to understand that he had died, in whatever way a dog can understand,” said Karlsson.

Moved by what she witnessed, Karlsson shared photos of Yari laying by her best friend’s grave with the public Facebook group Dogspotting Society. The post received over 3,000 reactions and hundreds of messages of support and condolence.

Their support humbled Karlsson, as she didn’t really expect such a reaction, and shared that she only posted those pictures because it was meaningful to her.

“Pepper was my whole world, my best friend, my soulmate,” she explained. “He became that for Yari, too, and knowing that people could understand the complex pain and grief me and Yari were going through was so comforting.”

The family held a wake for Pepper to share their stories and memories of him, where they laughed and cried.

While Pepper will never be forgotten, Karlsson and Yari have since opened their hearts to another animal kin, a feral kitten that needed a home.

“She has brought us both so much-needed joy, and laughter on my end,” said Karlsson, who hasn’t cared for such a small animal since she got Pepper 14 years ago. “Yari has loved having a tiny, fascinating new friend in our home.”