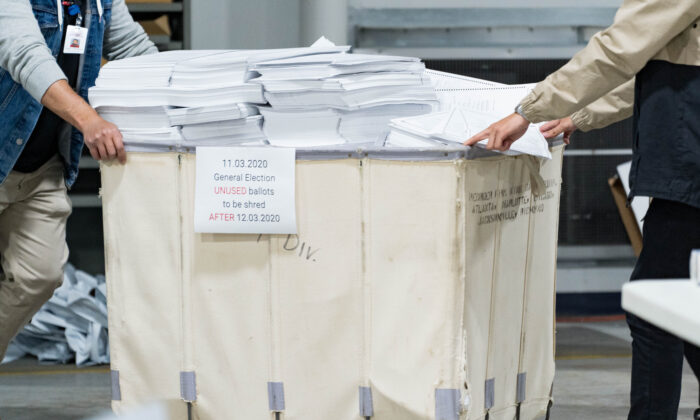 D’Souza told The Epoch Times: “2000 Mules will settle the issue beyond a shadow of a doubt by using two powerful, independent modes of investigation. The evidence is so conclusive, so decisive, that it leaves nothing to argue about.”

D’Souza, who is a contributor to The Epoch Times, said an investigative team used cellphone tracking and video footage to prove that unauthorized intermediaries called “mules” collected thousands of absentee ballots from voters and deposited them in drop boxes for money, which is illegal in all 50 states.

Cellphones emit a unique and identifiable signal or “ping.” Trillions of pings were analyzed by investigators to reconstruct the movements of thousands of mules as they went about their work in the weeks prior to the 2020 presidential election, the documentary claims.

“Who would have ever thought that investigators could look back in time and discover such things?” D’Souza said.

Investigators also sifted through millions of minutes of video surveillance footage and were able to capture on tape numerous mules stuffing absentee ballot drop boxes, D’Souza said. The videos show the mules taking selfies of themselves as proof of services rendered to their employers in order to be paid, he said.

“Not all the drop boxes were under video surveillance, but enough were to provide incontrovertible evidence, much obtained from government entities,” he said. “’2000 Mules’ contains a lot of never-before-seen footage depicting glove-wearing mules moving from county to county delivering absentee ballots to drop boxes, often in the dead of night.”

Much of the film focuses on the state of Georgia, where, according to True the Vote—the organization that conducted the investigations—242 metro Atlanta mules made 5,668 stops at drop boxes during elections in late 2020.

Similar illegal activities were found in Arizona, Wisconsin, Pennsylvania, Texas, and Michigan, according to the group. True the Vote estimates that at least 4.8 million votes were trafficked nationally. The studies were funded by the human rights organization First Freedoms.

Election fraud has been committed by both parties throughout U.S. history, and therefore “cannot be considered abnormal,” D’Souza said. “The Democrats have a particular history of committing specialized election fraud in urban areas.

“The COVID-19 pandemic created an opportunity to do fraud on a scale not imagined before. The avalanche of absentee ballots sent out and the drop boxes presented much greater opportunity.”

D’Souza said he’s worried about the Democrats’ push to centralize how elections are conducted at both the state and national levels.

“A united Republican opposition is the only thing thwarting Biden, Pelosi, and the Democrats from enacting their plans,” he said. “Across America, the Democrats are trying to get rid of election security measures imposed by the states. They want to legalize fraud.”

The infusion of private money to help pay for elections is something D’Souza finds “very disturbing.”

“The money is largely coming from nonprofits funded by billionaires like Zuckerberg. They pose as politically neutral, which they are not.

“Localities were pressured by the nonprofits to have things like drop boxes as a condition for receiving millions of dollars in grant funding.”

D’Souza said that in November 2020, nonprofits paid for programs and advertising that actively encouraged “certain people to come out and vote.”

According to the Zuckerberg-funded Center for Tech and Civic Life, the money was given to help municipalities cope with public health challenges presented by the pandemic.

“Through the movie ‘2000 Mules,’ we are taking on the ultimate taboo in American politics today—saying that the 2020 election was stolen by systematic, organized fraud committed by the Democrats and the left,” D’Souza told The Epoch Times.

Mindful of the power of cancel culture, D’Souza said great care has been taken to release the film on what he calls “un-cancellable platforms.”

“It’s hard to believe we have reached that point in America, but alas, we have,” he said.

“While I was a writer or a figure in a think-tank, I wasn’t bothered much. It was when I began to reach a wider audience that I became a political target.”

When asked why he’s willing to subject himself to possible cancellation, D’Souza said, “I am defending the system which made it possible for an immigrant from India, a boy at the bottom, to make my way up—a system that makes this kind of upward economic and social mobility possible.”

D’Souza has produced numerous documentaries, three of which are ranked in the top 10 highest-grossing political documentaries of all time.