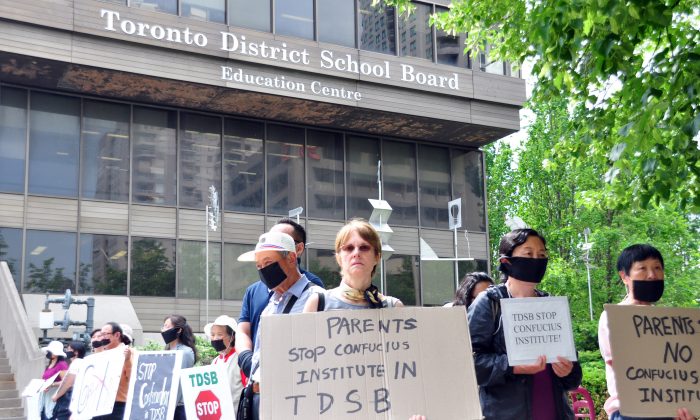 A Canadian-made documentary that shines a light on one of China’s largest soft-power initiatives is starting to pick up awards as it makes its rounds on the film festival circuit.

Filmmaker Doris Liu, a Chinese-Canadian journalist based in Toronto, got interested in Confucius Institutes when she heard the story of Sonia Zhao, who defected to Canada and went on to expose the unsavoury behind-the-scenes practices of what China bills as a Chinese language and culture program.

I understand that most CI host universities or school boards are not aware of how Hanban hires CI teachers or what requirements Hanban enforces on them.
— Doris Liu, filmmaker

Zhao came to Canada to teach at McMaster University’s Confucius Institute in 2011. Liu’s documentary “In the Name of Confucius” tells Zhao’s story amid the backdrop of a public showdown over the Toronto District School Board‘s controversial decision to bring a Confucius Institute (CI) to Canada’s largest school board.

China has made deals to install CIs in hundreds of educational institutions around the world by giving those institutions the ability to offer Chinese language and culture classes using teachers and curricula selected and paid for by the Beijing regime.

CIs are commonly acknowledged by intelligence agencies as tools to extend the Chinese Communist Party’s (CCP) soft power. According to Michel Juneau-Katsuya, a former senior manager with the Canadian Security Intelligence Agency, CIs are part of a larger network of organizations used by the CCP to advance its influence abroad.

The organizations within this network “all use soft power, and they are clearly identified by Western [counter-intelligence] agencies as agencies specifically working for spying on the Western world,” Juneau-Katsuya said.

Zhao, who had majored in teaching Chinese to non-native speakers, originally had deemed a teaching opportunity with the CIs a dream job, as it was in line with her career and it would give her a chance to teach abroad.  In China, Zhao had witnessed her mother, who practices Falun Gong, be detained by police for her belief in the meditation practice and its tenet of truthfulness, compassion, and tolerance.

Zhao also practiced Falun Gong and frequently worried she could face persecution, as hundreds of thousands of others have since the CCP launched its anti-Falun Gong campaign in 1999. Falun Gong prisoners of conscience are believed to be a primary source of organs used in China’s massive for-profit transplantation industry.

The documentary captures a moment when Zhao, played by Miss World Canada Anastasia Lin, had to sign a contract promising not to do anything that the communist regime doesn’t approve of—including practicing of Falun Gong. Refusing to sign could have seen her face immediate imprisonment. Signing meant betraying her conscience.

Zhao’s eventual defection marked the beginning of the end for McMaster’s CI, which closed in 2013 after the university couldn’t convince Hanban, the Chinese governmental agency behind the CIs, to remove clauses that violate human rights in its hiring practices for teachers who would end up working in Canada.

“In the Name of Confucius” follows Zhao as she joins public protests over the Toronto District School Board’s secretive deal to bring CIs to Toronto classrooms.

The film captures the period when the TDSB held spirited public hearings regarding the deal. Then-chair Chris Bolton, the man responsible for pushing the deal, suddenly resigned in a surprise move in June 2014, days after the initial round of public and media scrutiny over the controversial institute coming to Toronto schools.

There are some tense moments, including the time Bolton asks a concerned parent to leave his office. Bolton had worked to bring the CI to the TDSB but kept it low-key—to the point that many of the trustees said later that they had been kept in the dark and only came to know about the concerns surrounding the institutes after widespread protests by parents in the community.

Liu says the biggest challenge she encountered while making the documentary was getting access to administrators of institutions that host CIs.

“Once I started to ask them questions about the controversies surrounding CIs, and in particular [Zhao’s] case, they didn’t want to talk. I was worried about the lack of balance of opinions from the pro-CI side,” she said.

Documents obtained by Epoch Times from the TDSB under the Freedom of Information Act include one from Hanban in Chinese that provides guidelines on how “those dispatched by the country to work and study abroad” (including CI teachers) are to behave when outside China. It says that when it comes to the “June 4 Tiananmen incident,” Falun Gong, Uighurs, Tibetans, human rights, and Taiwan, the individual’s approach should be consistent with the position of the Chinese regime.

“One shall be cautious with his/her words and actions and be accountable to the country, the people, and him/herself,” the document reads.

It also says that the individual should not attend any activities organized by religious groups or community groups, “including free events and activities within the church,” and avoid joining any organizations. Travel documentation is to be kept by the team leader, and when going out, “individuals shall have companions and return on time.”

On the bottom right of the document a handwritten note in English says, “Translation — Forbids speaking against [illegible]—barred to take part in religious activity.”

“I understand that most CI host universities or school boards are not aware of how Hanban hires CI teachers or what requirements Hanban enforces on them,” Liu said.

In 2013, the Canadian Association of University Teachers (CAUT) urged universities and colleges to cut their ties with CIs, saying they are “subsidized and supervised by the authoritarian government of China.”

When Epoch Times approached some of the educational institutions hosting with CIs after CAUT had issued its statement, many of them refused to comment or did not respond, including the University of Windsor, the New Brunswick Department of Education, the Edmonton Public School Board, Brock University, Coquitlam School District, University of Saskatchewan, the British Columbia Institute of Technology (BCIT), and Seneca College.

In October 2014, after many discussions, 20 out of the 22 TDSB trustees voted to not host a CI in Toronto’s school system.

Last week, “In the Name of Confucius” won the Humanitarian Award of Distinction from the Accolade Global Film Competition. It also recently won awards of excellence from the Impact DOCS Award, among several other awards.  The film will have its world premiere at the Belleville Downtown DocFest International Documentary Film Festival in Belleville, Ont., on March 3.