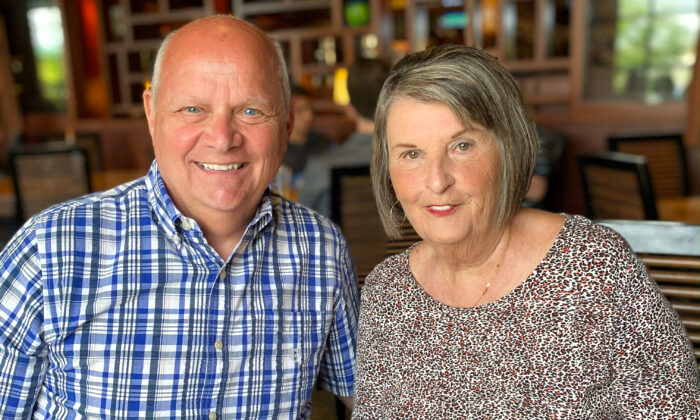 Claudia Pisano is fighting to try to save the life of her husband of 51 years, Daniel, by asking a judge to order Mayo Clinic to allow treatment with ivermectin. The Florida hospital's protocols for COVID-19 have failed and Daniel, who is unconscious and on a ventilator, has a 0-5 percent chance of survival, hospitals officials have told the family. (Courtesy of Chris Pisano)
US News

The family of a dying patient at a Florida hospital has filed an emergency appeal they hope will overturn a lower court’s decision and force Mayo Clinic to give their preferred treatment for COVID-19.

Judge Marianne Aho of Florida’s Fourth Judicial Circuit ruled against the family during an emergency hearing on Dec. 30.

In her order, Aho wrote that attorneys for the family of Daniel Pisano “have not established that the rights of privacy, self-determination, or any other right, entitles them to” the injunction they were seeking.

But attorneys for the family insist the Florida Patient’s Bill of Rights gives Daniel Pisano’s family the right to choose his treatment.

The patient’s son and his wife of 51 years have power of attorney giving them the legal right to make medical decisions for him while he is unconscious. And that includes the right to choose his treatment, argue their attorneys, Nick Whitney, of Jacksonville, and Jeff Childers, of Gainesville.

But they’re running out of time to provide life-saving treatment, according to the family’s trusted doctor, who’s reviewing Pisano’s chart through an online portal.

The Pisano family’s attorneys filed an emergency appeal in Florida’s First District Court of Appeal late Jan. 9 that seeks to overturn Judge Aho’s decision. At the time of publication, a hearing had not been set, and Mayo Clinic had not filed a response to the lawsuit.

Mayo Clinic has not responded to requests from The Epoch Times for comment on the case and the organization’s lawyers have requested that their communications in the case be sealed.

The use of ventilators seem to push patients on to a path of death, says Dr. Eduardo Balbona, the independent Jacksonville doctor helping the Pisano family.

“In New York, over 65 ICU ventilated patients [had] a mortality of 97 percent,” he testified before Judge Aho.

“I know in [Ascension’s] St. Vincent’s [Southside Hospital in Jacksvonille, in the] ICU, Delta last summer had a mortality of 93 percent. It’s very hard to get those kind of mortality levels from the virus itself. I believe the treatment we’re using is doing harm.”

Balbona was trained at the National Naval Medical Center and was an official doctor providing care for members Congress at the U.S. Capitol. Because he is not officially associated with Mayo Clinic, he cannot provide care to Pisano there.

His hope is that a judge will order Mayo Clinic doctors to provide the treatment he’s prescribed, allowing Pisano to be weaned from the ventilator and discharged. Only then would the Pisano family be free to follow his directives. His experience treating seriously ill patients leads him to believe Pisano could improve quickly, once started on the protocol he has recommended.

Mayo Clinic has refused to treat Pisano with the medications and supplements the family believes are his only chance to survive.

The organization’s attorneys submitted an affidavit from Dr. Pablo Moreno Franco that said, ‘“In general, it is difficult to know what the side effects would be for the medication [ivermectin] if administered at the requested level.”

More than 90 peer-reviewed studies have been published demonstrating the drug’s efficacy at treating patients suffering from COVID-19.

Since sharing his opinions about the case in interviews with news media, Balbona’s office has been flooded with calls from people angry that he wants to prescribe “horse medication.”

“I only want to do the right thing by my patients,” he told The Epoch Times. “I’m shocked others feel they must stop me. In my 30 years of practice, this has never happened.”

Patients of Balbona told The Epoch Times they’re sure he saved their lives using the protocol he has recommended for Pisano. They credited the drug ivermectin as the key to their recovery.

Daniel Pisano, 70, sought treatment at Mayo Clinic’s Jacksonville facility two weeks before Christmas, just days after moving to Florida with his wife to be close to their only two grandchildren.

As part of Mayo Clinic’s protocol, doctors there administered the drug Remdesivir, “which in turn damaged Dan’s kidneys, a known side-effect,” according to the family’s lawsuit.

Since Dec. 22, Pisano has been on a ventilator in a medically induced coma in the intensive care unit. The hospital has “estimated his chances of survival at less than 5 percent,” court records show.

After consulting with Balbona, Pisano’s wife and their son begged Mayo Clinic officials to try a protocol used by independent doctors around the country to treat patients with COVID-19.

After reviewing Pisano’s history, current condition, and prognosis, Balbona suggested the regimen that uses FDA-approved medications, such as the corticosteroid dexamethasone, fluvoxamine, antibiotic doxycycline, aspirin, anti-coagulant Lovenox, and ivermectin, an anti-parasitic drug that also is widely used to combat viruses for 40 years.

He has treated many seriously ill patients battling COVID-19 using the same protocol and they have survived. He testified in the hearing before Judge Aho that Pisano would have a 50 percent chance of survival if given the treatment soon.

For now, Pisano is far too sick to leave the hospital. Court records indicate that he currently is receiving no treatment, other than mechanical ventilation.

And that’s what’s doing him the most harm, Balbona testified in the family’s first emergency hearing. If they keep treating him the same way, there’s a high likelihood he will die, he added.

Balbona says he can’t understand why Mayo Clinic doctors aren’t treating Pisano with drugs that have been shown to work.

“He is not on dexamethasone; he should be,” Balbona testified. “Fluvoxamine has been shown to decrease mortality by about 90 percent. Again, he should be on fluvoxamine. The vitamin C, vitamin D, and zinc are ionophores that, again, stop the inflammatory process. There’s no reason he shouldn’t be on these medicines. They’re very safe. They’re not controversial.”

Once administered, Pisano’s chances of survival would “dramatically increase,” Balbona testified. “And I would say that they’ll increase in 72 hours in most people. In three to four days, you’ll see a dramatic difference.”

The Mayo Clinic is a nonprofit American academic medical center, employing more than 4,500 physicians and scientists and 58,400 other staff members across campuses in Florida, Minnesota, and Arizona.