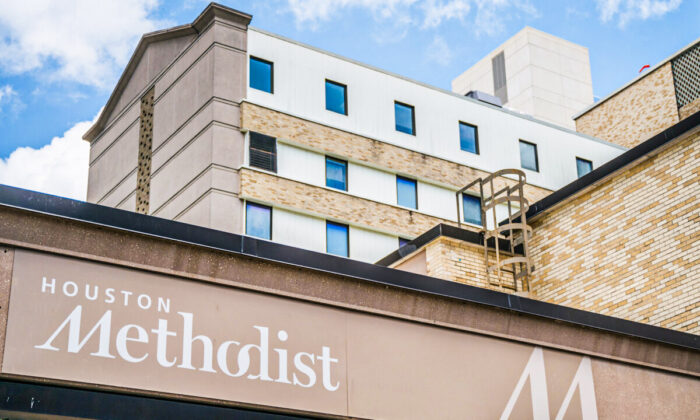 The exterior of the Houston Methodist Hospital is seen in Houston, Texas on June 9, 2021. (Brandon Bell/Getty Images)
US News

A Texas doctor who had her privileges revoked by Houston Methodist hospital last year due to her support of ivermectin and opposition to vaccine mandates sued the hospital on Jan. 17.

“Two months ago in November Houston Methodist launched me into the public spotlight by telling the world that they were suspending my privileges for supposedly spreading dangerous misinformation about COVID. The Houston Chronicle joined in in that effort. Since then I’ve had a lot of people comment publicly that I should lose my license,” Bowden said outside her clinic in Houston on Monday.

According to the lawsuit, Bowden embarked on a quest to obtain the records from Houston Methodist after the hospital accused her of “spreading dangerous misinformation which is not based in science” in a series of tweets in November last year.

“Dr. Mary Bowden, who recently joined the medical staff at Houston Methodist Hospital, is using her social media accounts to express her personal and political opinions about the COVID-19 vaccine and treatments,” one of the tweets said.

One day prior to the hospital’s tweets, Bowden shared a link to a meta-analysis of studies on the effectiveness of ivermectin as a treatment and prophylaxis for COVID-19.

“Ivermectin might not be as deadly as everyone said it was. Speak up!” Bowden wrote.

Two days earlier, she wrote in another tweet that “vaccine mandates are wrong.”

After the hospital provided “unconvincing explanations” for why it targeted Bowden, she decided to “follow the money,” the lawsuit states. Under Texas law, non-profit corporations like the one which controls Houston Methodist must make their records available upon request from the public.

Flanked by staff from her clinic on Monday, Bowden spoke of her arduous journey to obtain a medical license and how it has taught her to not blindly trust pharmaceutical companies and to view new treatments and vaccines through a critical lens.

Bowden highlighted that her clinic has no financial ties to the government, hospitals, pharmaceutical corporations, or insurance companies.

“I do not contract with insurance companies. I don’t contract with the government. I don’t take Medicare. I have no financial ties with hospitals,” Bowden said. “The only people I work for are my patients and I treat them the way I would want to be treated.”

Bowden’s attorney, Steven Mitby, said the doctor is not pursuing the lawsuit for financial gain.

“She is not seeking a penny for any of this,” Mitby said. “She’s simply asking for transparency and following the law.”

Bowden sought the information from the hospital prior to filing the lawsuit but did not receive a response, Mitby said.

In a letter dated November 30, 2021, Bowden requested a series of records from Houston Methodist, including how much money the hospital made from its COVID-19 vaccination program and from treating COVID-19 patients. The doctor also requested financial records pertaining to any financial payments from pharmaceutical companies, non-profit tax returns, and the bonuses the hospital paid to employees.