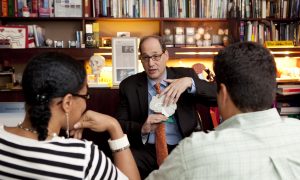 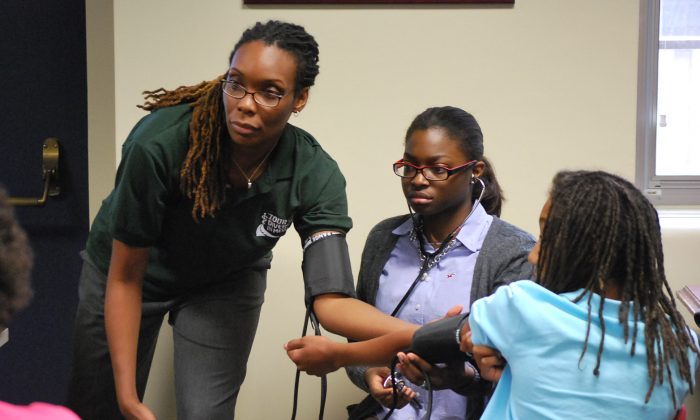 Renée Volny, OB/GYN, shows students how to read a blood pressure meter at the Tour for Diversity in Medicine at the Georgetown University School of Medicine, Sept. 28. (Ron Dory/Epoch Times)
News

WASHINGTON—Doctors met minority high school students to invite them to consider a career in medicine.

Derrick Jones, a sophomore at Ballou Senior High School, said that he was grateful for the support of the volunteer doctors. He said they were committed to helping him get to where he wants to go in life. Jones spoke at the final stop of the Tour for Diversity in Medicine at Georgetown University School of Medicine on Sept. 28.

Kameron Leigh Matthews, MD, JD, co-director of the Tour for Diversity, and medical director of the Erie Division Street Health Center in Chicago, said it was speaking with patients when she volunteered at a hospital before medical school that in part inspired her to pursue a career in medicine .

Matthews said she recognized that many young people that are minorities or come from disadvantaged backgrounds often miss the exposure to medical professionals and the support systems that she had. She started the tour with her best friend, Alden Landry, an emergency medical physician at Beth Israel Deaconess Medical Center in Boston, Mass.

In a workshop with the doctors, students learned about physical examinations. They took each other’s blood pressure and administered vision exams.

In the Teaching Healthy Lifestyles workshop, students looked at a typical diet of a high school athlete, examining his caloric intake.

“We definitely believe that starting early, getting students exposed to medical and biomedical and allied health fields early does tremendous good … we are happy to be asked to be a partner,” said Benjamin R. Walker of Georgetown University Medical Center.

Walker is a senior facilitator of the Georgetown Experimental Medical Studies (GEMS) Program. The 35-year old GEMS program prepares minority and disadvantaged students to study medicine. Walker commended the doctors who volunteered for the tour.

Dr. Thomas Cudjoe, a second year internal medicine resident at Howard University Hospital, said the tour is an organized way that he is able to give back.

“I’ve had mentors that provided personal and professional guidance. I think that mentors are important for people interested in medicine,” said Cudjoe.

Cudjoe said that he gives students his cell phone number and e-mail address.

The timing of the tour coincides with major changes in health care. With implementation of the Affordable Care Act (ACA), nationwide physician shortages have been accelerated, according to AAMC, or Association of American Medical Colleges.

Because of the predicted shortage, AAMC has called for medical schools to increase enrollment by 30 percent. Black and Latino people made up 15 percent of all U.S. medical school applicants in 2011, according to AAMC.

“I think that we were looking at physician shortage before the ACA passed… We know that 10,000 people per day are going to turn 65 that is really what is driving the shortages … What the ACA does is accelerate that shortage because it takes people that maybe would not have health insurance for another ten years and puts them on to the ranks of the insured,” said AAMC Chief Publicity Officer Dr. Atul Grover, in a CSPAN interview.

In the District, of the 1,354 primary care physicians that responded to a Department of Health survey, 453 physicians identified themselves as primary care doctors that spend more than 20 hours per week treating patients.

The Georgetown School of Medicine stop was the tour’s only program for high school students. The Aetna Foundation sponsored the tour.