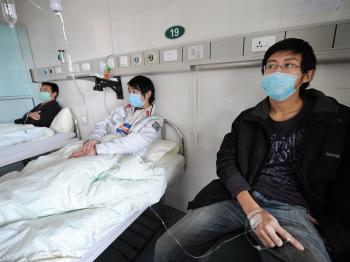 Chinese swine flu patients undergo treatment at a hospital in Hefei in eastern China's Anhui province on Nov 25. The number of infected patients is so high in China that some doctors are telling patients to stay home in quarantine. (STR/AFP/Getty Images)
China

A doctor in Yulin City, Southern China said four or five H1N1 patients die in his hospital every day.
“Every hospital has deaths,” he said. “We have deaths in the morning, the afternoon, and at night.”

When a reporter asked the Yulin City doctor about the victims’ details, such as names, ages, and occupations, the doctor was extremely cautious. "I dare not tell you any specific information. Victims are both young and old,” he said.

The Chinese Communist Party is covering up the extent of H1N1 in the country, according to reports.
Doctors throughout many of China’s hospitals have received notices to not diagnose H1N1, according to recent research conducted by New Tang Dynasty Television (NTDTV).

Instead, doctors have been told to diagnose patients with “seasonal flu” or “pneumonia,” with only the severely ill patients selected to undertake an H1N1 confirmation test.

“Now, we don’t report [H1N1], we just say that it is flu,” said one doctor on condition of anonymity. “The government does not care … There are plenty of regulations—if 10 people die, you cannot report all 10, you can only report one. Now, there are only lies.”

A doctor from Eastern China’s Shandong Province said that about 40 patients with H1N1 symptoms have been treated daily since September in his clinic, but the clinic reports zero.

Fever Patients Sent Home, Too Many to Test

Patients with fever are being told by Yulin City’s Center for Disease Control (CDC) to stay home in quarantine, say doctors.

“We tested patients at first, but now there are too many. The CDC no longer tests the samples we send them,” said a doctor at the fever clinic of Yulin City’s First People's Hospital. He said 90 percent of fever patients probably have H1N1.

“We don’t test patients because even the patients who test positive can only be quarantined at home and take common cold medicine,” the doctor said. “There are too many patients. Now level-two hospitals and above are all designated as H1N1 hospitals.”

An official at the Yulin City, Guangxi Province, CDC immediately hung up the phone when an Epoch Times reporter was introduced.

While doctors are saying that many people have died from H1N1, no official Chinese media information about the high number of deaths was found.

According to Guangxi News, the Guangxi Health Department reported two deaths in 14 cities throughout Guangxi Province for the week of December 14-20.

Regional health departments identify severe flu cases if patients keep having fever of 101.3 to 102.2 degrees Fahrenheit or higher for three consecutive days that cannot be lowered with common fever medicine and have other symptoms, such as severe cough, chest pain, mental confusion, vomiting, or diarrhea.

A Yulin citizen said almost all elementary schools, high schools, and colleges have again stopped classes. “The epidemic has started again,” she said. “Most schools stopped classes for two weeks. Students dare not go to school, and no one dares to go out at night. The streets are quiet.”

A woman said her son studies at Donghuan Elementary School in Yulin City.

A teacher at an English School in Yulin City said the school also closed for two weeks after three students and a teacher tested positive for H1N1.

”They found a student with fever and then called his parents to ask that the child take the H1N1 test,” the teacher said. “Afterwards, the CDC sent people to the school to test the students. They sent students to the H1N1 hospital when they tested positive.”

Disease control experts in Guangxi said the H1N1 epidemic is intensifying, with the coldest months yet to come. January and February are the most wintery months in Guangxi. Many people travel during the New Year and the Chinese New Year, a key period for preventing and controlling the H1N1 epidemic.