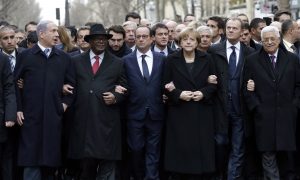 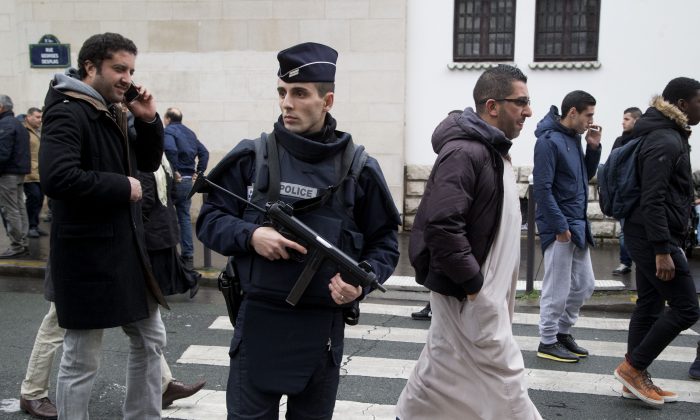 File - In this Friday, Jan. 9, 2015 file photo, a French police officer stands guard outside the Grand Mosque as people arrive for Friday prayers, in Paris, France. Amid violence like the attack in Paris on a satirical newspaper over its depictions of the Prophet Muhammad, there’s been increasing discussions among Muslims who say their community must re-examine their faith to modernize its interpretations and sideline extremists. There is a growing debate within Islam about whether and how to reject a radical minority that some fear is dragging them into conflict and wrecking the faith. (AP Photo/Michel Euler, File)
Europe

Do Muslim ‘No-Go Zones’ Even Exist?

Fox News may be sued by the city of Paris after the channel covered purported “no-go zones” for non-Muslims.

There’s been longstanding rumors that major cities in Europe, including Paris, have the so-called zones where entire towns and cities have been placed under local rule of law, or even Islamic Sharia law.

After Paris: Effort Should Be Spent on Understanding Faith Communities, Not Hatred

But as CNN notes, there’s a slim chance the lawsuit would succeed, and if the city goes through with it, the suit would be mostly symbolic.

Fox News has since apologized for the remarks. The network quoted terrorism expert Steve Emerson as saying, “Well these no go zones exist not only in France, but they exist throughout Europe. They’re sort of amorphous, they’re not contiguous necessarily, but they’re sort of safe havens and they’re places where the governments like France, Britain, Sweden, Germany don’t exercise any sovereignty.

“So you basically have zones where Shariah courts were set up, where Muslim density is very intense, where the police don’t go in, and where it’s basically a separate country almost, a country within a country.”

The problem with Emerson’s assertion is that they don’t really exist and are based on rumors. It prompted backlash from a number of European officials, including U.K. Prime Minister David Cameron.

There’s been longstanding rumors that major cities in Europe, including Paris, have the so-called zones where entire towns and cities have been placed under local rule of law, or even Islamic Sharia law.

“When I heard this, frankly, I choked on my porridge and I thought it must be April Fools Day,” the prime minister said.

Emerson later issued a statement, recanting his claims about “no-go zones” in Birmingham, England. “I have clearly made a terrible error for which I am deeply sorry. My comments about Birmingham were totally in error. And I am issuing this apology and correction for having made this comment about the beautiful city of Birmingham. I do not intend to justify or mitigate my mistake by stating that I had relied on other sources because I should have been much more careful,” he said.

In 2006, Middle Easter blogger Daniel Pipes wrote: “I had an opportunity today to travel at length to several banlieues (suburbs) around Paris, including Sarcelles, Val d’Oise, and Seine Saint Denis. This comes on the heels of having visited over the years the predominantly immigrant (and Muslim) areas of Brussels, Copenhagen, Malmo, Berlin, and Athens.

“A couple of observations: For a visiting American, these areas are very mild, even dull. We who know the Bronx and Detroit expect urban hell in Europe too, but there things look fine. The immigrant areas are hardly beautiful, but buildings are intact, greenery abounds, and order prevails.”

He added there’s no “full-fledged no-go zones but, as the French nomenclature accurately indicates, ‘sensitive urban zones.’ In normal times, they are unthreatening, routine places. But they do unpredictably erupt, with car burnings, attacks on representatives of the state (including police), and riots.”

Pipes went on to say that he regretted calling the areas “no-go zones.”