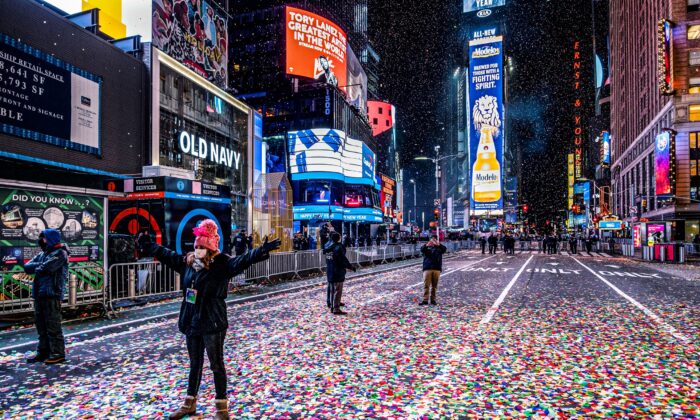 Due to lockdowns, only a few people were able observe the Times Square New Year's Eve ball drop in New York on Jan. 1, 2021. (Craig Ruttle/AP Photo)
By Emel Akan

Public health experts and politicians around the world have implemented compulsory lockdown policies to curb COVID-19 infection and death rates. But have these lockdown measures been successful in reducing mortality from the disease?

According to a new study released by Johns Hopkins University, lockdowns have had little to no effect on COVID-19 mortality.

As the world scrambles to contain COVID-19, many social scientists are studying huge data sets to explain the relationship between lockdowns and death rates.

Early epidemiological studies predicted large positive effects to result from these lockdown measures. For example, researchers at the Imperial College London estimated that such compulsory interventions could reduce death rates by up to 98 percent.

But a study by researchers Steve Hanke, Jonas Herby, and Lars Jonung challenges these early predictions.

“Overall, we conclude that lockdowns are not an effective way of reducing mortality rates during a pandemic, at least not during the first wave of the COVID-19 pandemic,” the researchers wrote in a paper that presented the findings of their study.

Hanke, a co-author of the paper, is a professor of applied economics at Johns Hopkins University and the founder and co-director of the Johns Hopkins Institute for Applied Economics, Global Health, and the Study of Business Enterprise. Herby is a special adviser at the Center for Political Studies in Copenhagen, Denmark. Jonung is a professor emeritus in economics at Lund University, Sweden.

The researchers employed meta-analysis, a quantitative study that combines the results of previous research studies.

NPIs are any government mandate that seeks to “limit internal movement, close schools and businesses, and ban international travel,” he said.

“An analysis of these qualified studies supports the conclusion that lockdowns have had little to no effect on COVID-19 mortality. Lockdown policies are ill-founded and should be rejected as a pandemic policy instrument,” Hanke said.

Governments have taken a wide range of measures in response to the COVID-19 outbreak since the first wave of the virus hit in 2020. A stringency index was created by Oxford University researchers to track and compare these government responses. The index tracked such responses in 186 countries.

According to the paper, studies that examine the lockdown strictness based on the stringency index found that “lockdowns in Europe and the United States reduced only COVID-19 mortality by 0.2% on average.”

In addition, the paper states that shelter-in-place orders were ineffective, reducing COVID-19 mortality by only 2.9 percent.

The researchers also examined studies looking at the effectiveness of specific NPIs and found “no evidence that lockdowns, school closures, border closures, and limiting gatherings have had a noticeable effect on COVID-19 mortality.”

However, closing non-essential businesses seems to have had some effect, researchers noted, which is likely to be driven by the closure of bars.

After three levels of screening, 34 studies were selected based on several eligibility criteria set by the researchers. For example, they only focused on mortality and excluded studies that use cases, hospitalizations, or other measures. Of those 34 eligible studies, 24 were included in the meta-analysis, according to the paper.

“While this meta-analysis concludes that lockdowns have had little to no public health effects, they have imposed enormous economic and social costs where they have been adopted,” the paper reads.

It also states that government responses were “strongly driven by the policies initiated in neighboring countries rather than by the severity of the pandemic in their own countries.”

“In short, it is not the severity of the pandemic that drives the adoption of lockdowns, but rather the propensity to copy policies initiated by neighboring countries,” the paper reads.