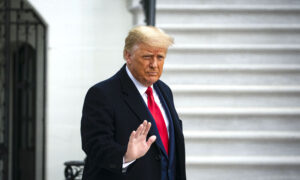 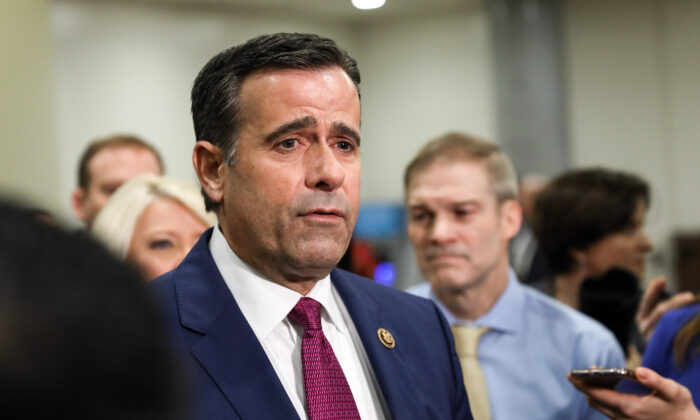 John Ratcliffe speaks to the media at the Capitol in Washington on Jan. 27, 2020. (Charlotte Cuthbertson/The Epoch Times)
National Security

DNI Report on Foreign Interference in Election Expected Next Month

Director of National Intelligence John Ratcliffe said a report on foreign threats to the election would come out next month which would show interference by China, Iran, and Russia, according to CBS News senior investigative correspondent Catherine Herridge.

“DNI Ratcliffe … has access to the most highly classified information that is held by the U.S. government and he told CBS News that there was foreign election interference by China, Iran, and Russia in November of this year,” CBS News senior investigative correspondent Catherine Herridge told CBSN on Dec. 3.

“He is anticipating a public report on those findings in January.”

Amanda Schoch, a spokesperson with the Office of the Director of National Intelligence (ODNI) said in a Dec. 16 statement that the intelligence community won’t meet the Dec. 18 deadline set by an executive order to report on foreign threats during this year’s election.

Schoch said they notified of the delay “by career intelligence officials.” She confirmed the report includes information about “relevant” foreign threats from the recent election.

“The IC has received relevant reporting since the election and a number of agencies have not finished coordinating on the product,” Schoch said, adding that Ratcliffe remains committed to an expeditious release of the report.

ODNI officials didn’t immediately respond to a request by The Epoch Times for comment.

“The intelligence is clear: Beijing intends to dominate the U.S. and the rest of the planet economically, militarily and technologically,” he wrote. “Many of China’s major public initiatives and prominent companies offer only a layer of camouflage to the activities of the Chinese Communist Party.”

Ratcliffe’s comments on China reflect those of others in the intelligence community. William Evanina, director of the National Counterintelligence and Security Center, said in an August statement that the U.S. government is “primarily concerned about the ongoing and potential activity by China, Russia, and Iran” when it comes to election interference.

Evanina said the CCP had been “expanding its influence efforts” before the November election in order to “shape the policy environment in the United States, pressure political figures it views as opposed to China’s interests, and deflect and counter criticism of China.”

Attorney Sidney Powell, who has filed a number of election-related lawsuits in multiple states, said there is more than enough evidence to prompt Trump to use his 2018 executive order on foreign interference. She said the order would give him a range of options.

“Given the level of foreign interference we can demonstrate, and the country has evidence of in our filings of foreign interference in the election, it’s more than sufficient to trigger the President’s executive order from 2018 that gives him all kinds of power—to do everything from seize assets, to freeze things, demand the impoundment of the machines,” Powell told The Epoch Times’ “American Thought Leaders” program.

“Under the emergency powers, he could even appoint a special prosecutor to look into this, which is exactly what needs to happen.”

Powell also asserted that the CCP may have played a role in influencing the election.

“We know that there were hundreds of thousands of fraudulent ballots imported into the country, likely from China. We have video of some coming across the border from Mexico.”

The ODNI report, Powell believes, will have huge implications.

“If that report is an honest report, it’s going to blow the mind of every citizen in the country who’s willing to look at the truth and the facts, because we’ve never witnessed anything like this in the history of this country,” she said. “And it’s got to be stopped right now or there will never be a free and fair election.”

Dec. 18 marks 45 days after the Nov. 3 general election, when, according to a 2018 executive order by President Donald Trump, the ODNI was expected to deliver a report detailing “to the maximum extent ascertainable” whether any interference attempts took place, and the nature of such interference, methods used, and who was involved and authorized such efforts.

But the order also states that information provided to the president doesn’t have to come from an official ODNI report.

“Nothing in this order shall prevent the head of any agency or any other appropriate official from tendering to the President, at any time through an appropriate channel, any analysis, information, assessment, or evaluation of foreign interference in a United States election,” it states.

The order directs the U.S. government to impose automatic sanctions on foreign nations, individuals, and entities who are found to be involved in attempts to interfere in U.S. elections.

Among the most troubling machine irregularities found so far is through Dominion Voting Systems, Powell asserted. On Dec. 14, a forensic audit of Dominion machines and software in Michigan showed the machines were designed to create “systematic fraud” and “influence election results,” data firm Allied Security Operations Groups said in a preliminary report.

“We conclude that the Dominion Voting System is intentionally and purposefully designed with inherent errors to create systemic fraud and influence election results,” Russell Ramsland Jr., co-founder of Allied Security Operations Group, said in the report.

“The system intentionally generates an enormously high number of ballot errors. The electronic ballots are then transferred for adjudication,” he added. “The intentional errors lead to bulk adjudication of ballots with no oversight, no transparency, and no audit trail.”

During her interview, Powell mentioned one of her witnesses, an alleged whistleblower who has a background with the Venezuelan military, including the national security guard detail of the Venezuelan president. The whistleblower, according an affidavit, outlined an alleged conspiracy between Smartmatic software executives, former Venezuelan dictator Hugo Chavez, and that country’s election officials to ensure Chavez won reelections and retained power for years.

The Epoch Times wasn’t able to independently verify the claims.

In a Dec. 15 statement, Dominion disputed the data firm’s findings, saying there were “no software ‘glitches’ that ‘switched’ votes in Antrim County or anywhere else.” Dominion said the errors they identified in Antrim County “were isolated human errors not involving Dominion.” Dominion CEO John Poulos said on Dec. 15, “No one has produced credible evidence of vote fraud or vote switching on Dominion systems because these things have not occurred.”

Dominion, on its website, denies it has any connection with Smartmatic, as well as allegations that it manipulated the vote. Smartmatic’s website dismisses any connections with Dominion and states that they have “no ties to governments or political parties.”