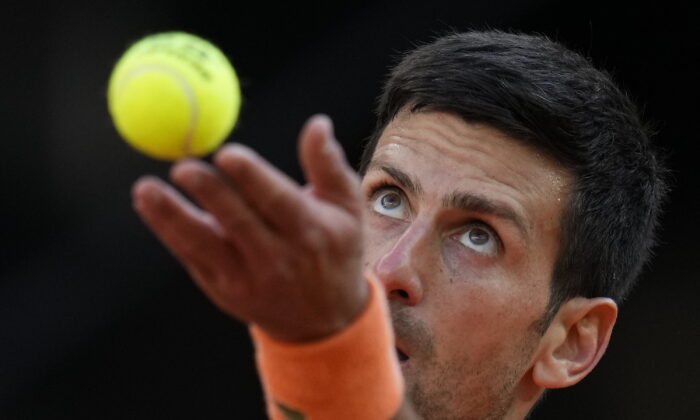 Djokovic Strikes a Blow for Medical Freedom in Rome

The Tennis Channel’s Jason Goodall, in wrapping up his commentary on Novak Djokovic’s victory in the Italian Open over Stefanos Tsitsipas (6-0, 7-6), acknowledged that the world’s No. 1 tennis player (for an astounding 370 weeks) is back in form in time to defend his title at the French Open, which begins May 22.

But Goodall added, in traditional sports press style (they’re all ultra-liberal, although the Tennis Channel is somewhat more genteel than ESPN), that some of Djokovic’s problems were “of his own making.”

Baloney! (That’s a euphemism for what we all say regularly in our homes.)

Djokovic’s problems were exclusively the making of several Australian bureaucrats and politicians, from the prime minister down, who thought they were serving “the science” by preventing the Serb from serving tennis balls at this year’s Australian Open, a tournament he had won a record nine times.

Backing them up were nearly 100 percent of the legacy media, the World Health Organization, and the U.S. Centers for Disease Control and Prevention, none of whom, it now appears, actually knew much of what they were talking about.

This gave the duly vaccinated Rafael Nadal the opportunity he needed to break the three-way Grand Slam tie he shared with Djokovic and Roger Federer at Novak’s favorite tournament. It would be poetic justice should Djokovic prevail in Paris.

While the back and forth between these all-time great athletes has provided entertainment for years, the Djokovic story is far more than that.

Novak Djokovic is a true hero of our times and a remarkably courageous person on and off the tennis court. In his way, he’s as brave as the magnificent array of doctors whose works are frequently highlighted here at The Epoch Times (Drs. Robert Malone, Peter McCullough, Scott Atlas, Jay Bhattacharya, and Vladimir Zelenko, to name just a few).

He’s also a rather impressive linguist and may speak more languages than Melania Trump.

Constantly offered the opportunity to just take some shots and return to the game to cement his position as the greatest of all time at his sport, not to mention add to his personal fortune (that was already sufficient), Djokovic declined—to the disapproval of the “good people” of the world who marched to the tune of Lord Fauci.

But the worst of it was his treatment by the sports press. Other than a few exceptions (Clay Travis and others), they are among the worst reactionary conformists extant. (I use the term reactionary to refer to today’s liberals and progressives because that’s what they are.) They virtually all ganged up on Djokovic as if they too understood “the science.”

Ironically, many of these people were those who in their past lives considered themselves nonconformists, rebels of some sort. They had devolved into the most obedient.

It’s doubtful that even a few of ESPN’s reporters or online personalities are aware of the serious questions now being raised about the efficacy of the vaccines; that in the case of Omicron, they may even exacerbate matters—or if they are, they don’t care. The ends justify their tawdry journalistic means.

Watching the finals of the women’s side of the Italian Open, I saw a fan holding a banner that read “Take Politics Out of Sports.”

No one realizes that more than Djokovic—I would imagine—having borne the brunt of it. It’s no surprise that, with Nadal on his side of the net this time, Novak is leading the charge to allow Russian and Belarusian players to compete at Wimbledon.

So far, they are being banned, although Daniil Medvedev, the leading Russian player and No. 2 in the world, has publicly called the Russian invasion of Ukraine “very upsetting,” two words that could get a man in deep trouble in his home country.

Take politics out of sports, indeed. And while we are at it, and more importantly, take it out of medicine.