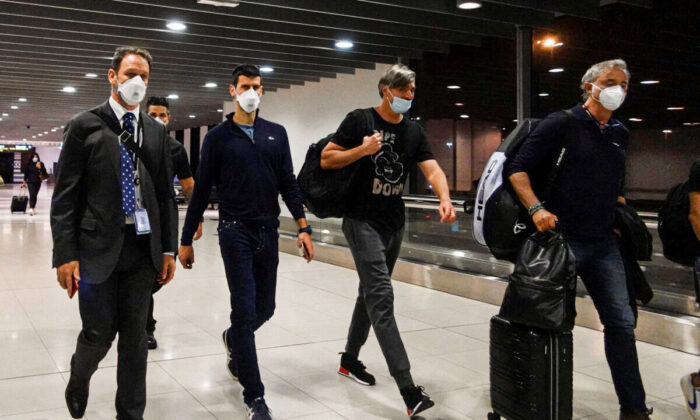 Serbian tennis player Novak Djokovic (2nd L) walks in Melbourne Airport before boarding a flight, after the Federal Court upheld a government decision to cancel his visa to play in the Australian Open, in Melbourne, Australia, on Jan. 16, 2022. (Loren Elliott/Reuters)
Australia

Nina Nguyen
Nina Nguyen is a reporter based in Sydney. She covers Australian news with a focus on social, cultural, and identity issues. She is fluent in Vietnamese. Contact her at nina.nguyen@epochtimes.com.au.
View profile
Follow
and Melanie Sun

World No. 1-ranked tennis player Novak Djokovic departed from Australia after the full federal court on Jan. 16 dismissed his challenge to a government decision revoking his visa on COVID-19-related grounds.

Chief Justice James Allsop said that Djokovic’s application to overturn the Australian immigration minister’s cancellation of his visa had been dismissed unanimously by himself as part of the court’s three-judge panel, alongside Justice Anthony Besanko and Justice David O’Callaghan, after almost eight hours of deliberations. All costs are to be paid for by Djokovic, who is facing a three-year ban from the country.

The 34-year-old Serbian player went to the airport in Melbourne just hours later. Federal agents escorted him and his team from the business lounge to the gate, where he boarded an Emirates flight bound for Dubai. The flight took off shortly before 11 p.m. local time.

Allsop offered to hear further arguments from both parties on the decision, which was given as soon as possible given the wider implications and international attention on the case, as well as Djokovic’s first-round Australian Open game against fellow Serb Miomir Kecmanovic that was scheduled for Jan. 17.

However, his legal team declined the invitation.

As a result, he lost his chance to defend his Grand Slam title at the Australian Open; he’s won a record nine Australian titles—including three in a row. A draw has decided that Salvatore Caruso will replace the No. 1 seed in the tournament’s first round.

Allsop said that the court’s reasons for its dismissal would be published as soon as possible. He noted that the decision of the Commonwealth judicial branch of government wasn’t about whether a minister from the executive branch of government made the right decision to deny entry to the tennis star, but about whether Immigration Minister Alex Hawke’s decision was lawful or legal in the context of the three grounds put forward by Djokovic’s appeal.

Hawke decided to cancel Djokovic’s visa because he isn’t vaccinated against COVID-19.

Allsop said: “These grounds focused on whether the decision was, for different reasons, irrational or legally unreasonable.

“It is no part of the function of the court to decide upon the merits or wisdom of the [government’s] decision.”

In a statement, Djokovic said that while he respected the ruling, he was “extremely disappointed with the court ruling … which means I cannot stay in Australia and participate in the Australian Open.”

“I will now be taking some time to rest and to recuperate, before making any further comments beyond this,” he said, while thanking his team and fans for their support, and asking for their focus to now return to supporting the tournament.

Meanwhile, Hawke applauded the court’s upholding his decision to exercise his power under the Migration Act, stressing the importance of Australia’s strong border protection in “safeguarding Australia’s social cohesion.”

“Australia’s strong border protection policies have kept us safe during the pandemic, resulting in one of the lowest death rates, strongest economic recoveries, and highest vaccination rates in the world,” Hawke said in a statement.

“Australians have made great sacrifices to get to this point and the Morrison Government is firmly committed to protecting this position, as the Australian people expect.”

The minister added that with Djokovic being viewed as an “icon,” the player’s presence in Australia could excite anti-vaccination sentiment, derail Australia’s vaccination efforts, and ultimately affect the health system.

Djokovic’s lawyers had argued in court that there was “no evidence” that such a scenario would occur, stressing that Djokovic’s deportation and the government’s “coercive action” would also achieve the same effect.

The immigration minister’s sentiment was echoed by Australian Prime Minister Scott Morrison, who stated that the visa cancellation was “made on health, safety, and good order grounds, on the basis that it was in the public interest to do so.”

“I welcome the decision to keep our borders strong and keep Australians safe,” Morrison said.

Djokovic’s visa was initially canceled on Jan. 6 at Melbourne’s international airport, hours after he arrived to participate in the first Grand Slam event of 2022 by a border official who said Djokovic didn’t qualify for a medical exemption.

The federal circuit court later overturned that decision, only for Hawke later to step in and revoke the visa again.