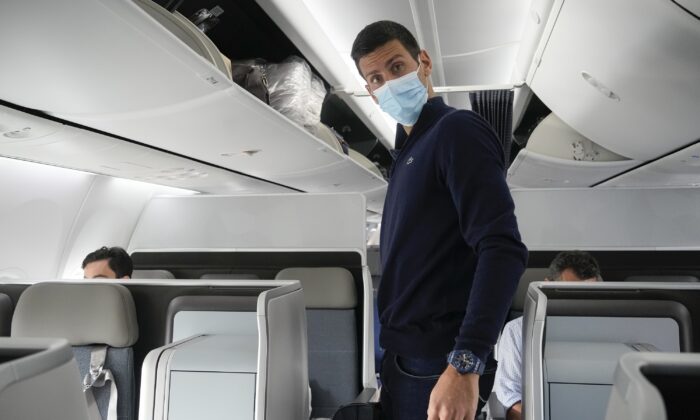 Novak Djokovic prepares to take his seat on a plane to Belgrade, in Dubai, United Arab Emirates, on Jan. 17, 2022. (Darko Bandic/AP Photo)
Viewpoints

Djokovic Actually the Big Winner in Australia—and So Are We

Having lost his bid this time for that record-breaking 21st Grand Slam title and been ejected from Australia, Novak Djokovic probably wasn’t feeling his best on the 15-hour flight from Sydney to Dubai, but in the long run, he will emerge the big victor in his duel with the Australian government.

He’s already something of a hero to many. According to the BBC, that flight was the most tracked on FlightRadar.

“Thousands of people are watching the player’s journey across Australia towards Dubai.”

How often does that happen?

I should really have titled this piece “Djokovic Defeats Australia Six-Love,” even though the Serb committed a few double faults himself along the way. Everyone does. “6-0 in favor of Novak” will be history’s ultimate score for what just transpired in Melbourne.

The Australian Open without Djokovic—the record nine-time winner of tournament—will have a gigantic asterisk next to it. If they persist in banning him for the supposedly required three years, the Open will have effectively been permanently tarnished as its country’s most important sporting event.

To a great extent, the idiotic (sorry to be so blunt, but it was hard to think of a more polite word that was remotely accurate) Australian officialdom have made a martyr out of Djokovic, escalating his importance beyond being the No. 1 tennis player in the world. Yes, many will still hate him, but the tide will turn inexorably because the tennis player is leading the inevitable anti-COVID curve.

Meanwhile, gripped by COVID hysteria that’s second to none—at least on a national level—Australia’s (aka Oz’s) government also literally has destroyed the reputation of their country in the process, removing it from millions of vacation bucket lists.

Ironically, while they are acting in this bizarre manner, the vaccines are facing more global skepticism than ever from scientists, doctors, and tellingly, front-line nurses who witness all manner of disasters. Reports on the Vaccine Adverse Reporting System (VAERS) are mounting and even the World Health Organization (WHO), normally communist China’s best friend, is advising against the booster.

The powers that be in Oz appear unaffected by this trend or, probably more exactly, terrified of it. The more it’s shown to be true that the vaccines are more dangerous than they are helpful for most people (mRNA inventor Dr. Robert Malone says no one under 65 should take one), the more they look like fools, totalitarian fools at that, who incarcerate people in the most intolerable conditions for exercising what should be, in a democracy, their rights.

And those miserable conditions have been publicized worldwide now, from the ramshackle COVID quarantine constructs like Quonset huts out of World War II to the Park Hotel where Djokovic was housed with the other unvaccinated as if they were lepers.

In many ways, these conditions resemble those in which our own alleged Jan. 6 “insurrectionists” are incarcerated.

Australia’s schizoid and sadistic treatment of Djokovic became just another symbol of this multinational mess. But it could mark its opera bouffe apotheosis.

That’s why I agree with Richard Fernandez of the Belmont Club, a Sydney resident and old friend of mine, that a tremendous backlash is brewing in Oz and, I would certainly add, here in the United States as well, once COVID is over.

And, as I wrote earlier and many others have surmised, the Omicron variant is heralding that end, behaving as most viruses do at the end of a pandemic, weakening as it becomes more communicative. Soon enough it will be another irritation we must face, but rarely a fatal one.

The problem engendered by this is that much of the leadership in Canberra and Washington will be very reluctant to let go of it.

We see that all around us, particularly in the Biden administration, which clings to COVID-19 just as Obama claimed conservatives clung to their guns and religion, only more so.

Resistance, however, is building. What will be its watchword? Who will be the first to say “Mr. Biden, tear off that mask!”

Fernandez put the situation this way: “Already, the signs of political disillusion are plain to see, from Joe Biden’s collapse in the polls, the SCOTUS rejection of his vaccine mandate, Boris Johnson’s slipping hold on power to Novak Djokovic’s amazing one-man stand against Australia’s vaccine visa policy: a worldwide storm is brewing and it will break over the political scene in 2022.”

That last is hard to deny if you were watching the amazing crowd at the Trump Rally in Florence, Arizona, the other night.

As for Novak Djokovic, I’m a bigger fan than I ever was.