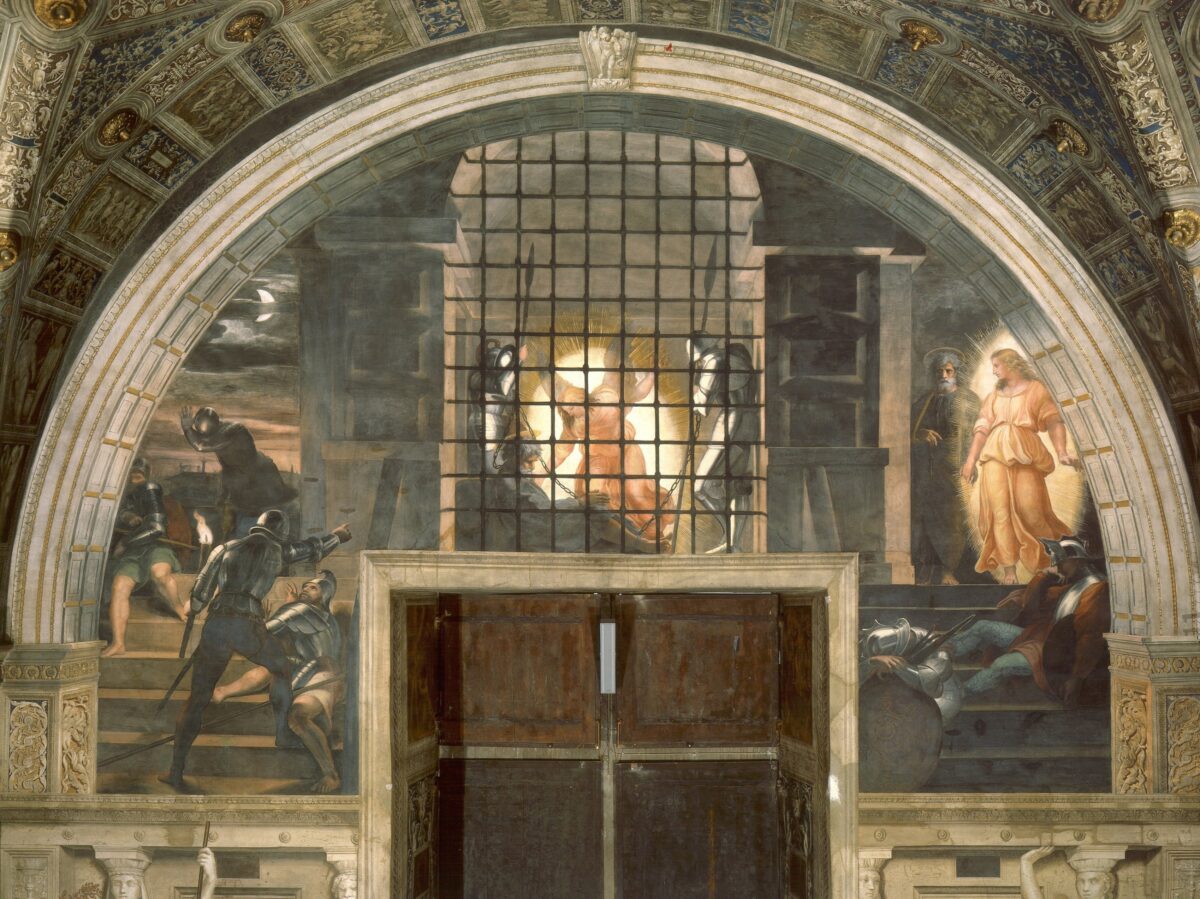 Divine Guidance to True Freedom: The ‘Liberation of Saint Peter’

Reaching Within: What traditional art offers the heart
BY Eric Bess TIMEApril 11, 2021 PRINT

The Renaissance painter Raphael Sanzio was born on April 6, 1483; he would die on his birthday, April 6, 1520. In 37 short years, Raphael created some of the greatest paintings known to the Western world. Approximately 500 years after his death, we celebrate and interpret one of his great paintings.

Raphael is well-known for his frescoes that decorate the walls of four papal apartments at the Vatican. Today, we will look at a fresco that illustrates the second room called the “Room of Heliodorus” (Stanza d’Eliodoro). Created in 1514, the fresco is titled “Liberation of Saint Peter.”

The Arrest and Liberation of St. Peter

As the story goes, King Herod was persecuting those who belonged to the followers of Christ. Peter was one of those whom Herod arrested and imprisoned.

Peter was bound with chains and watched by guards. He slept through the night until an angel arrived and woke him. The light of the angel filled the cell, and Peter was released from his chains without the guards awakening. He thought that he imagined the angel, but nonetheless he got dressed and followed the angel out of the cell.

Outside the cell, the angel and Peter passed, unnoticed, by two more guards before they came to the city gate, which opened by itself. The angel left when Peter departed the city, and Peter no longer thought the angel was a hallucination. He knew that God had sent the angel to assist him.

The guards searched for Peter the next day but were unable to find him. King Herod, angry, ordered the guards to be executed.

Raphael depicted the first part of the story in the center of the wall above the doorway. The scene is shown behind metal bars that are painted as if they are part of the wall.

With simple clothing and a halo above his head, Peter is shown asleep at the bottom left of the composition. Two guards leaning against the wall, one behind him and the other in front of him, are asleep as well. His hands and feet are chained to the two guards.

The angel has just appeared and fills the room with heavenly light. The angel reaches with one hand to heaven and uses the other to awaken Peter.

The wall to the right of the doorway shows the angel leading Peter out of his cell. The angel’s light still shines brightly and illuminates Peter, the walls, and the two sleeping guards whom they are about to pass.

The part of the wall to the left of the doorway depicts the final scene of the story. Peter and the angel are gone, and the guards are chastised for allowing Peter to escape.

One guard is sitting on a step, at the bottom right of the composition. A soldier hovers over him and points in the direction of the cell, which would now be empty. Toward the upper left of the composition appears another soldier who is about to strike a guard.

True Freedom Comes From the Divine

Peter is shown imprisoned and chained to two guards in the first scene. By whom was Peter imprisoned? He was imprisoned by King Herod. For me, Herod represents a resistance to the divine, to God, and his guards represent the chains that keep us imprisoned by our base desires. Is it then the case that resisting the divine imprisons us?

Some of us believe ourselves to be wholly devoted to divine things, concepts, and so on, in our daily lives. Quite often, however, if we go deeper into our spirits, we find that there’s more resistance to the divine than we would like to admit. Interestingly enough, our initial assuredness regarding our devotion prevents us from finding and removing such resistance.

By resistance to the divine, I mean everyday desires that distract us from concentrating on spiritual progress, on God. I mean the selfishness that obscures, by darkness, our ability to be honest with ourselves and others, to love our fellow human beings, and be patient during our troubles.

Are these everyday, selfish desires the very things that keep us imprisoned and distant from true freedom? Is it this subtle resistance to the divine, often escaping our awareness, that causes us to remain asleep and chained to our desires?

The divine, however, can lead us to freedom. Raphael depicts the angel as a source of light that awakens Peter. Without the divine, Peter remains asleep and will most likely be executed by King Herod, which suggests that Peter’s life will be undermined and taken by the very thing that resists the divine.

By way of the divine, Peter is “awakened” and led to freedom. With little effort, the angel—the very thing that seemed imagined initially—calmly walks Peter not only out of prison but also out of the very city that imprisons him.

All of the sleeping guards in the center and right side of the fresco appear docile. On the fresco’s left side, the guards are afraid, and the soldiers are angry. There’s a sense of fear and confusion, which suggests the true weakness of selfishness and base desire compared to the calm and effortless power of the divine.

How might we closely examine ourselves for resistance to the divine things in our lives? How might we navigate our way through and away from our selfish mindsets and tendencies? How might we allow the heavens to guide us on our journey to true freedom?

Eric Bess is a practicing representational artist and a doctoral candidate at the Institute for Doctoral Studies in the Visual Arts (IDSVA).