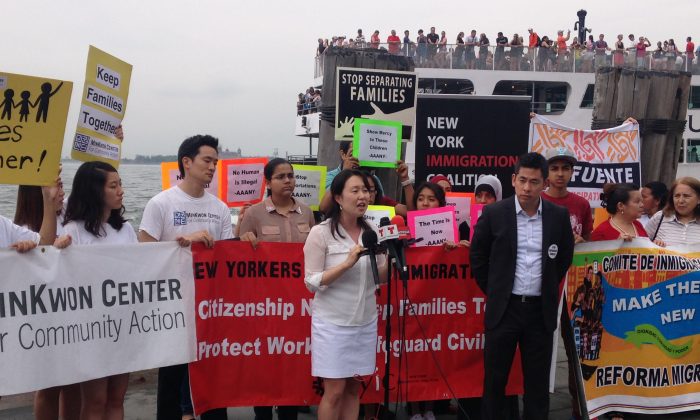 NEW YORK—In front of a misty Statue of Liberty, a culturally diverse group of immigration activists and supporters gathered in Battery Park on Monday. They called on President Obama to expand administrative relief for undocumented immigrants, including temporary relief such as protection from deportation and work authorization.

“All of our communities, whether the Latino, Asian, Arab, African, or European are all in for relief,” said Steven Choi, executive director of the New York Immigration Coalition.

In light of the influx of minors crossing the border, which Obama called a humanitarian crisis, immigration activists from a multitude of ethnic backgrounds gathered at the press conference to serve as a reminder for the larger scope of who is affected by immigration policy.

“The Bloomberg administration promised African teacher immigrants expedited visa and housing, but it was all broken promises,” said Russell Cheek , Manager of Programs & Development at The Black Institute, who attended the protest.

The Senate passed a comprehensive Immigration reform bill in 2013 that would provide millions of undocumented immigrants in the United States with a path to citizenship. However, House Speaker Boehner ignored the bill and it never reached the House floor.

In his June 30 speech on border security and immigration reform, President Obama blamed Congress’s inaction for the delay in immigration reform. He promised to fix what he could without the help of Congress. However, he didn’t provide details of his plans.

“Because House leadership has failed to act, families of the 11 million undocumented immigrants, 1.2 million of whom are Asian Americans, continue to be torn apart and their dreams are shattered,” said Grace Shim, executive director of the MinKwon Center for Community Action.

In New York there are close to half a million undocumented immigrants. Today’s rally emphasized that deferred action should be extended to a wider range of people, beyond youth who qualify for Deferred Action for Childhood Arrivals or are covered by the DREAM Act.

Though President Obama may be able to help a larger group of undocumented immigrants using executive action, in the long run, a comprehensive immigration reform plan is still needed to serve all immigrants, including those who are waiting in line to come into the United States legally to join their family.

“So immigration reform is not just for the undocumented but also for those who are waiting in the line,” Choi added.

President Obama met with immigration activists in June. He has directed White House officials to identify actions needed to fix the immigration system and promises to quickly implement their recommendations, which are due by the end of summer.