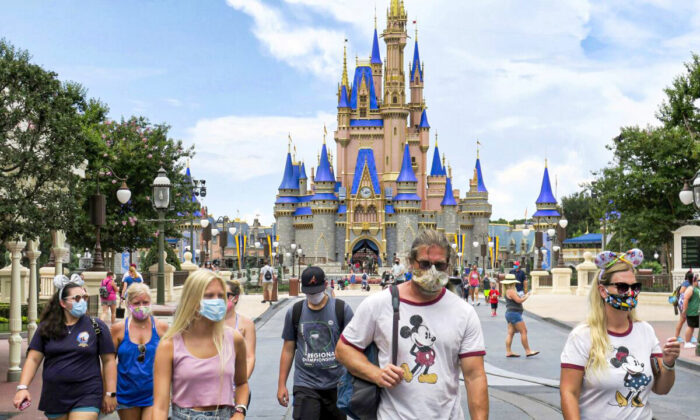 Disney’s market cap has shrunk by nearly $34 billion since the company expressed its full-throated opposition to a Florida law banning instruction of gender identity and sexual orientation in public schools for kindergarten through third grade.

Florida lawmakers in March passed HB 1557, dubbed by opponents as the “Don’t Say Gay” bill, which was signed into law by Florida Gov. Ron DeSantis on March 28.

That same day, Disney waded deeply into the controversy, issuing a statement that was highly critical of HB 1557, saying it was the company’s objective to have it repealed. From March 28, the day the company issued the statement, to April 22, Disney’s market cap has fallen by roughly $33.9 billion.

Backers of the legislation say it gives parents more power around deciding how and when topics relating to LGBT issues can be introduced to their children. It also gives parents the opportunity to sue school districts for violations of the rules set out in the legislation.

“Classroom instruction by school personnel or third parties on sexual orientation or gender identity may not occur in kindergarten through grade 3 or in a manner that is not age-appropriate or developmentally appropriate for students in accordance with state standards,” the measure (pdf) reads.

DeSantis said on the day he signed the legislation that “parents have every right to be informed about services offered to their child at school and should be protected from schools using classroom instruction to sexualize their kids as young as 5 years old.”

Disney noted that it was the company’s goal “for this law to be repealed by the legislature or struck down in the courts.”

Disney’s declaration of opposition to the bill prompted some parents’ groups to call for boycotts of the company’s products, movies, theme parks, and shows.

On April 22, DeSantis signed a legislature-passed measure to dissolve Walt Disney World’s self-governing status in Florida, with potential tax implications for the company.

DeSantis made reference on April 22 to Disney’s pledge to have HB 1557 repealed.

“I was very clear about saying, ‘You ain’t influencing me. I’m standing strong right here,’” he said. “Incredibly, they say, ‘We are going to work to repeal parents’ rights in Florida.’

“And I’m just thinking to myself, you’re a corporation based in Burbank, California, and you’re going to marshal your economic might to attack the parents of my state. We view that as a provocation, and we’re going to fight back against that.”