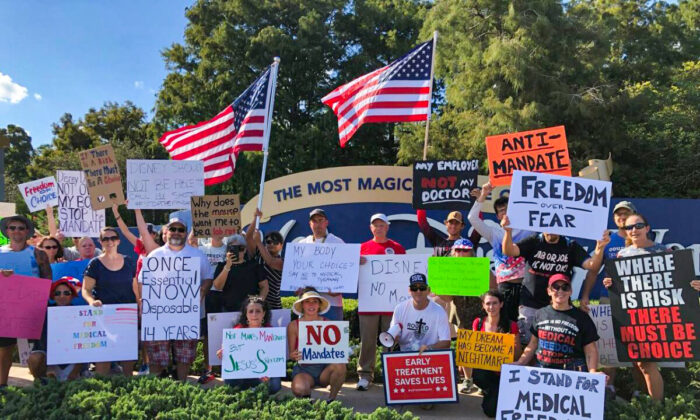 The Walt Disney Company punished and then fired three longtime employees because they refused the COVID-19 vaccine on religious grounds, according to a new lawsuit against the company.

On July 30, 2021, Disney announced that its employees would have to take one of the several COVID-19 vaccines to continue working with the company.

When Florida’s government forbade “vaccinate or terminate” policies, the company began a relentless push to vaccinate all employees, including those who had requested religious exemptions, the lawsuit states.

According to the plaintiffs, Disney burdened religious vaccine objectors with restrictions that went beyond its original pandemic policy.

“The mask, face shield, and distancing from cast and guest were clearly punitive measures designed to destroy my health, segregate me, harass, discriminate, and intimidate me into taking an experimental vaccine,” said Adam Pajer, one of the suing employees.

Pajer worked at Disney for seven years and had some leadership responsibilities.

Andreas had worked there for 21 years and in leadership for 17 years.

Cribb was at the company for 11 years and received the Walt Disney Legacy Award, its highest award for park employees.

All refused to take a COVID-19 vaccine, citing religious objections.

Pajer said he believed he had a religious obligation not to harm his body and that the vaccine was harmful; Andreas objected to covering her face and the contamination of her blood by vaccine ingredients for religious reasons; and Cribb objected because he believed the Jansen, Moderna, and Pfizer vaccines were made using cells from aborted babies.

But instead of accepting these exemption requests, Disney pushed back. All three found the company was slow to respond to their requests, leaving them wondering about the position of their jobs.

“[A Disney employee] proposed hypothetical questions to Ms Andreas, such as whether she would consent to a vaccine that did not contain aborted fetal cells. Ms Andreas was very uncomfortable about such an inappropriate line of questioning regarding her sincere religious beliefs,” the lawsuit reads.

Cribb said management asked him to abandon his religious convictions on the vaccine because the FDA approved it.

Pajer said managers yelled at him and lit a written statement about the discrimination he faced while he was still holding it.

Eventually, Disney denied religious exemptions to all three employees. It also refused to speak with their lawyers.

In Cribb’s case, “Counsel requested that Disney direct correspondence directly to him, and Disney flatly refused,” the lawsuit said.

Employees who refused to take the vaccine faced a series of restrictive safety measures that they argued amounted to coercion.

The unvaccinated employees said they had to wear masks while outside, wear N95 masks with “Warning” written on the front, eat in segregated areas, and not take off their masks even for a moment.

The company called for intrusive measures to test whether masks worked too. A technician sprayed a mist in employees’ faces, according to the employees’ lawyer.

Employees said that wearing a mask outside all day is stuffy and grueling in Florida’s intense heat. But Disney management showed little mercy.

“I was accused of pulling a mask away from my face just to catch my breath after being forced to wear it for the entirety of my shift, inside and outside, when other cast had the choice not to wear them at all,” said Pajer.

At the same time, Disney had ended outdoor mask mandates for unvaccinated guests.

The lawsuit said that pictures and videos during a 2022 outdoor Mardi Gras event showed that Cribb was likely the only person among hundreds of employees and guests at the resort wearing a mask.

“He was overwhelmed by the humiliation of Disney’s overt discrimination,” the lawsuit reads.

According to Andreas, these measures singled out unvaccinated employees and made them targets for a bullying campaign.

“We became the subject of harassment by other cast members and guests once the PPE provided a visual display of our private information,” she said.

The lawsuit said that these restrictions resembled what Disney demanded of COVID-19-exposed staff before the vaccines became available.

“The augmented protocols now suddenly enforced on plaintiffs consisted of harsh isolation and restrictions, causing serious breathing problems for plaintiffs, and making it nearly impossible to find a compliant manner and location in which to eat or drink while on shift,” the lawsuit reads.

Finally, Disney fired all three employees for refusing to take the vaccine.

“Suddenly, the same organization that had captivated my imagination in childhood with its one-of-a-kind magical appeal revealed its true self—a corporate machine bent on pursuing financial and political ends at any cost.”

The trio asked the court to reinstate their employment, end Disney’s enforcement of discriminatory protocols, and pay each plaintiff back for lost wages, lost benefits, attorney fees, and any other required relief.

“Disney is not above the law. Their actions in the past month have shown the public that Christians have no place in their parks or on their payroll,” said Andreas.