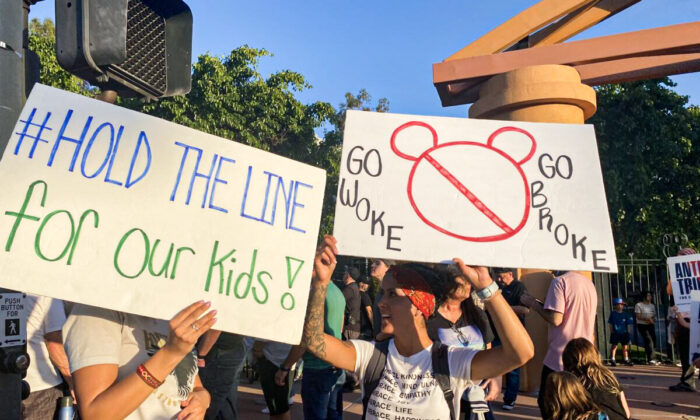 Protesters rally in opposition to The Walt Disney Company's stance against a recently passed Florida law outside of the company's headquarters in Burbank, Calif., on April 6, 2022. (Jill McLaughlin/The Epoch Times)
US News

“It’s outrageous what Disney is doing. .. the company is supposedly based itself on family-friendly entertainment, it is the opposite now that they’re advocating,” Kingston, CEO of Max King Realty, said.

The law prohibits teachers from instructing about sexual orientation and gender identity topics to children under the third grade. Proponents of the measure said that teaching young children about such topics is inappropriate and amounts to indoctrinating children with Marxist-underpinned gender ideology.

Opponents of the bill, including Chapek, argued that it marginalized LGBTQ people.

“I don’t think corporations should be in the business of advocating political positions or telling parents how to raise their children,” Kingstone recently told Epoch TV’s “China Insider” program.

“The leaders of publicly traded companies, particularly like Disney, have an obligation to their shareholders, not to their ideology. They’re not there to preach to their customers, they should be there to serve their customers,” he said.

The Florida businessman dismissed the argument that this move amounted to inappropriate government interference.

In his opinion, “the constitution provides for the common defense of the public,” he said, “This is the one area that the government should weigh into.”

The government has a role in protecting children from harm, which includes the case of ensuring those below the age of consent are not subjected to ideologies relating to gender and sexuality.

“That’s something that shouldn’t be discussed until they’re in their teens and predominantly by their family members, or people from their church or their synagogues or mosques,” Kingstone said.

The businessman pointed out that Disney’s social fight would bring “financial disaster” to the firm because their customers who are parents “don’t like being told how to raise their children.”

“What matters to … people of all faiths, religions, and backgrounds is their love for their children. And when any organization and the teachers union start to tell them that they’re going to decide what’s in their children’s best interests, not the parents, that’s when they lose on all accounts,” he said.