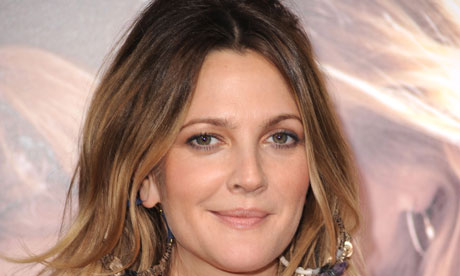 Drew Barrymore’s Sister Found Dead:  This is certainly nothing to make light of.  Former child star turned adult actress, producer director,  Drew Barrymore,  was forced to confirm that her half sister, Jessica Barrymore, was found dead in a car near San Diego.  Drew confirmed the horrible news in a statement to People magazine.  Drew  noted that she’d only met Jessica briefly in the past.  Jessica was reportedly found with an energy drink between her legs with dozens of white pills strewn about the seat.

Kanye and Kim Baby-Bickering?:   Are Kanye West and Kim Kardashian in a “marriage crisis” as some tabloids are reporting today?  Well, I’m not sure if mere disagreements about when Kim should have another child are grounds to deem the marriage in “crisis.”  Tabloids do so exaggerate. Big Sigh.  The reports are that Kanye wants to wait to have another child because he is so tied-up with career obligations and wants to be more settled for the next bundle of joy.  Kim however reportedly is ready to get baby number two underway and out of the way sooner than later.  Ugh.  The high drama.

Both posts received a barrage of criticism and were deleted, though some screenshots were still being shared on social media.

“We are deeply sorry to have used that artwork for the marketing materials promoting the September 11 opening in Australia,” Paramount Pictures Australia said in an emailed statement to Reuters.

“Combining that image and date was a mistake. We intended no offence and have taken immediate action to discontinue its use.”

The live-action reboot, starring Megan Fox and Johnny Knoxville and produced by “Transformers” director Michael Bay is due for release on Aug. 8 in the United States.

In Australia it will be released on Sept. 11, the thirteenth anniversary of the al Qaeda militant attacks on U.S. cities and the destruction of the World Trade Center twin towers in New York.

ScarJo Donning New Pixie Haircut:  Oh Joy.  Let’s get a look at ‘er!   When she changes her lip stain color we’ll let you know too!

Allison Williams, who stars in the HBO comedy “Girls,” will play Peter Pan opposite Christopher Walken as Captain Hook in the TV musical special “Peter Pan Live! on NBC,” the television network said on Wednesday.

The live television production of J.M. Barrie’s tale about a boy who can fly and never grows up will be broadcast on Dec. 4. It follows the success of last year’s live special of “The Sound of Music Live,” which starred country singer Carrie Underwood and drew an audience of 19 million.

“We think she will bring the perfect blend of boyish vulnerability and bravado to save the day against Christopher Walken’s powerful Captain Hook,” Robert Greenblatt, the chairman of NBC Entertainment, said in a statement.