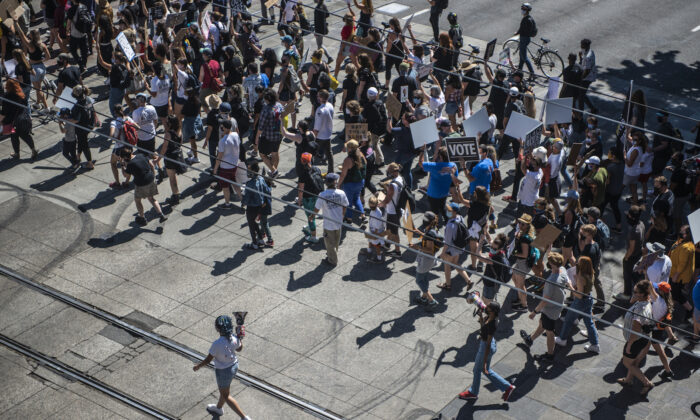 A disabled war veteran in Portland said he was hospitalized for serious injuries after a group of Black Lives Matter (BLM) agitators attacked and beat him last week.

Joe Hall, 53, said that BLM protesters allegedly armed with rifles surrounded his car when he exited his work truck, Fox 12 in Portland reported. Hall said he was driving through the area after finishing a job to his next one, and the crowd stopped his work truck as they blocked the road—a common tactic used by the Marxist group.

“All of a sudden these agitators come out, screaming, pounding on my truck,” Hall told the Fox station, adding that when he tried to drive around the group, he stopped because he thought he hit something with his vehicle.

“By this time I’ve got five people surrounding my vehicle, AR-15s, AK-47s,” Hall, who served in the Marine Corps and Army, recalled. “I pulled my .38 out of my right pocket and pointed it at the ground and told them if a weapon points at me again, I will shoot to eliminate the threat.”

Hall said that someone then tackled him and grabbed his pistol before the group started kicking and hitting him, according to the station.

Describing his injuries, the veteran said he suffered a “partially collapsed left lung” along with broken ribs, a broken collarbone, head trauma, and spinal injuries.

“It looked like he was face down and then people were kneeling on top of him,” a witness told the Fox affiliate.

Social media footage posted last week showed Black Lives Matter and Antifa agitators surrounding vehicles on a road. In one instance, one of the agitators smashed a person’s van and held them at gunpoint.

The Epoch Times has contacted the Portland Police Bureau for comment.

Hall, like many other Portland residents, said he’s leaving for good.

“I’m done, I’m done working in Portland,” Hall told Fox12. “I’m shutting my business down and I’m probably not going to be coming back.”

Several weeks ago, Portland Mayor Ted Wheeler asked the public to help identify Antifa agitators and demonstrators who engaged in acts of violence.

“They want to burn,” Wheeler said in a video in late April. “They want to bash, like they did to the nonprofit Boys and Girls Club in Northeast. Really they want to intimidate. They want to assault.”

Wheeler added: “If BLM leaders can show the courage to stand up to this mob, then we all should … Make a stand and take our city back.”