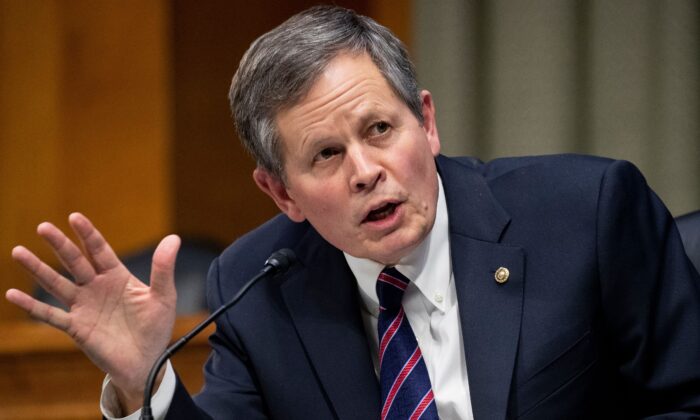 DirecTV’s plan to drop One America News Network (OAN) from its channel offerings is facing pushback from Republicans in Congress.

Sen. Rand Paul (R-Ky.) announced this week that he canceled his subscription to the satellite-TV provider.

“Why give money to people who hate us?” he said in a statement.

Sen. Steve Daines (R-Mont.), meanwhile, sent a letter (pdf) to DirecTV CEO Bill Morrow calling for the company to halt its plans to remove OAN from its lineup when the television network’s contract expires.

“There has not been sufficient justification from DirecTV as to why OAN’s contract was not renewed by your company,” the letter reads. “A vague ‘routine internal review’ and the lack of transparency with the viewers of OAN in Montana in your decision-making process is unacceptable and has the appearance of targeting supporters of former President Donald Trump.”

He asked Morrow to reevaluate the decision in light of DirecTV being the only option for live television in many parts of Montana.

“It is important to have a range of media outlets in today’s political atmosphere and by removing conservative content such as OAN on your platform; you are hindering Montanans ability to view their preferred outlet,” Daines wrote.

DirecTV, which has about 15 million subscribers, hasn’t responded to requests by The Epoch Times for comment.

A spokesperson for the company told Bloomberg that “a routine internal review” led to the decision not to renew its contract with OAN after the current one expires in April. Bloomberg reported that DirecTV is OAN’s largest distributor.

While OAN officials declined to comment, in a post on its website that has since been taken down, they urged supporters to call DirectTV to “demand OAN remains on your channel lineup.”

“Join the movement and stand up for freedom of the press!” OAN said, listing phone numbers for the company.

OAN was launched in 2004 in California. It describes itself as “a family owned and operated, independent media company focused on providing high quality national television programming to consumers via its national cable networks.”

Verizon FiOS also carries OAN, as do other some other television providers.

Other lawmakers weighed in against DirecTV’s plan, including Sen. Chuck Grassley (R-Iowa).

“DirecTV cutting OANN is latest example how corporate leftist media is silencing conservative voices in direct response to Biden administration & democrats smear campaign on allowing [people] to hear different viewpoints that are critical of the administration,” Grassley wrote on Twitter.

No Democrats have appeared to comment, but some last year pressured television carriers to stop hosting OAN, Fox News, and Newsmax.