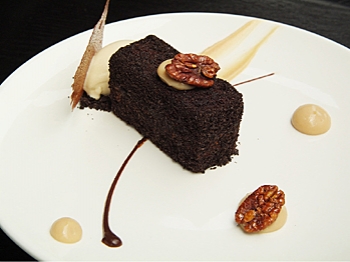 It tastes as good and refreshing as it looks. (Courtesy of Double Crown/Yuki Kuwana)
Food & Dining

The following recipes are from some of the most talented and creative chefs I have met recently—the celebrated chefs at the Double Crown Restaurant in New York, executive chef Brad Farmerie and pastry chef Ryan Butler—and the bartender, Brian, whose inspiration comes from the colonial days of the old British Empire.

I call them the knights of the Double Crown with tremendous respect. Their focus is British Indo-Asian cuisine with exotic ingredients that were brought back to England from the empire.

Fantasizing about a tea party? Finding yourself overwhelmed by thoughts of the British gentry, scenes from Alice in Wonderland, and Victorian décor?

The cucumber and black peppermint boozy tea is for the summer months, with elderflower, cucumber, and mint combining perfectly with the fresh botanical notes derived from the gin.
So easy and so delicious!

Crystal ice tea goblet (if you have one)

Preparation:
•    Heat the water in a kettle.
•    Steep black peppermint leaves in hot water for 5 minutes. Strain and chill.
•    Add remaining ingredients and stir well.
•    Pour over ice and garnish with finely diced cucumber and a few mint sprigs.

This soup not only has a beautiful flavor of carrots and exotic spices but also is beautiful in its presentation and is easy to make. Serve this in ornate teacups as a way to start your dinner party and it will get the conversation rolling and the guests smiling—I promise.
When carrots are at their best make a double batch, as it freezes well, and you’ll always have a showstopper waiting in the wings.

If the marshmallow looks like an intimidating part of the recipe, it can be left out, but it would be like a good joke without its punch line.

Give it a go, and you’ll see that you are a much better cook than you thought you were.

•    Combine coconut milk, water, honey, and lemon juice and set aside.
•    Combine the onion, garlic, ginger, butter, and cardamom in a pot and place on low heat.
•    Sweat the mix over low heat until everything is soft and translucent.
•    Add the grated carrots and turn heat to high.
•    Cook for 2 to 3 minutes, stirring, and then add liquids.
•    Bring to a boil, reduce the heat to a simmer, and cook until carrots are soft (about 30 minutes).
•    Puree in a food processor or blender until smooth, and add salt to taste.

•    Place a pot of water on high heat until it comes to a simmer.
•    Place the egg whites, chili flakes, and sugar in the bowl of an electric mixer. Place this bowl over the simmering water, stirring to melt the sugar into the egg white.
•    Separately, squeeze the excess water out of the gelatin sheets and place in a small mixing bowl. Place this bowl over the warm water until the gelatin melts (becomes liquid) and set aside.
•    Place the bowl with the egg whites, sugar, and chili into the electric mixer fitted with the whisk attachment.
•    Whisk the mixture until stiff peak forms.
•    Slow the speed down to medium and pour in melted gelatin. Whisk until incorporated.
•    Pour mixture onto a 1/2 sheet pan that has been lightly oiled and well dusted in cornstarch.
•    Sift more cornstarch over the top.
•    Refrigerate until firm
•    Cut the marshmallow into the desired size and shape

Heat the soup over medium heat and serve 5 to 6 ounce portions in teacups.

Place a marshmallow in the center of the soup. Using a blowtorch (or the broil setting on your oven), toast the marshmallow.

Drizzle the soup with pumpkin seed oil, sprinkle with toasted pumpkin seeds, and garnish with picked florets of cilantro.

When pastry chef Ryan Butler thinks of London, he envisions sitting in a pub with a pint of stout and some spiced pecans, probably with The Clash [English punk rock band] blaring on the radio. He decided to translate that vision onto a plate, added some bittersweet chocolate, and made an interesting little dessert.

Serve this torte with quenelles of stout ice cream and butter pecan puree. This recipe is a slightly pared down way to get delicious results.

Serve this to your most discerning friends. Turn on The Clash, and think of England.

•    Combine all the dry ingredients in a standing mixer.
•    Add in all the wet ingredients until incorporated.
•    Add the boiling water slowly until the mixture is combined.
•    Pour the batter into a greased 13×18-inch baking pan, and bake at 350 degrees for 12 minutes, until a tester comes out clean. Cool to room temperature.

•    Toss all ingredients in a bowl until evenly incorporated.
•    Spread on a greased cookie sheet in an even layer, and bake in an oven at 350 degrees Fahrenheit for 10 minutes until shiny.

Unmold the cake onto a cutting board, and slice the cake into two layers. Spread the filling evenly onto one half of the cake. Make a sandwich with the other half. Chill the torte for one hour. Slice into 3 1/2 inch x 1 inch slices. Garnish with spiced pecans and whipped crème fraiche and get ready to be happy.