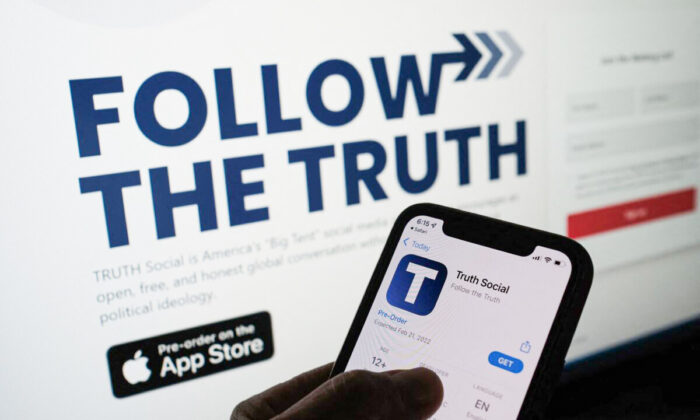 This illustration photo shows a person checking the app store on a smartphone for "Truth Social"—owned by Trump Media & Technology Group—with its website on a computer screen in the background, in Los Angeles, October 20, 2021. (Chris Delmas/AFP via Getty Images)
Donald Trump

Shares of the Digital World Acquisition Corp., a blank-check company funding a controversial social media venture, have skyrocketed following the release of the company’s flagship app.

The new social media app is a project affiliated with Donald Trump, and its name, Truth Social, bears a striking resemblance to the former president’s surname, consistent with his well-known flair for branding and self-promotion.

With the stock markets closed in honor of President’s Day at the time of the app’s debut, shares of Digital World have surged by over almost 30 percent in premarket trading on Tuesday, with prices cooling down later in the morning and rising somewhat more conservatively by market close.

The app launch was an immediate sensation, surging to the top spot on the Apple Store charts within hours of its debut. Demand for the app has been so high that many prospective users find themselves toward the bottom of a massive waitlist numbering in the hundreds of thousands.

Truth Social is not the first attempt to create a social media platform free of progressive censorship, but no prior effort has generated so much hype immediately upon launching.

Other alternative social media sites, such as Gettr and Parler, have also advertised themselves as free speech platforms, but have faced criticism for allegedly failing to uphold these ideals. Gettr has proven particularly censorious to dissident right-wing commentators including Nick Fuentes and Jon Miller, causing some to question its free speech commitments. Parler was also criticized by Gab CEO Andrew Torba, who alleged that the company had “bent the knee to Big Tech” in order to have its app restored to the Apple Store.

Furthermore, none of these platforms could accurately be called household names, and users of these platforms will find themselves communicating with a much smaller potential audience than they would find on mainstream sites such as Facebook or Twitter.

While name recognition will likely not be an issue for the new social media upstart, given its presidential backing, Truth Social must walk a delicate line as it attempts to foster free speech without inviting its removal from app stores, which are dominated by just two corporations in particular: Apple and Google, through their ownership of the Apple Store and Google Play Store, respectively. These two companies have used their domination of the market to deplatform apps deemed unsavory by their executives, such as Parler, Telegram, Gab, Infowars, and Tumblr, all of which were removed from one or both of the major app stores at different points.

Still, the creation of an alternative media platform could have significant ramifications for the 2024 presidential election. While Trump has not officially announced his campaign, his remarks at post-presidential rallies are widely interpreted as signaling his intention to run for a second term in the upcoming contest. The president recently hinted as much in an appearance on “The Clay Travis and Buck Sexton Show”, saying that he was unable to talk about the upcoming election on account of campaign finance laws, but reassuring his supporters that they would be “happy” with his decision.

Having a social media platform in his own camp could be a major asset for the former president, who was banned from most existing social media platforms in January 2021. This social media censorship has been a liability for president Trump, impairing his ability to communicate with supporters (Trump’s email list has largely failed to generate the same buzz as his polarizing tweets). While Facebook has offered the president an ostensible path to return to the platform, others such as Twitter have been obstinate in their refusal to platform him. With the 2024 election drawing closer, Truth Social may prove essential for allowing the former president to speak to supporters and exercise free speech in the public forum on a mass scale.

The future of Truth Social remains uncertain, and it is unclear whether the platform will receive significant engagement from users outside of Trump’s loyal base. However, the sensational debut of the new app has demonstrated that Trump content is still in high demand, and the market has responded by driving the platform’s blank-check company to impressive stock highs.