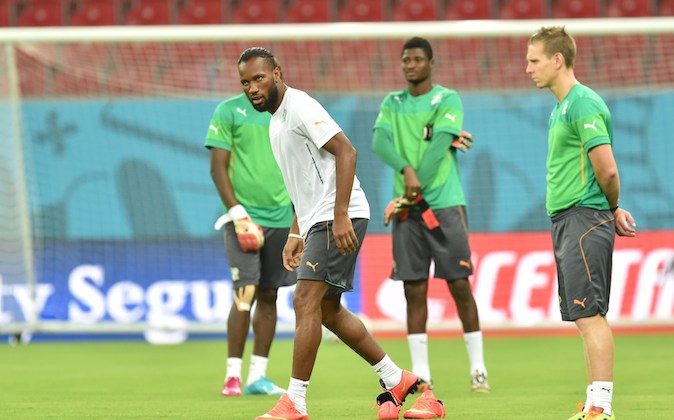 The 36-year-old was seen limping off the field during the team’s practice season on Wednesday.

Coach Sabri Lamouchi had said earlier that his squad is not 100 percent.

Yaya Toure, another influential Ivory Coast player recovering from injury, should also be fit to play.

Here is an Associated Press article on what to watch out for in the Amazon.

The Heat is On: World Cup Comes to the Amazon

RIO DE JANEIRO (AP) — The World Cup is coming to the Amazon.

After months of hype about how the humidity in the jungle city of Manaus will affect the players from England and Italy, and a week of intense attention on the patchy playing surface, Saturday’s match will determine which team feels the heat more.

The contest between two former World Cup winners is one of four matches on day three of the tournament. Colombia and Greece kick off proceedings, followed by Uruguay against Costa Rica. Japan and Ivory Coast should bring it to a close just before midnight in Brazil.

Here are some things to look for:

JUNGLE FEVER: The Italy and England camps have spent weeks doing everything possible to prepare for the conditions, from practicing in humid cities wearing long sleeves to riding exercise bikes in saunas.

The forecast is for temperatures of about 32 Celsius (90 degrees Fahrenheit) with humidity above 70 percent.

What the game really boils down to is three valuable points, with both teams desperate to open their campaigns with victories in Group D.

Andrea Pirlo and Mario Balotelli should lead the Italian charge, while England fans will be demanding big games from Wayne Rooney and Steven Gerrard.

Both squads have young players ready to make a mark, with 19-year-old Liverpool winger Raheem Sterling considered a chance to come off the bench for England and 21-year-old Marco Verratti a contender to join Pirlo in the Italian midfield.

Staff at the Arena da Amazonia had to activate emergency plans to revive the patchy turf during the week, and spent time on Friday using dye to ensure the grass at least looks green.

SUAREZ NO SURE THING: Coach Oscar Tabarez was still unsure on the eve of Uruguay’s opener against Costa Rica if he’d have his biggest star available.

Luis Suarez had arthroscopic surgery on his knee on May 22 and has rejoined regular training, but Tabarez said “we don’t want to jump the gun.”

He has prepared scenarios in case the Liverpool striker isn’t quite ready, with Edinson Cavani and Diego Forlan ready to start.

The 2010 semifinalists don’t want to waste an opportunity to pick up three points before their later group matches against England and Italy.

For a Costa Rica team lacking star power, Bryan Ruiz will be the key in midfield.

BEST FORM OF ATTACK IS? Colombia coach Jose Pekerman has been drilling his naturally attack-minded lineup on how to keep patience and structure against a heavily defense-oriented team. He even praised the rigid, no-frills structure that helped carry Greece to the 2004 European title.

The Greek team took offense, with 37-year-old captain Giorgos Karagounis reminding the Colombians that important games are about getting the basics right.

The Colombia attack will miss star forward Radamel Falcao, who is out with a knee injury. James Rodriguez remains the main playmaker.

NIGHTCAP: In what appears to be a wide open Group C, Japan is carrying Asian hopes of a place in the knockout stage and Ivory Coast is a contender to reach the same stage for Africa. With creative players on both sides, the tension of an opening match isn’t likely to stifle the flair.

One thing for certain is a vast TV audience, with the 10 p.m. start in Brazil translating into a 10 a.m. Sunday kickoff for viewers in Japan.

Ivory Coast coach Sabri Lamouchi concedes that not all of the members of his aging squad are 100 percent fit, but expects them all to be available for the game.

He’s hoping Yaya Toure will play despite injuring his hamstring in the last game of Manchester City’s Premier League-winning season, and veteran striker Didier Drogba will be OK despite limping in practice earlier in the week.

Japan was the first team to seal a spot in Brazil through qualifying and has a young and enthusiastic squad. Keisuke Honda and Shinji Kagawa are at the heart of the attack, and should be well supplied by Inter Milan’s Yuto Nagatomo.