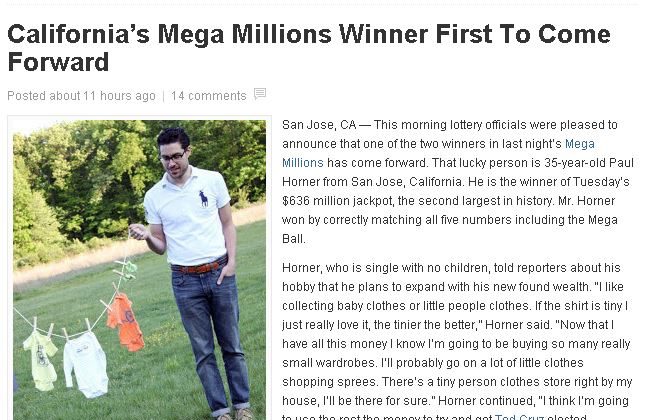 Did Paul Horner Win the California Mega Millions Jackpot? No, It’s a Hoax

Was Paul Horner the winner of the Mega Millions jackpot in San Jose, California, as it was reported?

No, because the report is a hoax.

The “California’s Mega Millions Winner First To Come Forward” comes from National Report, a website that makes up stories and presents them as real, though the details usually make the satire obvious.

In this case, there is a picture purportedly of Horner showing reporters “a few of his prized baby clothes from his massive collection,” and he says “I like collecting baby clothes or little people clothes. If the shirt is tiny I just really love it, the tinier the better,” the kind of inane quotes you’ll usually find at the National Report website.

The story also claims that Horner was going to use some of his money to try to get Ted Cruz elected to president, not because he shares values with Cruz, but because Horner thinks “he has an amazing smirk and could share that wonderful facial feature with the rest of the country.”

National Report has a clear disclaimer on its website: “National Report is a news and political satire web publication, which may or may not use real names, often in semi-real or mostly fictitious ways. All news articles contained within National Report are fiction, and presumably fake news. Any resemblance to the truth is purely coincidental.”

In reality, the person who bought the winning ticket in San Jose hasn’t come forward yet.

Earlier on Wednesday, Ira Curry came forward as the other Mega Millions winner, in Georgia.