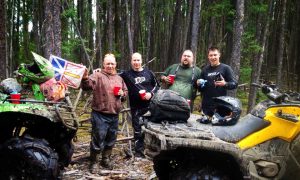 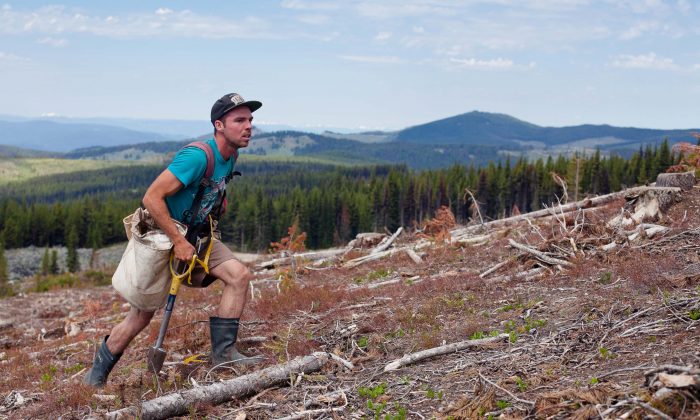 Diary of a Canadian Treeplanter: Best, Worst Job Ever

Leave all modern comforts far behind to…

-live in a tent in the Canadian north from spring (snow, frost, sub-freezing temperatures still frequently experienced) through July.

-share a shower trailer, containing four showers, with 60 to 80 people in a bush camp—the hot water only lasts for the first 10 (i.e. shower once a week).

-spend 10 hours a day outdoors through rain, hail, and mass swarms of mosquitoes (the cloud can be so thick around your head that they’re in your nose, eyes, ears, and every tiny gap in your clothing).

-reforest the large swaths of land cleared by loggers in the nation’s multi-billion-dollar industry.

-earn 8 to 18 cents a tree, depending on the landscape and the difficulty of planting. Plant more than 2,000 trees a day. A decent haul for a veteran treeplanter is about $300 a day; for a rookie, about $150.

-experience the beauty of the Canadian wilderness, from Rocky Mountain sunrises to the cool shade of pine valleys.

-spend your evenings around campfires with kindred spirits, your fellow treeplanters, guitars, songs, and general merrymaking.

American author Neale Donald Walsch once said, “Life begins at the end of your comfort zone.”

As a journalist and a long-time treeplanter, I’ve balked at the task of writing about this profound and life-changing experience. That’s not hyperbole—almost every Canadian treeplanter I know would agree this job really has such an impact.

Deciding what to include in an article about seven seasons of treeplanting is like whittling a giant Redwood tree down to a toothpick.

I’ll start with the worst of times, then move on to the best of times, and hope the broader perspective of the life and lifestyle of a treeplanter becomes clear.

The Worst of Times

It was my rookie year, 2006. I was 21 years old and I couldn’t face another summer of mundane work in the humid, smoggy city to earn money for my next year of university. I bought some camping gear and hopped on a Greyhound bus that took me more than 24 hours north of Toronto to a camp outside of Fort Frances, Ontario.

Tara MacIsaac on the last day of her rookie treeplanting season near Fort Frances, Ontario, Canada, in 2006. (Courtesy of Tara MacIsaac)

I won’t describe my first day, nor how I became acquainted with the job, the people, and the life. I’ll fast forward to my worst day, a few weeks in.

I’d traveled an hour or so in a big van with my crew of 12 after a breakfast back at camp.

A hot breakfast was dished up by the cooks, Genia and Madalina. About 60 planters filled the long tables, all storing up much-needed energy for the day—a disheveled bunch, with many bushy beards, bug-bitten faces, dreadlocks, raggedy bandanas, and hands so penetrated with dirt they would only return to their normal color after a week of regular showering and no planting.

I knew it would be a rough day of planting on the Canadian Shield—all rock, no soil, hard going. Days of working in this area had sapped my strength and motivation.

I raced to keep up with the veteran planters as we hiked half-an-hour into the clear-cut area that needed reforesting, known as “the block,” in treeplanter lingo.

The commute consisted of a winding, narrow path so overgrown I would have lost the way without the others. I followed them over a beaver dam; I scrambled over fallen trees, and balanced on logs and rocks to traverse streams.

We finally got to the “cache,” where the boxes of seedlings are kept, and my crewmate, Ryan, cracked a beer and relaxed to reward himself for the walk in. Caleb, known as the “workhorse” on the crew quickly stuffed trees in his planting bags and started planting. Treeplanters are a mixed bag.

Ryan Copps drinks a beer before a day of treeplanting after having walked half-an-hour through rough terrain to the work site. (Tara MacIsaac/Epoch Times)

My foreman came huffing along after us. He had to carry every box of trees in on his back—no all-terrain vehicles (ATVs) could get in there.

I filled my planting bags with some 300 seedlings, each about the size of my hand. I strapped the bags, which weigh approximately 30 to 40 pounds, around my waist, picked up my shovel, and headed into the section of land I was responsible for planting. The large swath of land a crew is responsible for is divided into smaller portions for each planter, marked with colored flagging tape.

A clear-cut is far from clear. It’s littered with fallen, broken logs, and a mat sometimes a foot or more deep of debris (twigs, et cetera). And underneath it all, in this location anyway, nothing but rock.

The clear-cuts reforested by treeplanters are far from clear. Here is one such clear-cut—though most of the lumber has been hauled away by loggers, plenty of fallen logs and debris is left behind for planters to crawl over and around looking for space to plant their trees. (Samira Bouaou/Epoch Times)

I reached a little valley. I had to climb about 10 feet down a rock face, balancing on fallen logs and small outcroppings. I prodded the ground in the low-lying area, which should have had, in theory, more soil than the rocky high areas—it didn’t.

A few more trees found themselves dubiously shoved into little patches of rocky earth. Another rock face of equal height then presented itself. I climbed up.

I repeated this process for about two hours and still had the majority of my 300 seedlings. I finally reached the back of my piece of land.

By mid-afternoon, the sun beat down and the temperature was somewhere around 30 degrees Celsius (86 degrees Fahrenheit). I was completely exhausted from climbing up and down with full planting bags.

I tossed one leg over a huge fallen log and hadn’t the strength to complete the move. I lay belly down on the log and picked at the bark. I felt like I was losing my mind.

I smoked a cigarette—I was still a smoker back then—and asked myself, “Can I do this? Should I quit?”

Thoughts of home filled my mind: a warm bed, warm showers everyday, no giant horse flies taking chunks out of my arms and neck, no little black flies swarming on any bit of exposed skin, no rocks to bang my shovel against, no feeling of failure every day when I tally how few trees I’ve planted, good coffee, no running into bee hives and hornet nests, no pouring rain, and no soakers (boots completely wet inside all day long; I developed trench foot that summer—it doesn’t matter what kind of footwear you have out there, soakers are unavoidable).

Home held one thing I couldn’t face, however—the feeling of failure. I couldn’t give up. Sure, I’d enjoy the comfort for a few days, but then regret would set in.

I picked myself up and stumbled through the rest of day, and the rest of the season, one tree at a time.

The Best of Times

I didn’t make much money in my first year, but in the six seasons that followed, I earned enough to emerge from university debt-free and also travel the world in the off-season, which I did three times, without having to work much outside of planting.

Becoming good at treeplanting and overcoming countless other tough days gave me great faith in myself. It helped me forge a connection with nature and develop camping skills that carried me through many off-season wilderness adventures.

At a low point in my rookie season, a monarch butterfly danced around me before it landed on my hand. This seemingly insignificant event was the beginning of a reawakening in my life.

I am now a dedicated practitioner of Falun Dafa, a meditation practice of mind and body. I believe that truthfulness, compassion, and endurance—Falun Dafa’s main principles—are the characteristic of the universe.

Some of my most valued friendships were forged through the joint hardships and joys down remote logging roads.

I’ve flown in helicopters to remote areas of the Rocky Mountains and close to Alaska to plant trees where only loggers, native peoples, and bears have tread. I’ve known the land I’ve planted so intimately that I could recognize a single tree, boulder, or patch of moss.

I’ve laughed with fellow planters as we waded waist-deep through ditches in some crazy terrain. I’ve swum in pristine lakes on my lunch break, I’ve had hawks and eagles as my companions through the work day. I’ve rejoiced at the cool shade of the tree line. I’ve worked my body so hard that I melted into my sleeping bag at night for the deepest and best sleep possible. I’ve zipped along mountain paths on the back of my foreman’s ATV.

A helicopter gears up to take a group of treeplanters to logged land hard to access by ground vehicles or foot. (Samira Bouaou/Epoch Times)

It was my third season and we were planting in a mountainous region near Hinton, Alberta. It had rained for four or five days straight. I planted continuously during the day—if I stopped for a few minutes, my wet hands would become painfully cold and I would shake rather than shiver.

Every item of clothing we owned was soaked. Some people’s tents had leaked, so even their bedclothes were soaked. The temperature at night was usually below freezing. Myself and a group of 20 or so planters took our dinners into the “dry tent,” where a wood stove gave off warmth and dirty planting clothes were strung up everywhere to dry. I always call it the “damp tent,” because things rarely come out completely dry.

We’d all been through the worst mental pressure a group of youth in North America—who hadn’t been to war or experienced extreme poverty or abuse—could experience. We all made it through together. We had a sense of our own perseverance and accomplishment. Each of us could describe this week to people back home, but no one would understand as well as our fellow planters in the tent at that moment.

We forgot our troubles, laughed heartily, and had a merry time, soaking up the warmth of the wood stove and of the kindred spirits around us.

Kamran Jithendran soaks in the warmth of the fire on a cold night in north-central British Columbia, Canada, at a treeplanting camp. (Samira Bouaou/Epoch Times)

Canada has 10 percent of the world’s forests.

The forestry industry contributed $23.5 billion to the Canadian economy in 2010.

By law, all forests harvested on Canada’s public land must be successfully regenerated.

An estimated 578 million seedlings were planted in 2009.