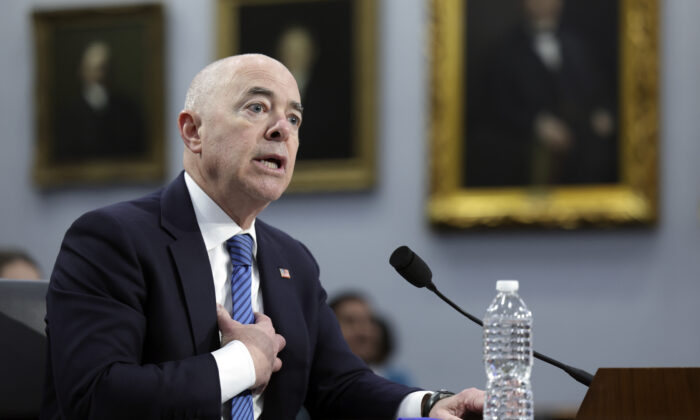 A “disinformation governance board” has been established at the Department of Homeland Security (DHS) to fight “misinformation” and will maintain “free speech, privacy, and civil rights” officials have confirmed.

DHS chief Alejandro Mayorkas revealed the new initiative to lawmakers during a congressional hearing on April 27 when asked by Congressman Jim Langevin (D-R.I.) about what the department was doing to ensure election security and prevent misinformation from being used in the electrical process ahead of the 2022 midterms.

“We have just established a disinformation governance board in the Department of Homeland Security to more effectively combat this threat, not only to election security but to our homeland security,” Mayorkas responded, noting that the new board will also focus on stopping the spread of misinformation in minority communities.

Nina Jankowicz, a Russian disinformation expert who served as a Disinformation Fellow at the Woodrow Wilson Center for International Scholars in Washington, confirmed in a statement later on Wednesday that she would be executive director of the newly-established board.

Cat’s out of the bag: here’s what I’ve been up to the past two months, and why I’ve been a bit quiet on here.

Honored to be serving in the Biden Administration @DHSgov and helping shape our counter-disinformation efforts. https://t.co/uN20vl7qqV pic.twitter.com/JEn4FqLdck

“Honored to be serving in the Biden Administration DHSgov and helping shape our counter-disinformation efforts,” Jankowicz wrote on Twitter, adding that “a HUGE focus of our work, and indeed, one of the key reasons the Board was established, is to maintain the Dept’s commitment [sic] to protecting free speech, privacy, civil rights, & civil liberties.”

“More to come as we dig into the big job ahead. For now, thanks for the support,” she added.

According to her official website, Jankowicz is an “internationally-recognized expert on disinformation and democratization” and has authored books such as “How to Lose the Information War” and “How to Be A Woman Online” the latter of which is set to be published in September and is an “examination of online abuse and disinformation and tips for fighting back”

A graduate of the Center for Eurasian, Russian, and East European Studies at Georgetown University’s School of Foreign Service, and an alumna of Bryn Mawr College, Jankowicz is fluent in Russian. She also speaks proficient Ukrainian and Polish and has advised the Ukrainian Foreign Ministry on disinformation and strategic communications under a Fulbright-Clinton Fellowship.

However, just weeks before the 2020 election, Jankowicz herself promoted false information about the alleged Hunter Biden laptop scandal, which was run by the New York Post and promptly suppressed by social media sites including Facebook and Twitter, the latter of which also locked the newspaper’s account for more than two weeks.

“Back on the “‘laptop from hell,’ apparently – Biden notes 50 former natsec officials and 5 former CIA heads that believe the laptop is a Russian influence op,” Jankowicz tweeted on Oct. 23.

Jankowicz defended her previous comment on Wednesday, writing on Twitter: “For those who believe this tweet is a key to all my views, it is simply a direct quote from both candidates during the final presidential debate. If you look at my timeline, you will see I was livetweeting that evening.”

More recently, Jankowicz said that “free speech absolutists” make her “shudder” in an apparent reference to billionaire Elon Musk who reached an agreement to acquire Twitter for $44 billion this week with plans to protect freedom of speech.

She has also defended the regulation of speech, saying, “The ‘free speech vs censorship’ framing is a false dichotomy.”

Responding to news of the newly-established department to be headed by Jankowicz, national security expert Brigitte Gabriel wrote on Twitter that “Joe Biden is creating his own Ministry of Truth” in reference to George Orwell’s dystopian novel “1984.”