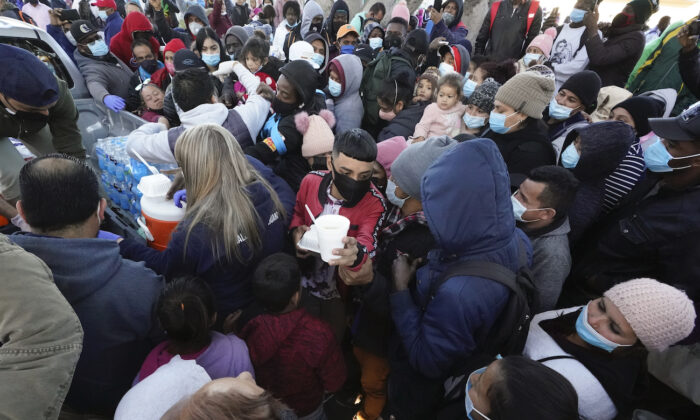 Migrants receive food as they wait for news at the border, in Tijuana, Mexico, on Feb. 19, 2021. (Gregory Bull/AP Photo)
US News

The Department of Homeland Security (DHS) is seeking volunteers from among its agencies to assist in dealing with an “overwhelming” migrant surge at the U.S.-Mexico border, as the Biden administration continues to deny that there’s a crisis.

“Today, I activated the Volunteer Force to support Customs and Border Protection (CBP) as they face a surge in migration along the Southwest Border,” DHS Secretary Alejandro Mayorkas said in an email to employees on March 8, obtained by several news outlets.

“You have likely seen the news about the overwhelming numbers of migrants seeking access to this country along the Southwest Border,” Mayorkas said.

“President Biden and I are committed to ensuring our Nation has a safe, orderly, and humane immigration system while continuing to balance all of the other critical DHS missions.”

Mayorkas said in his email that in 2019, under the Trump administration, more than 900 volunteers had been deployed to support their CBP colleagues “during a similar migration surge.”

“I also realize these are uncertain times and being away from home may be concerning. But today your colleagues need assistance carrying out their mission to help others, and DHS is going to support you while deployed,” he said. “Your health and wellbeing will remain priorities.”

The number of illegal crossings at the southern border has steadily risen since October 2020. The number of encounters at the southwest border between October 2020 and January was 296,259, an increase from 164,932 in the year-earlier period, according to data from the CBP, representing a 79.6 percent increase.

Since taking office on Jan. 20, President Joe Biden has signed a flurry of executive orders that dismantled the Trump administration’s border security measures.

The attorneys general of Arizona and Texas have sued Biden over a memo from the administration that ordered a freeze on the majority of deportations for 100 days. A federal judge temporarily blocked the order on Jan. 26.

The Biden administration’s proposal to legalize about 11 million illegal aliens living in the United States—something he vowed during his campaign—was formally introduced by Democrats in Congress last month.

After visiting the CBP facility in Edinburg, Texas, at the southern border over the weekend, Rep. Dan Crenshaw (R-Texas) described the situation as “unstable.” He noted that the areas he toured have been seeing a huge spike in migrants, with more than 6,000 apprehended at just one station.

On March 6, Texas began an operation to counter the growing crisis, activating and deploying National Guard troops and other law enforcement officers to the border to combat drug and human smuggling.

Biden hasn’t yet acknowledged the crisis or announced any concrete plans to address the growing numbers of illegal crossings. When asked by a reporter this week whether there’s a crisis at the border, Biden replied, “No, we’ll be able to handle it.”

The White House and the DHS didn’t immediately respond to a request by The Epoch Times for comment.