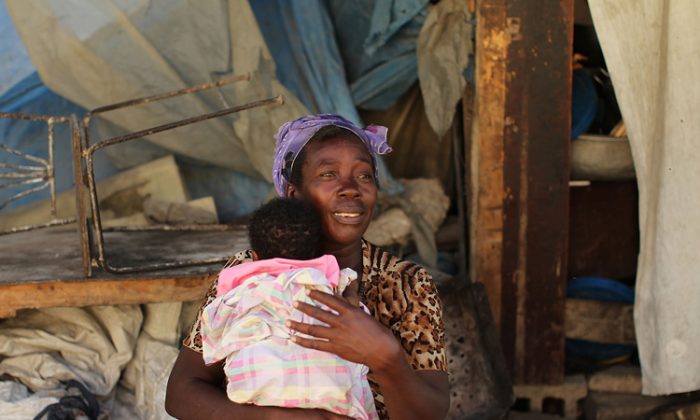 A woman holds her child in front of her temporary home on March 4, in Port-au-Prince, Haiti. While much of Haiti is still in crisis two years after the magnitude-7.0 quake, Western country aid budgets are shrinking amid the global recession. (Spencer Platt/Getty Images)
International

AMSTERDAM—For nearly one month Dutch politicians have locked themselves behind closed doors, negotiating how to decrease the country’s budget deficit to meet European requirements.

With the top leaders of the coalition government in painful talks on where to cut, one thing seems to be clear: overseas development aid will be reduced significantly.

Dutch media has quoted insiders saying the budget for development aid could be slashed by over 20 percent. This would push the Netherlands, which until recently was one of the world’s top five donors, below the United Nations’ benchmark for rich countries to allocate 0.7 percent of GNP to foreign aid.

In 2005, for example, the Netherlands spent 0.82 percent of GNP on aid, but this year it is expected to drop below 0.6 percent.

The Dutch situation is no exception. The global financial crisis has forced a number of members of the European Union to cut back on development aid, according to a report by the Organization for Economic Co-operation and Development (OECD) published on Wednesday.

Last year saw an overall decrease of nearly 3 percent in development aid, making it the first drop in global aid commitments since 1997.

Greece, which has been mired by debt problems, cut its foreign aid by nearly 40 percent in 2011, and Spain, which is currently experiencing a severe recession and high unemployment, cut its aid by 32 percent, the report said. Belgium cut its aid by around 13 percent and Austria by 14 percent.

Italy increased its foreign aid by 33 percent (partly because of an influx of refugees from South Africa), Sweden increased its aid by 10.5 percent, and Germany by 5.9 percent, OECD said.

OECD Secretary-General Angel Gurria said the fall in foreign aid “is a source of great concern, coming at a time when developing countries have been hit by the knock-on effect of the crisis and need it most,” according to a statement. “Aid is only a fraction of total flows to low-income countries, but these hard economic times also mean lower investment and lower exports.”

Gurria noted that countries that persist in giving out foreign aid despite unfavorable economic conditions show “that the crisis should not be used as an excuse to reduce development cooperation contributions.”

The news comes as aid organizations are warning of a race against the clock to prevent a catastrophic famine in the Sahel region of Africa—much like the hunger wave that swept across the Horn of Africa last year.

According to UNICEF Director Tony Lake, all elements are in place for a “perfect storm” creating a potential crisis that could affect 15 million people.

Yet aid organizations are increasingly struggling to acquire the funds needed. Last week, the United Nations raised concerns about a lack of funding to address Haiti’s needs in its attempt to recover from the 2010 earthquake and subsequent cholera epidemic. The international body says it has so far only received 8.5 percent of the total of $231 million it is seeking in funds this year.

“This cut in aid is a global scandal. Rich countries are using the economic crisis as an excuse to turn their backs on the world’s poorest at a time when they need help,” Jeremy Hobbs, executive director of Oxfam International in a statement.

According to the charity, the missing $3.4 billion as a result of cuts in global development aid could provide a full year’s worth of treatment for half of the world’s children infected with HIV. In total, the world’s rich countries donated $133 billion in aid in 2011.

According to the U.N. Millennium Development Goals, a contribution of 0.7 percent of GNP from the world’s richest countries would provide enough resources to meet the world’s development goals.

While in 2005, 16 out of the 22 donor countries either met the 0.7 percent benchmark or had agreed to make the target by 2015, the crisis is pushing these countries below their promised levels of commitment.

With reporting by Jack Phillips.