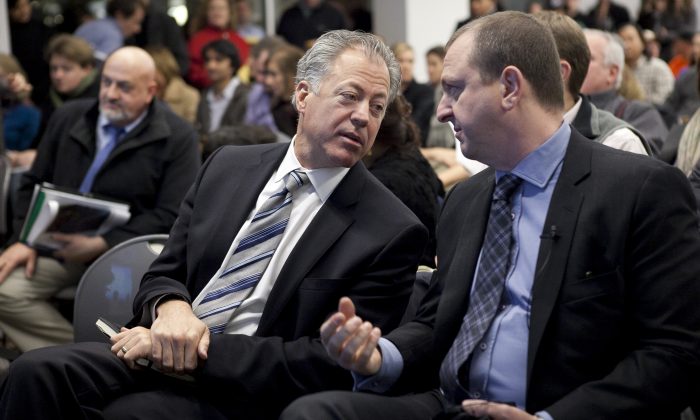 NEW YORK—Development plans for New York City’s historic South Street Seaport were called into question last week. After the local community board announced that plans have been halted in favor of a community-centric approach, the developer and the city’s economic development corporation denied any change in plans.

Community Board 1 said it decided to pause the uniform land use review process for the Howard Hughes Corporation (HHC) development plans for the South Street Seaport. The most controversial part of the plan was a 600-foot-tall mixed-use tower that would have an adjacent marina.

In a statement on the announcement, HHC flatly denied any change in its plans.

“The Howard Hughes Corporation is continuing to move forward with its proposed plan,” read the statement. “The process has not stopped.” The statement did confirm, however, that a community advisory board of some kind is being formed, with HHC’s support.

HHC made two major presentations to the community in the past few months with a detailed vision for the South Street Seaport to transform it into a shopping, dining, and entertainment hub. The plans include renovating and moving the Tin Building, building a new marina, and creating a 10,000-square-foot food market.

At a town hall meeting on Jan. 14, more than three dozen community members who commented on the record were largely against the plans. An overarching concern for the public and the city has been the presence of a high-rise tower at the seaport, which is characterized by historic, low-rise buildings and an unimpeded vista of the Brooklyn Bridge.