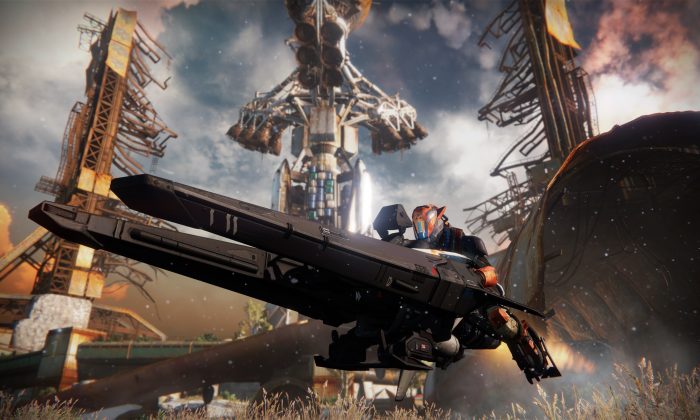 This photo provided by Activision shows a scene from the video game, "Destiny." The recent success of "Watch Dogs" and "Titanfall" is paving the way for several new video games that don't contain numbers in their titles to be hyped at next week's Electronic Entertainment Expo, the gaming industry's annual trade show held on June 10-12, 2014, in Los Angeles. With anticipation mounting for original games like “Destiny,” “The Order: 1886” and “Sunset Overdrive,” have game makers finally discovered the cure for sequelitis? (AP Photo/Activision)
Gaming

Destiny’s beta is over and it will be released Tuesday

According to Polygon, the game will be coming out on the PC but it’s unclear when.

“It is [a good fit], and it’s something we’re talking about and looking at very carefully, and obviously it makes a lot of sense with the genre and the type of game it is,” Erik Hirshberg, the CEO of Activision Publishing, told the website Polygon during E3. “You know, developing on PC is a different animal than developing for consoles and so we just want to make sure that we’re putting one foot in front of the other and getting it right, and that it’s of the highest possible quality. But obviously I see the same things about the natural fit,” he added.

It likely won’t ever be out on the Wii U.

“It’s great to see the next gen hardware is off to such a strong start and both the Xbox One and PS4 are well ahead of where their predecessors were at this point … but if you just woke up today and looked at where people are gaming, the majority of people are still on the legacy hardware,” he added.

Destiny, according to reports, is the most pre-ordered game in history.

In the game, players will take the role of a Guardian with three classes to choose from.

Xbox boss Phil Spencer also said users shouldn’t overlook the PS3 and Xbox One versions of the game. “I wouldn’t dismiss the 360 or PS3 versions, Bungie did a lot of work to make those great,” Spencer told GameSpot.

But according to Polygon, regarding a PC release, “Don’t hold your breath for an announcement in the next few months while the marketing blitz is focused on the existing products, but it’s safe to say that one day in the future, PC gamers will get their Destiny.”