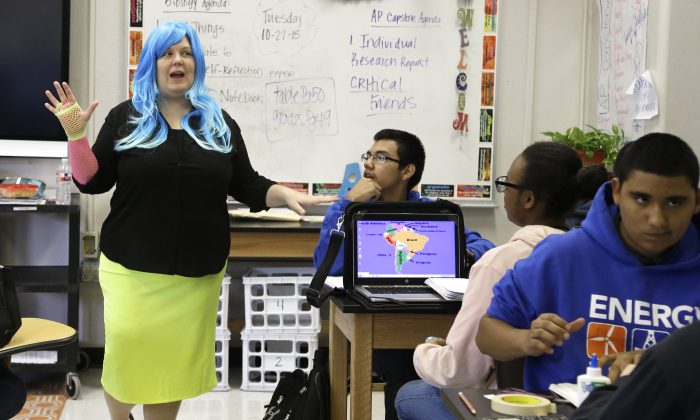 Biology teacher Amanda Alexander directs her students during class at Houston Energy Institute High School Tuesday, Oct. 27, 2015, in Houston. In Texas, education officials are gearing up to prepare more young people for the oil patch, showing the states unshakeable commitment to the energy sector despite the employment uncertainties. (AP Photo/Pat Sullivan)
US

HOUSTON—The oil industry is mired in its latest bust, with thousands of jobs evaporating like flares flaming out over natural gas wells. But in Texas, education officials are preparing more young people for the oil patch, showing the state’s unshakeable commitment to the energy sector despite the employment uncertainties.

The Houston school district is planning to expand its Energy Institute High School to around 1,000 students by 2017 and inaugurate a new 110,000-square-foot, $37 million facility. The 3-year-old institute is the nation’s only high school fully specializing in oil and energy careers.

In the oil-rich Permian Basin, two Midland high schools have begun “petroleum academies.” And state officials have approved vocational classes in oil production, authorizing all schools districts across Texas to teach them.

“We are in this downturn, but as a society we have a responsibility to not let that affect our workforce and to keep ahead of the game,” said Energy Institute Principal Lori Lambropoulos.

Other oil and gas states, including North Dakota, Louisiana, and Wyoming, offer technical training for high school students interested in the oil industry, but Texas’s program is more extensive, despite questions about whether there will be jobs in the near future for its graduates.

Layoffs began last year when crude prices plummeted from over $100 a barrel to about $45 now.

Layoffs began last year when crude prices plummeted from over $100 a barrel to about $45 now. According to the Bureau of Labor Statistics, oil and gas extraction jobs fell from 201,500 nationwide in October 2014 to around 187,000 this past October. In Texas alone, the economic sector including energy jobs contracted by an estimated 28,000 through a yearlong period ending in September.

“Fourteen months ago it was fracking forever,” said Robert Gilmer, head of the University of Houston’s Institute for Regional Forecasting. “And now we’re here.”

But the booms, like the last six-year-long one, provide rich paydays when they happen. And many in Texas insist things will rebound, although no one knows when. It took nearly two decades for oil prices to fully recover from the bust in the 1980s.

Trista Litong, a 16-year-old sophomore, said she’s not sweating falling oil prices because she believes her training will be useful regardless.

“The skills you learn here, how to talk to people, how to present in front of an audience, and working in groups, it really helps you in the future,” said Litong, who wakes up at 4:55 a.m. and braves a 90-minute bus ride to reach Energy Institute’s temporary campus in a scruffy section of downtown Houston.

A record 1,200 students applied for about 250 Energy Institute slots last fall. Oil industry donations have helped supplement public funding for the school’s costs, which are high because of the technology and teacher training required.

There are no sports teams, so the hallways are lined with artwork featuring pump jacks and oil platforms. Industry veterans appear as guest lecturers and the school’s advisory board includes executives from firms like Exxon-Mobile and Shell.

In Midland, home to more than half a dozen top energy firms, companies have helped the school district create the new petroleum academies for about 110 students. Classes address the basics of drilling, production, and pipeline maintenance, and students work toward safety certifications. They also take traditional highschool courses.

“I don’t think it’s that different than the tech industry where there was a time a decade and a half ago where it had a big downturn,” said Barry Russell, president of the Independent Petroleum Association of America, which helped found the Energy Institute High School.

But those who hung with tech, Russell added, “then saw the opportunities explode.”