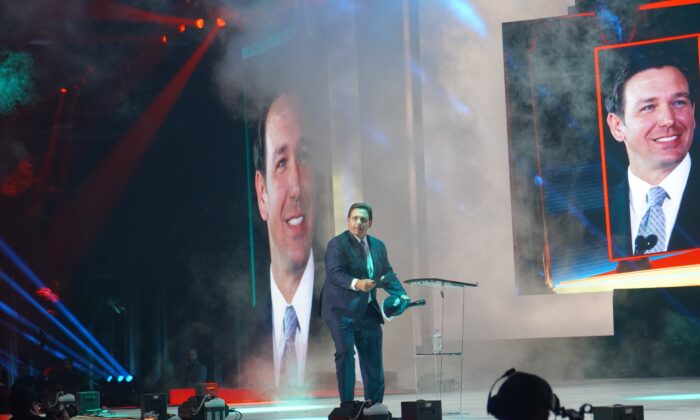 Florida Gov. Ron DeSantis launches a signed cap with his reelection campaign logo into the crowd as he arrives on stage to speak at the Student Action Summit in Tampa, Fla., on July 22, 2022. (Natasha Holt/The Epoch Times)
Republicans

DeSantis Welcomed Like a Pop Star at Conference for Young Conservatives

White fireworks shot up from the stage, music with a heavy bass boomed, and smoke billowed.

His appearance wrapped up the first day of the Student Action Summit, a three-day conference by Turning Point Action, part of Charlie Kirk’s Turning Point USA.

The annual gathering draws teens and 20-somethings from all over the country, and serves as a pep rally of conservatism.

A wide range of speakers, from politicians to television personalities, spent about 20-40 minutes each encouraging the young audience. They were urged to stand up for their values and truth, reject woke ideology and the efforts to indoctrinate them, get married and have children, and fight back against the overreach of government.

Most speakers poked fun at those espousing progressive and liberal ideologies and woke corporations, contrasting them against their conservative views. They urge the students to “save the country.”

He told a story about making the right decision as a young resident doctor, breaking hospital rules to perform life-saving surgery. The patient was dying, he said, and his supervisor wasn’t available to grant permission for the operation. Carson took him to the operating room anyway.

The patient survived and went on to become a psychologist, thanks to his decision to “do the right thing,” despite difficult circumstances, surgeon said.

He urged students to think for themselves and get involved in fighting Marxist policies creeping into society. And he urged them to stay hopeful.

“All this radicalism is waking people up, and that’s a good thing,” Carson said. “It’s always darkest before the dawn. And I believe that dawn is coming.”

‘Will You Join Me’

Next to rally the students who were jammed into the packed hall of the Tampa Convention Center was U.S. Sen. Josh Hawley (R-Mo.).

Hawley drew loud cheers for mentioning the Supreme Court decision in June to overturn Roe v. Wade, giving decisions about abortion restrictions back to states. His wife, attorney Erin Hawley, argued part of that case on the winning side, he said.

Hawley went on to mock social changes pushed by progressives, such as referring to women as “people with a birthing capacity” and saying it’s “transphobic” to reject the notion that “men can get pregnant.”

He urged students to get involved politically.

But, he said, “Unfortunately, the right has not always been there to defend this country.”

“Contemporary conservatives, a lot of times, they’ve been a heck of a lot more interested in fighting their foreign wars and in boosting the profits of multinational corporations and sending our jobs overseas and hollowing out our towns and industries,” he said.

He said that conservatives haven’t fought hard enough “for our families, and our neighborhoods, and our homes, and our churches,” he said. “And ladies and gentlemen, that has to change, and you’re the ones to change it.”

“If you’re waiting for the cavalry to arrive, to come and save the day, I’ve got news for you. Look left. Look right. You are the cavalry.”

And he challenged them to “embrace the truth.”

“These are the times when our lives make a difference,” Hawley said. “And I don’t know about you, but I look forward to telling my children, ‘In a time that mattered, at a time when everything was on the line, at a time when the future of this country was on the line, I did everything I could. I stood for the truth. I stood for America. I held the line.’

Their Policies are ‘Nuts’

Next, U.S. Sen. Mike Lee (R-Utah) echoed the warnings about the progressive ideology.

“They’re trying to demonize, delegitimize, denigrate, and ultimately disassemble the Supreme Court of the United States” by trying to pack it by giving President Joe Biden the power to appoint four more justices to the Supreme Court, he said.

“If they do that, we won’t have a Supreme Court anymore. We’ll have another political branch. We don’t want that, and we must stop it.”

He predicted a tsunami of Republican victories in the November mid-term elections.

“The more crazy they get, part of me weeps, and part of me celebrates,” he said.

That’s because liberals and progressives are bound to realize soon that their policies are “nuts,” he said.

“Revival is coming,” he predicted.

After Cruz, DeSantis brought the room’s energy to its highest level of the day. He described his leadership of Florida to cheers from the crowd.

He poked fun at Biden, and expressed frustration over the effects of the president’s policies on the country while wishing him a speedy recovery from COVID-19.

“And I also want to wish the United States of America a speedy recovery from Joe Biden,” he followed.

DeSantis is considered a frontrunner for the Republican nomination for president in 2024. But he has consistently deflected questions about a potential run for the White House.

As the room rumbled with applause and cheers for DeSantis, 31-year-old animator Zachary Johnson from Lake Alfred, Florida, pumped his fist and said, “You can’t stop the Florida Man!”

Johnson hopes DeSantis will be president of the United States one day, but not until he trains “an apprentice” to be the next governor of the state.

Whenever Johnson meets new Florida residents from Democrat-led states, he wastes no time urging them to vote Republican.

About 900 people move to his home state every day. But that worries him.

He feels good about the answers they usually give.

Indeed, the number of registered Republican voters bypassed Democrats for the first time in the state’s history in 2021.

This year, Republican registrations have surged further, outnumbering Democrats by more than 200,000, according to the Florida Department of State.

“Get ready for battle—put on the full armor of God,” he said. “This November is going to be the time America fought back.”