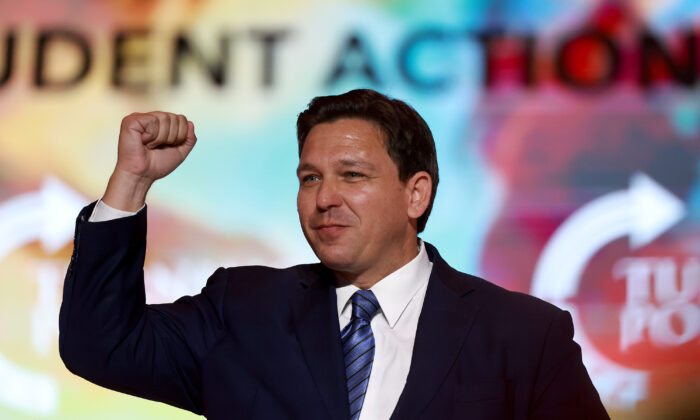 DeSantis to Take Action Against ESG

PUNTA GORDA, Fla.–Gov. Ron DeSantis on July 27 said he plans to take action against the environmental, social, and corporate governance (ESG) movement, calling it a threat to the American economy.

“The leveraging of corporate power to impose an ideological agenda on society represents an alarming trend,” DeSantis said in a statement. “From Wall Street banks to massive asset managers and big tech companies, we have seen the corporate elite use their economic power to impose policies on the country that they could not achieve at the ballot box.”

Most Americans are not aware of what ESG is and what its goal is and “leveraging corporate power to impose an ideological agenda on society” is an “alarming trend,” DeSantis said.

Morgan Stanley Capital International (MSCI), an investment research firm in New York, described ESG as “investing as the consideration of environmental, social and governance factors alongside financial factors in the investment decision-making process.”

But some view the movement as a sinister force. James Lindsay, the author of “Race Marxism,” described ESG as a “weapon in the hands of ‘social justice warriors’ to shake down corporations and a tool in the hands of those seeking to impose ‘one world government.'”

Florida House Speaker Designate Paul Renner said at Wednesday’s press conference that ESG is “a global elite weaponizing American capitalism against us,” making it a national security issue as well as a “pocketbook issue.”

He warned that going down this path would lead to companies being “choked off” of their ability to get financing and would do the same in agriculture.

“So, if you’re a meat eater, get ready,” he warned. “They’re against meat and so they’re driving up food prices – these people don’t care – (they) will open our borders, choke off our agriculture sector and basically weaken this country for their own local agenda.”

“They use their shareholder vote and their financial influence to politicize business on issues ranging from climate to social justice, these big three are transforming the fabric of American society in ways that a majority of Americans disagree with,” he said. “DeSantis is saying to the big three, ‘you aren’t going to politicize corporations with pension money.'”

In addition to the legislation, DeSantis will propose an update to the fiduciary duties of the State Board of Administration Investment fund managers and investment advisors to define factors that fiduciaries are to consider when making investment decisions. ESG criteria, environmental, social or corporate governance factors will not be included, the governor’s office said in a written statement.

The governor said he hoped that Florida will lead the way in getting “like-minded” states to create a retirement system voting bloc.

“A lot of these states could come together, and we’d have a lot of money, a lot of voting power. We could be a real check against a lot of the excesses that we’ve seen and probably have enough resources to beat back a lot of stuff,” he said.

Cindy Drukier and Tom Ozimek contributed to this report.