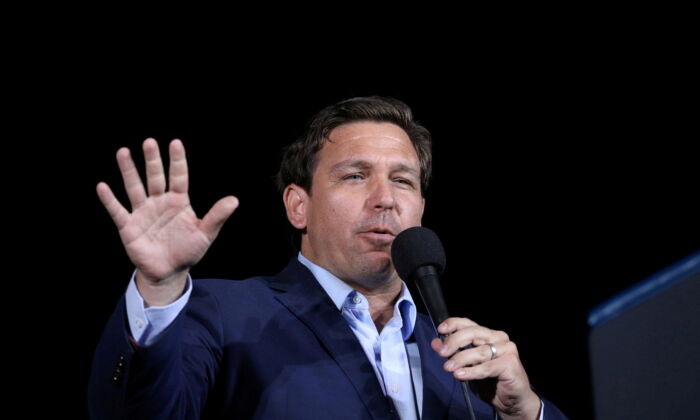 LAKELAND, Fla.—Gov. Ron DeSantis has announced that Florida is suing President Joe Biden, NASA Administrator Bill Nelson, and others over mandates requiring employees of federal contractors to be vaccinated for COVID-19.

In the complaint, Florida Attorney General Ashley Moody seeks an injunction to block the federal government from mandating that its contractors require all workers to be vaccinated by Dec. 8.

“We have a responsibility to stand up to those requiring vaccine mandates, or new mandates will just keep coming,” said DeSantis, a Republican.

While DeSantis was making the announcement on Oct. 28, space workers 100 miles to the east on the Atlantic coast were wrapping up an anti-mandate protest that had begun well before sunrise.

The employees have been told if they don’t have proof of vaccination when they show up for work on Dec. 1, their access to the base will be denied.

And that’s exactly what the lawsuit is designed to stop, DeSantis said at a news conference at the Florida Air Museum.

“We’ve been clear in the State of Florida that we want people to be able to work and provide for their families.

“In Florida, you have an opportunity to earn a living, and it should not depend on these shots.”

By requiring vaccinations of all employees of businesses providing services to the federal government, the Biden administration has created “heavy-handed mandates hanging over people’s heads.”

People have a wide variety of reasons, DeSantis said, for not wanting vaccines—religious objections, health conditions that make vaccines risky, or natural immunity following a recovery from COVID-19.

Many worked throughout the pandemic and now are being “kicked to the curb,” he said. “That’s just wrong.”

The Governor’s Office says new data show that Florida has the lowest per capita infection rate for COVID-19 in the continental United States.

And when a new federal report was released showing 194,000 jobs had been created across the nation in September, 84,500 of those jobs were in Florida.

DeSantis said requiring vaccinations would deal a serious blow to an already faltering economy if workers walk off jobs or are fired. And it will cause the supply-chain crisis to worsen as more Americans leave the workforce, he said.

He said that many institutions, including health care providers, will have a difficult time functioning if they lose workers to vaccine mandates.

Matthew Dawley, a 38-year-old Air Force veteran, has worked for 16 years as an EMT and firefighter for a contractor that provides those services for Cape Canaveral Space Force Station.

Dawley is not willing to get the vaccine because he believes he should have a right to choose what to put in his body. The idea that his government could compel him to take the vaccine, or any medical treatment, terrifies and enrages him.

But if he loses his job, “we’ll be broke,” says the married father of two. “We’re a single-income family.”

In May, DeSantis signed a bill that prohibits vaccine passports and, by doing so, also means businesses can’t ask their employees if they have been vaccinated, the governor said.

Others disagree, saying the bill doesn’t mention vaccine mandates, and therefore, does not make them unlawful in the state.

Either way, a state law can’t stop the U.S. Department of Defense from requiring vaccines for employees of their contractors, Dawley said.

However, he hopes workers can increase pressure on the federal government when vaccinated workers side with their unvaccinated colleagues at Cape Canaveral.

That’s the plan for many, Dawley says.

“If 900 people don’t show up for work, you can’t launch a rocket, so good luck,” he says. “They’re going to have an inoperable space center.”

Every worker there “plays an essential role in accomplishing our day-to-day mission,” said Heather Scott, spokeswoman for Space Launch Delta 45.

The facilities are “committed to continuing to deliver assured access to space for the warfighter and our nation,” she said.

The commercial space business is growing so fast that the main U.S. launch center—Cape Canaveral—may soon have more rocket launch requests than it can handle, a Florida Senate panel was told in September.

Purdy said the centre needed, within the next few years, to “build our processes and technologies so that we’re ready to launch a couple hundred a year, a couple a day.”

About 65 percent of those were commercial launches of private satellites and other orbital commerce, he said,  and more companies are talking about coming to launch their new, privately owned rockets.

With the industry thriving, why would the vaccinated leave their jobs, too?

“Most of us are veterans, and we’ve seen things like this imposed in other countries,” Dawley said. “We’re not having it. If you want to take away our rights and freedoms, we’re going to take away your ability to operate your space center.”

When he was hired, there were no health requirements other than passing an annual physical, he says. Now the rules have changed.

That’s another huge problem with a requirement for federal contractors to have vaccinated workers, DeSantis said. It’s not fair to change the rules after businesses have bid on and won government contracts.

“It’s not right for the federal government to come in and rewrite those contracts and then try to shoehorn this in,” DeSantis said.

“And then if you don’t comply, you either have to fire people, or … they’ll just cancel the contract entirely, even though this is something that you bid for, and you won fair and square.

“That’s not the way we think business should be done.”

At the news conferencing announcing the lawsuit to stop the mandates, Florida Attorney General Ashley Moody said she the mandates are a “complete and gross overreach of the federal government” and infringe on bodily autonomy.

“It’s unlawful!” she said. “This is not a dictatorship!”

Biden last month ordered the Occupational Safety and Health Administration (OSHA) to create a rule requiring all private employers with 100 or more employees to mandate vaccines or require them to submit to weekly COVID-19 testing. The rule could affect nearly 80 million workers, according to administration officials.

Businesses could face fines up to $14,000 per violation.

DeSantis said he believes the OSHA rule hasn’t been released yet, because “it has problems.”

He expects more litigation filed from Florida and said he he will soon announce the dates for a special session of the Florida Legislature. The main goal of that, he said, will be to “make sure people can keep their jobs.”

And he said he hopes his fight to keep people from losing their livelihoods, “based on their decision about an injection”, will help people around the country, as well.

He did not say how many Floridians may be facing job loss due to the federal mandates.

“There will be a lot of people in the crosshairs,” he said. “We said we’d take action, and we are.”