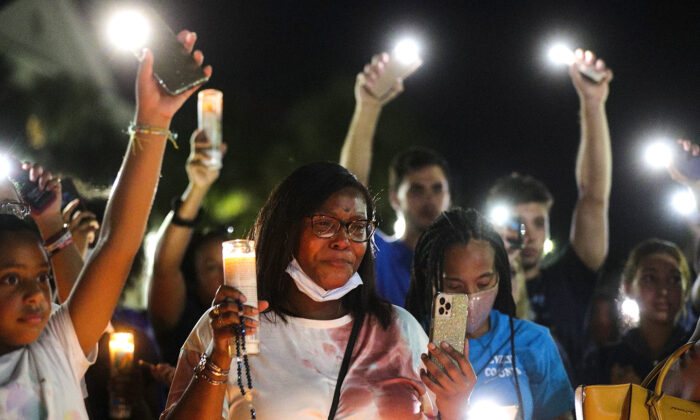 Attendees raise candles and phone flashlights to music during a candlelight vigil for Miya Marcano at Arden Villas in Orlando, Fla., Oct. 1, 2021. (Chasity Maynard/Orlando Sentinel via AP)
US

In a private ceremony, DeSantis said the bill, designated as “Miya’s Law,” was signed in honor of Miya Marcano, an Orlando college student who was killed in October 2021 by a maintenance worker at the apartment complex where she lived, according to a statement from the governor’s office.

Marcano was a 19-year-old Valencia College student who went missing, and was found dead a week later. Her body had been bound with duct tape near another apartment complex.

Law enforcement determined during their investigation that the maintenance worker had used a master key to access her apartment.

“Every tenant deserves to be safe in their own home,” DeSantis said in the statement. “By signing this legislation, we are making it safer to live in a rental unit and giving renters more peace of mind in their homes.”

“Miya’s death was a tragedy, and our prayers continue to be with the Marcano family,” he continued. “I am proud to act on their behalf.”

“Everything has been so dark and hectic throughout, but today we have a bit of a bright light,” she said in the statement.

“We fought so hard to get her bill where it is today. I’m just grateful for everyone—the public, our families—everyone who stood behind us and fought tirelessly to help us get where we are.”

Scarbriel and her daughter’s father thanked the lawmakers who sponsored the legislation and DeSantis for signing it into law.

“My daughter is my world,” Marlon Marcano said in a statement.

“With the passing of Miya’s Law, I am extremely grateful to everyone involved and I want the community to know that we will do everything we can to ensure what happened to our Miya doesn’t happen to anyone else.”

The new law requires landlords to maintain a key log of who has access to apartments and must provide tenants with 24 hours’ notice before entering units for non-emergency repairs. Before, it had been 12 hours. Meanwhile, the key log and background screenings will be “subject to inspection” annually and regulated by the Department of Business and Professional Regulation.

“While Miya’s family will never receive justice and nothing can bring back their daughter, I do hope that with this new law going into effect, in honor of Miya, that some peace will be brought to the family in knowing that their daughter’s death was not in vain,” Stewart said in a statement.

Marcano’s killer was identified by the Orange County Sheriff’s Office (OCSO) as Armando Caballero, 27.  Officers had found out he had been making unwanted advances toward her. Days after the murder, Caballero killed himself before Marcano’s body was discovered.

Marcano worked in the front office of her complex and was reported missing after she didn’t show up for work on Sept. 24, and subsequently missed a flight to Fort Lauderdale to visit her family.

A cause of death was never determined as the medical examiner described her body as “nearly completely skeletonized.” Black duct tape was found around her neck, wrists, and ankles, according to an autopsy report.

Sheriff’s investigators said Marcano was most likely killed inside her apartment after a struggle and then put in the trunk of Caballero’s car from her bedroom window.

In the past, Marcano’s family has accused OCSO of not taking Marcano’s disappearance seriously and maintained that because she had duct tape on her that she was more than likely alive when placed in the trunk of Caballero’s car.

Steward said that the family and the sheriff’s office as well as other groups were able to “work together to get the bill passed in the legislature.”

Stewart said they were able to add key protections and include a “provision to curb human trafficking that prohibits hourly rentals at lodging establishments.”

“This was the hardest bill I have ever had to push through in my lifetime,” the lawmaker said. “It was very challenging.”

While the law will apply to apartment complexes with 25 units or more, it doesn’t include condos, Stewart said.

“This is going to hopefully give [renters] a sense of security, knowing that if they’re going to live in apartments that there’s going to be safety measures in place.

“I think this will go a long way in cutting back on perhaps as little as theft, but also stalking and things of more serious nature.”