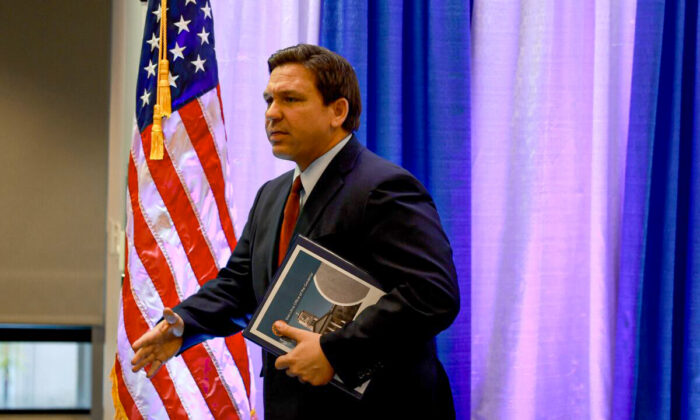 PUNTA GORDA, Fla.–Gov. Ron DeSantis on March 28 signed legislation that reinforces the fundamental rights of parents to make decisions about the education and well-being of their children.

The Parental Rights in Education measure, seen as controversial by some, prohibits classroom instruction on sexual orientation in kindergarten through third grade, as well as instruction that isn’t age-appropriate.

“We will make sure that parents can send their kids to school to get an education, not an indoctrination,” the Republican governor told a crowd at the Classical Preparatory School in Spring Hill.

Throughout the bill’s travels through committees as well as the state House and Senate, it has been criticized by some as being anti-LGBTQ and dubbed the “Don’t Say Gay” bill, although the word “gay” doesn’t appear in the verbiage of the legislation.

In response to the national jokes, DeSantis blamed corporate media and “sloganeering in fake narratives by leftist politicians” who are “injecting woke gender ideology” and “trying to camouflage their true intentions.”

“We will continue to recognize that, in the state of Florida, parents have a fundamental role in the education, health care, and well-being of their children.”

Despite the specific criticisms over the bill’s language, DeSantis told the crowd that opponents hadn’t “bothered to read the bill.”

On March 19 in Gainesville, 200 opponents of the bill gathered to denounce it as “anti-gay,” saying it “makes LGBTQ people less safe.” Some of the speakers said they believed that banning classroom instruction on gender identity and sexual orientation would increase the risk of suicide for children who have questions.

Stephen Gaskill, president of the LQBTQ+ Democratic caucus, issued an online statement saying that DeSantis “jumped at the opportunity to demonize LGBTQ+ Floridians. His shameful bigotry is cynically designed for partisan gain and authoritarian rule at the expense of LGBTQ+ students, educators, and families.”

DeSantis said: “Americans support the right of parents to be informed. … When parents are excluded from critical decisions affecting their child’s health and well-being at school, it sends the message to children that their parents’ input and authority are no longer important.”

January Littlejohn, a licensed mental health counselor, said her parental rights were violated when her 13-year-old daughter came home from school and told her that, during a “closed-door” meeting with her principal and others, she was asked which restroom she wanted to use and which sex she preferred to room with on overnight field trips. Littlejohn said she was never contacted by the school for permission to speak with her daughter about “such matters.”

DeSantis pointed out that the bill achieves three things. First, it prohibits classroom instruction about sexuality or gender identity in K–3 classrooms, saying that “those curriculums need to be age-appropriate.”

Second, the governor said, the law would ensure that at the beginning of every school year, parents will be notified about health care services offered at the school, “with the right to decline any service offer.”

Finally, the bill addresses questionnaires, or health screens, given to young students. Parents must be notified and grant permission to the school to give the questionnaires to their children.

Education Commissioner Richard Corcoran, who is stepping down at the end of April, said parents play the No. 1 role in a child’s life.

“Parents are not the enemy, they are a child’s first—and best—advocate,” he told the crowd. “This legislation safeguards the rights and responsibilities of parents to decide how best to raise their children.”