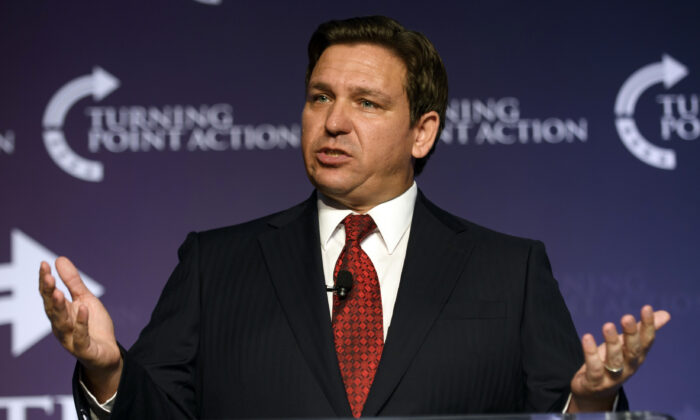 About 50 illegal immigrants from Venezuela arrived on two planes to Martha’s Vineyard on Wednesday afternoon. The governor’s communications director, Taryn Fenske, has said the planes were part of a $12 million state relocation program to “transport illegal immigrants to sanctuary destinations.”

“All those people in D.C. and New York were beating their chest when Trump was president, saying they were so proud to be sanctuary jurisdictions, saying how bad it was to have a secure border,” DeSantis continued. “The minute even a small fraction of what those border towns deal with every day is brought to their front door, they all of the sudden go berserk and they’re so upset that this is happening.”

“And it just shows you their virtue signaling is a fraud. They are supporting policies that are just frankly indefensible,” DeSantis added.

The arrival of illegal immigrants has sparked an outcry from some government officials in the Martha’s Vineyard area. Rep. Bill Keating (D-Mass.), who represents Massachusetts’ 9th Congressional District which encompasses the Vineyard, took to Twitter to accuse DeSantis of turning “human beings into political pawns.”

Massachusetts state Rep. Dylan Fernandes, a Democrat who represents areas that include the Vineyard, wrote on Twitter that DeSantis’s actions were “depraved,” and the Florida governor was trying to “gain cheap political points.”

“One of the reasons why we want to transport [is] because, obviously, it’s expensive if people are coming here. It taxes social services and all these other things,” DeSantis said.

He added: “Every community in America should be sharing in the burdens. It shouldn’t all fall on a handful of red states.”

DeSantis said Biden is at fault for the massive influx of aliens at the U.S.–Mexico border.

“We take what is happening at the southern border very seriously, unlike some, and unlike the president of the United States, who has refused to lift a finger to secure that border,” DeSantis said. “You’ve had millions and millions of people pouring across illegally, [and] record amount of fentanyl coming into our country. It is absolutely killing Americans in record numbers.”

“Just the sheer number of people, it’s not the way you run a country,” DeSantis added.

In a report published in August, the Federation for American Immigration Reform found that some 4.9 million illegal aliens crossed the border under Biden’s first 18 months in office.

Border agents have seized about 553,000 pounds of drugs so far in the current fiscal year, which ends later in September, according to data from U.S. Customs and Border Protection (CBP). On Wednesday, CBP agents seized roughly 276,000 fentanyl pills in the spare tire of a vehicle at the Port of Nogales, Arizona. About half of the pills were multi-colored.

The fentanyl crisis in the United States prompted a bipartisan group of 18 state attorneys general, led by Florida AG Ashley Moody, to send a letter to Biden on Sept. 14. They want the president to take “immediate and decisive action” to declare fentanyl a weapon of mass destruction, arguing that doing so would protect Americans from a “mass casualty event.”

Fentanyl is 100 times more potent than morphine and 50 times more powerful than heroin. It was responsible for 71,238 of the record 107,622 fatal drug overdoses in the United States in 2021, according to the U.S. Centers for Disease Control and Prevention.

“What would be the best is for Biden to do his damn job and secure the border,” DeSantis concluded.

Two buses carrying over 100 illegal immigrants arrived outside of Vice President Kamala Harris’s residence at the U.S. Observatory in the District of Columbia on Wednesday morning, according to a press release from Abbott’s office.

The Texas governor said that over 10,000 illegal immigrants from the border have been transported to Washington, New York City, and Chicago since April, bringing “much-needed relief to Texas’ overwhelmed border communities.”

White House press secretary Karine Jean-Pierre criticized both DeSantis and Abbott during a briefing on Thursday, accusing them of “using migrants as political pawns” and describing the incidents as “shameful” and “reckless.”

“Instead of working with us on solutions, Republicans are playing politics with human beings, using them as props,” Biden said. “What they’re doing is simply wrong. It’s un-American, it’s reckless, and we have a process in place to manage migrants at the border.”

“Republican officials should not interfere with that process by waging these political stunts,” Biden continued. “It’s long overdue for Senate Republicans to come to the table and provide a pathway for citizenship for Dreamers, those in temporary status, farm workers, and essential workers.”

Rep. Andy Biggs (R-Ariz.) took to Twitter to say that it was time for Democrat leaders to have a reality check.

“Democrat leaders must step down from their ivory towers and get with reality,” Biggs added. “Our nation is facing an invasion and it requires acknowledgment and action.”