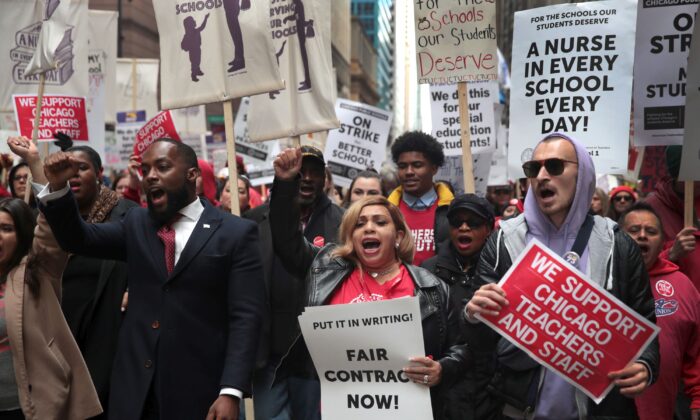 Florida Governor Ron DeSantis proposed a battery of education measures on Jan. 23 that he said would empower teachers, raise their pay, shorten term limits for school board members, and protect teachers from overreaching unions or school districts.

Speaking at a charter school in Jacksonville, DeSantis ticked off points in the proposed legislation. Key among them will be keeping funds targeted for teacher pay rises from being used for any other purposes.

DeSantis said many teachers had yet to get raises from two rounds of state funding in previous years, despite $2 billion being set aside for that purpose. The governor said now another billion dollars had been added to the total.

“We passed our most recent teacher pay increase. The legislature passed it last March, I signed it into law probably sometime in May, and even to this day, not every school district has raised the teacher salaries like they’re required to do,” DeSantis said.

Earlier rounds focused on raising the minimum teacher’s pay in the state from less than $40,000 to an average minimum of $48,000, making the career more attractive to college graduates, particularly those with loans to pay off, he said.

Under the legislation unions would have to be more transparent, would be audited annually, and there would be state investigations of suspected waste, fraud, and abuse.

Union dues would not be deducted automatically from teachers’ pay and they would have to notify members of the cost of membership annually. They would not be allowed to distribute union materials in the workplace and officials could not earn more than the highest-paid union member.

DeSantis said they sometimes now make twice as much.

School board members and superintendents could not accept a personal or work-related benefit—such as a secret “office account” from a school union—and they would face eight-year term limits, down from the current 12.

DeSantis noted a side issue.

Not only are school board elections non-partisan, but in some cases, candidates can’t even say what party he or she belongs to. DeSantis said legislation may include a provision making that explicit.

“They have a First Amendment right to do that,” the governor said.

Underlying the concern was that some candidates have been elected not clearly stating what they stand for, or intend to do once elected, he said.

“We want to embrace the idea that if you’re campaigning for these positions, you can identify yourself however you want to identify yourself, and if that’s with a political party, you’re absolutely able to do it.

Knowing What Candidates Stand For

“You have counties … in Southwest Florida that voted for me by like 40 points, and yet they’re electing people to school boards who are totally the opposite philosophy. But these people are running, saying that they’re sharing the philosophy, then they get on and they do something different.

“So we want transparency. We want people to be able to do what they think is best and educate voters to the maximum degree.”

On a teachers’ bill of rights, DeSantis said teachers “should not be put in a situation where they’re being told they have to violate clear policies of the state of Florida that are enacted in statute. And so these protections will include that now if you’re following the law, you’re good to go.

“It doesn’t matter if the school board or superintendent thinks otherwise.

“I think we’re going to have less of that going forward this year because I think, quite frankly, we’ve elected a lot of people to school boards across the state who are not going to want to behave in that fashion.”

“We want education, not indoctrination,” he said. “This course is on black history. One of the lessons is about Queer theory. Who would say an important part of black history is queer theory? That’s someone pushing an agenda on our kids.”

The state also objected to the course advocating positions like abolishing prisons.