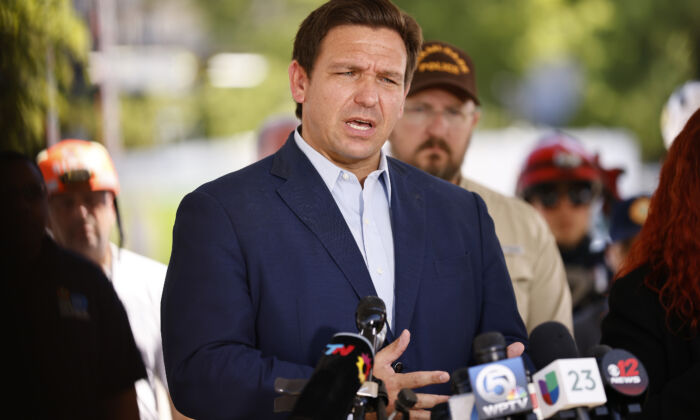 Dorothy Li
Dorothy Li is a reporter for The Epoch Times based in Europe.
View profile
and Eva Fu

Gov. Ron DeSantis raised concern over the Chinese Communist Party’s growing influence in Florida amid scrutiny of a Chinese firm’s purchase of 1,400 acres of land in the state in the hopes of building a primate breeding facility.

JOINN Laboratories CA Inc. purchased the land in Levy County, Florida, for about $5.5 million in July, state records show. Reports indicate the company plans to build a primate breeding and quarantine facility on the land.

Located in California, the lab is a subsidiary of drug developer JOINN Laboratories, a Beijing-based company whose founders have ties to the Chinese military. The lab’s purchase of the 10 parcels of land from L & T Cattle & Timber represents one of the biggest known Chinese acquisitions of U.S. land in recent years.

DeSantis’ office told The Epoch Times that the latest Chinese land buy is an example of the activities the Republican governor is working to combat.

“The governor has been consistently opposed to the Chinese Communist Party (CCP) ‘s growing influence in Florida, and this proposed facility is a prime example of the type of activity that we are acting to prohibit,” the governor’s office said in an emailed statement.

DeSantis is pushing for proposed legislation that would bar the purchase of agricultural land and lands near military bases by communist China and other foreign countries of concern.

“They [Chinese companies] pay a lot more than it’s [the land] worth; that’s why people are doing it. From a national security perspective, is that something that we wanna see?” DeSantis said on Sept. 22 at a press conference announcing the legislation.

“A lot of times, there’ll be companies that will put themselves out as private, but if you peel back the onion a little bit, they’re basically controlled by the Chinese government,” the governor added.

“We think that’s something that the U.S. as a whole needs to take much more seriously.”

The bill was part of a broader plan that DeSantis unveiled in September aimed at combating the “malign” influence from foreign countries, particularly communist China.

Standing behind a podium with a “Stop CCP Influence” sign, DeSantis also introduced legislation to safeguard higher education institutions’ intellectual property from the CCP, and signed an executive order to prohibit Florida’s government agencies from procuring or using technology products and services from Chinese companies.

Levy County’s planning and zoning department in September confirmed that it had been contacted by JOINN Laboratories over the possibility of building a primate quarantine and breeding facility on the purchased land.

In a statement on Sept. 22, Levy County said the purchased land is currently zoned for forestry-rural residential use only, which does not allow for the construction of such a facility. It added that any request for it to be rezoned was unlikely to be approved.

County officials told The Epoch Times that it had not yet received a formal rezoning request from JOINN Laboratories as of Nov. 3.

While the future of the property use is uncertain, the land buy has already drawn criticism over the biotech firm founders’ links to the Chinese military.

The purchaser’s parent company, JOINN Laboratories, is founded and controlled by Zhou Zhiwen and Feng Yuxia, a couple who both graduated from China’s Academy of Military Medical Sciences. The college is China’s leading medical research institution that was added to a U.S. trade blacklist in 2021 for allegedly supplying biotechnology to the Chinese military.

The land sale came at a time when Chinese firms’ buying of U.S. land is under considerable scrutiny.

An American subsidiary of Fufeng Group, a major producer of food additives in China with links to the CCP, recently purchased 370 acres of land in Grand Forks, North Dakota, where it plans to build a corn mill.

The site is roughly 12 miles from the Grand Forks Air Force Base, which is home to sensitive U.S. drone, satellite, and surveillance technology. GOP lawmakers have expressed concern that the deal may pose risks to national security, giving the communist regime opportunities for espionage.

The project is currently stalled pending a review by the Committee of Foreign Investments in the United States (CFIUS), an interagency panel that scrutinizes foreign investments for national security risks. Fufeng has denied that the project involves any security concerns.

DeSantis, at the September press conference, also sounded the alarm on the project in North Dakota.

“Why are they [the CCP] doing that? Of course, they want to get intelligence; they want to know what’s going on here in the United States,” DeSantis said at Miami Dade College.

“Yes, there’s the danger of having this land misused for intelligence or military purposes. But put that aside, we saw what happened with COVID, when almost all this stuff was made in China, why would you want them to be involved in our own food supply in our chain supply chain here in the United States?”

The Epoch Times has reached out to JOINN Laboratories CA for comment.